The former CIA and intelligence bigwig Graham Fuller predicts a gloomy outcome of the U.S-Russia proxy war in Ukraine. Gloomy for Ukraine, the U.S. and Europe:

Contrary to Washington’s triumphalist pronouncements, Russia is winning the war, Ukraine has lost the war. Any longer-term damage to Russia is open to debate.

American sanctions against Russia have turned out to be far more devastating to Europe than to Russia. The global economy has slowed and many developing nations face serious food shortages and risk of broad starvation.

There are already deep cracks in the European façade of so-called “NATO unity.” Western Europe will increasingly rue the day that it blindly followed the American Pied Piper to war against Russia. Indeed, this is not a Ukrainian-Russian war but an American-Russian war fought by proxy to the last Ukrainian.

Contrary to optimistic declarations, NATO may in fact ultimately emerge weakened. Western Europeans will think long and hard about the wisdom and deep costs of provoking deeper long term confrontations with Russia or other “competitors”of the US.

Europe will sooner or later return to the purchase of inexpensive Russian energy. Russia lies on the doorstep and a natural economic relationship with Russia will possess overwhelming logic in the end.

Europe already perceives the US as a declining power with an erratic and hypocritical foreign policy “vision” premised upon the desperate need to preserve “American leadership” in the world. America’s willingness to go to war to this end is increasingly dangerous to others.

All the above had already been said on this website in late February and March. But it is good to see that seasoned intelligence people are now coming to similar conclusions.

Two weeks ago I wrote that the Ukrainians will soon reach a breaking point. Today's 'clobber list' by the Russia Ministry of Defense has an additional part about Ukrainian troop loses that supports that take:

Since May 19, during the month, only the 14th Mechanised Brigade of the AFU has lost 2,100 persons who resulted dead and wounded. Due to low moral and psychological conditions, 800 persons destined for replenishing the losses of this unit, refused to go to the operational area and accused officers of incompetence, bribery and cronyism in paying money allowance.

About 100 servicemen of a reconnaissance unit of the 10th Mountain Assault Brigade have been relieved of combat duty and transported to Kremenchug for investigation.

A considerable part of the commanders of the 30th Mechanised Brigade of the AFU have abstracted themselves from managing their units and refuse to fulfil combat tasks. All kinds of pretexts are used for simulating illness. The majority of units have already been left without any officers.

A mechanized brigade has about 3,500 soldiers. In one month the Ukrainian 14th lost two third of its people. The replacements are not trained on mechanized equipment (tanks, APCs) that likely no longer exists and can only be used as unprotected infantry. It is no wonder that they refuse to be sent into a hopeless situation.

The Ukrainian leadership is still sending new units into the Lysichansk cauldron in the east. The Russians do not mind that. Their job is to "demilitarize" Ukraine. To enclose more troops in one swoop makes that easier. [emphasis added] 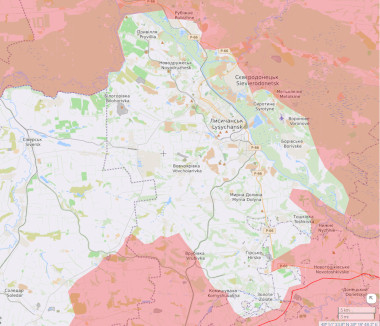 The distance between the red Russian held area at the the top to the one at the bottom at the most narrow gap is a mere 15 kilometer or some 9 miles. There is only one open road running through it from west to east which is used for pushing resupplies to the Ukrainian troops in Lysichansk.

Currently fighting is taking place over Mykolaivka at the bottom of this detail map. Five kilometer north of it is the Lysichansk refinery. It will be the next target. The last road to Lysichansk runs directly north of it. When that road comes under direct Russian fire the cauldron will be closed and the boiling will start for those who are in it. For the ~20,000 soldiers in the cauldron it will mean surrender or die.

If that is still possible it will further lower the morale of other Ukrainian troops.

"We, soldiers of the 8th battalion of the 10th brigade, based near the city of Seversk. We appeal to you, Mr. President, Mr. Zaluzhny, and to the Ukrainian people [...] We demand the immediate rotation of our remaining troops, physically and mentally there are no more forces.
Embedded video 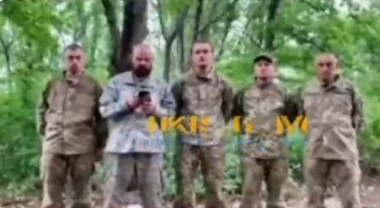 It is interesting that the troops also appeal to General Zaluzhny, the top commander of the Armed Forces of Ukrainian (AFU). It is the first time I hear that [emphasis added]. The idea to fight in Lysichansk until the end came from Zelensky and his civilian advisors. Zaluzhny has reportedly been against that. He wanted those and other troops to retreat and wage a more mobile campaign. That would have shortened the front line and given a chance to create reserves that can rest and prepare for a later counterattack. There are rumors that Zelensky's advisors are now lobbying to replace Zaluzhny as he has increased his media presence. They probably fear a coup. [emphasis added]

The Russian side reported yesterday that it had killed 50 generals and higher officer of the Armed Forces of Ukraine with a missile strike. The group was meeting to plan the further fight in the southern region of Odessa and Kherson. This now seems to have been confirmed:

Russian Armed Forces beat out AFU generals, who were holed up in the rear. The military-civilian administration of Zaporozhye region confirmed results of a missile strike on AFU command post near the village of Shirokaya Dacha, 57 top-level officers were killed.

Last night, probably in response to the strike on the officers, the Ukrainians fired a missile against a gas and oil production platform in the waters near Crimea. The installation was damaged. Russia considers that to be a direct attack on valuable infrastructure within Russian territory and will likely give a strong response.

Yesterday Lithuania announced that it would immediately prohibit Russian goods under EU sanctions to cross from Belarus to the Kaliningrad enclave at the Baltic seas which is Russian territory. That is in breach of several international agreements which guarantee unhindered Russian access to the city. Russia has yet to announce a response to this new provocation.