Tony Kevin [in Pearls and Irritations] says Putin was desperate for something other than this lose-lose outcome for both East and West.

The dramatic declarations on Monday of independence by Donbass city-states Donetsk and Lugansk, and Russia’s accompanying military guarantee to protect them against further heavy artillery attack by Kiev forces, illustrate yet again Barbara Tuchman’s classic March of Folly thesis – how often intelligent governments can act foolishly and against their best interest: in this case, illustrated by Washington and Kiev.

This analysis will be unpalatable to many in the West. It is hard for us to see beyond the all-enveloping narrative that surrounds us of Western good intentions with occasional mistakes in implementation, versus our horror comic negative mental images of Russia’s president, Vladimir Putin.

The latter images are far from the truth but very compelling. The people who create and sustain our mental furniture are top professionals at what they do. They condition our thinking and emotions, through powerful images and memes as well as words. Highly intelligent people hate to admit they have fallen for such propaganda, and often get angry when it is suggested to them that they have.

What Putin Wants From Ukraine

The fact is that there have been many speeches over the years by Putin acknowledging full Ukrainian sovereignty since the 1991 breakup of the former Soviet Union, an authoritarian state in which Ukrainian Communists had played a major leadership role. Putin consistently has asked for two things of Ukraine.

First, decent good-neighborly relations based on mutual respect and mutual security, as between the U.S. and Canada. And second, as in Canada, respect for the full human rights of Ukraine’s numerous “French Canadians” – the 50-percent-plus of Ukrainians who share Russian native language and culture. This importantly includes a right to share in the formation of Ukraine’s national security policies and priorities. But the U.S. has at least since 2013 used Ukraine’s Nazis, and there are plenty of those, as the spearhead of its determination to make Ukraine monocultural, militarized and permanently hostile to Russia.

Just because Putin asserts these things does not mean they are not true. I believe they are true.

Putin, President Emmanuel Macron of France and Chancellor Olaf Scholz of Germany (as with Angela Merkel before him) in recent years and weeks did their best to find pathways through the growing confrontation, but in the end they could not halt the determination of Washington and Kiev foolishly to provoke the Russian bear.

Over months, Putin had warned the West to step backwards from the militarization of Ukraine, and to work with Russia towards a wider European settlement, reversing NATO’s dangerous expansion towards Russia’s borders since 1996. (See my two recent essays on Russian settlement proposals.) 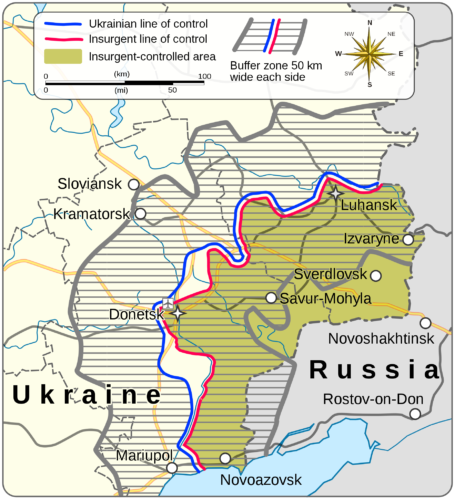 Map of the buffer zone established by the Minsk Protocol II, (12/02/2015) during the War in Donbass. (Goran tek-en, Wikimedia Commons)

As usual, the West cherry-picked, they prevaricated and – the biggest Western blunder of all – Washington’s Joe Biden supplied powerful city-destroying heavy weapons to the ill-disciplined and Nazi-infected Ukrainian army. The temptation to start using them was irresistible.

We saw from Feb. 17 onwards a determined, very threatening, but foolish attempt by Kiev’s armed forces along the line of contact, including the notorious Azov Battalion, to advance into and occupy Donbass, under the noses of the 130,000 Russian troops waiting for orders in nearby Russia.

The Ukrainian government of President Volodymyr Zelensky and his American advisers like Victoria Nuland had convinced themselves that Putin would not now dare to invade Ukraine after all the Western warnings of wider retribution. How wrong they were: right that he would not try to occupy Kiev, but wrong that he would let Donbass fall, creating unacceptable high risks of brutal ethnic cleansing of up to 4 million Russian Ukrainians forced to flee Donbass into Russia. And what a political humiliation this would have been for Putin.

By Feb. 18 it was already clear from Organization for Security and Cooperation in Europe reporting that a sharp escalation in Kiev’s shelling of Donbass was taking place. Donetsk suburbs were being shelled. A Ukrainian special forces commando raid into neighbouring Rostov province in Russia was discovered and neutralized. The Donbass leaders wisely ordered evacuations, not to leave civilian hostages in place in cities at imminent risk of carpet-bombing, if they did not surrender. Aleppo was the stark example of what could have happened.

Now Russia has given the green light to Donbass independence, protected by Russian military might, as was the case in Crimea.

It cannot have been an easy decision for Putin and his National Security Council, urged on by the Duma as they were to do something. Donbass does not have the many strategic and economic attractions and assets of Crimea. Reconstruction will be huge and expensive and the diplomatic costs to Russia very high.

But Putin had no alternative: in the end, he had to defend Russians at grave risk abroad, with real threats to their lives as reported by OSCE and Russian intelligence. The Minsk Accords are now dead. These steps already seem irreversible.

Sooner or later these temporarily independent statelets will merge into Russia. The irony is that France and Germany, the guarantor powers, had for years since 2015 been urging Kiev to accept the federal solutions proposed by the Minsk Accords. But then, Kiev nationalists, quietly backed by NATO, had reneged on Minsk, confident that in the end they could achieve the unitary Ukraine they wanted by letting the Minsk Accords be forgotten. Now, ironically, Kiev pleads in the UNSC for a return to the Minsk Accords. But this train has already left the station. 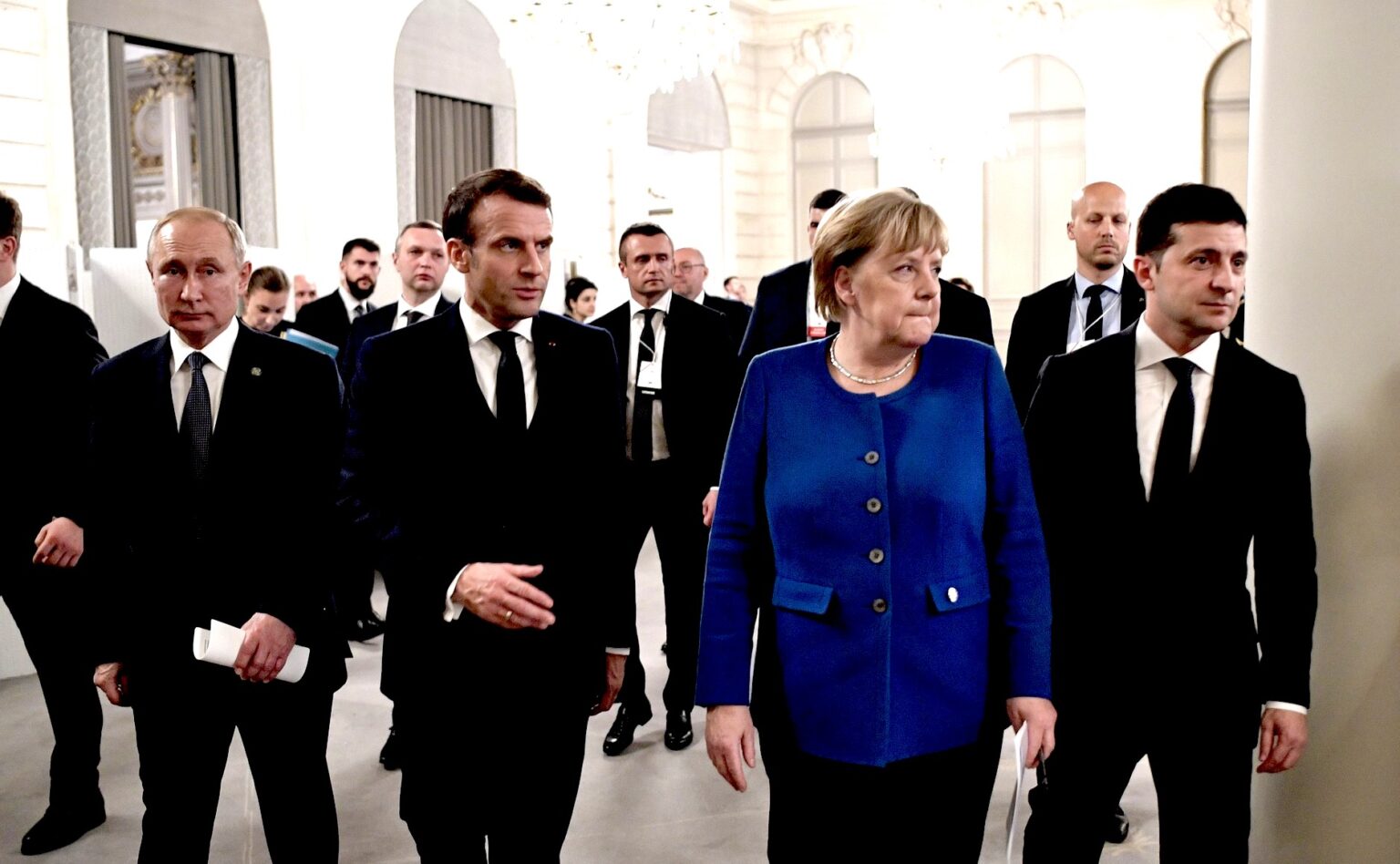 It is hard to see the Nord Stream pipeline opening now, which will be a great economic and humanitarian loss to Europe. There will be greater sanctions intensity, hurting both sides economically, and a huge setback to detente generally. The new Cold War will be more firmly lodged in place.

Will Russia advance further into Ukraine? I would predict almost certainly not, though we will hear Western propaganda for weeks that Russia will do so. The present line of contact will become the frontier, as it has de facto been the frontier since 2015 after former Ukrainian President Petro Poroshenko’s failed attempt to overwhelm Donbass.

How will China and the nonaligned world react? These are the most important questions now. Will they see through this latest Anglo-American false narrative of unprovoked Russian aggression , or will they be fooled yet again by the information warriors ? I would like to think the former, but I fear the sedulous power of the Western false narrative. I believe that China, and more quietly India, will stand by Russia. Others– we shall see.

It did not have to be this lose-lose outcome. A Canadian solution was possible, if there had been a modicum of goodwill from Kiev: a federal Ukrainian state with real sovereignty rights for Russian Ukrainians, including importantly a real say in Ukraine foreign policy choices.

Putin was desperate for this outcome and he waited as long as he could. But Washington and Kiev wanted confrontation and permanent East-West hostility, whipped up by Victoria Nuland and her ilk. They now have this. Ukraine will remain poor, depopulated, illiberal and militarized. It is a tragedy, but the threatened genocide and ethnic cleansing of Donbass Russians would have been intolerable for the majority of Russians. As it was personally, for an obviously angry and distressed Putin. This outcome will bring him and his key advisers no great joy, but it was the right decision to take.

This article is from Pearls and Irritations and is republished with the author’s permission.

Tony Kevin is a former Australian senior diplomat, having served as ambassador to Cambodia and Poland, as well as being posted to Australia’s embassy in Moscow. He is the author of six published books on public policy and international relations.