"Tired of Writing Posts With "No Shit" Or "Duh" Titles"
by Andrei Martyanov
Reminiscence of the Future (June 8, 2022)
https://smoothiex12.blogspot.com/2022/06/i-am-getting-tired-writing-posts-with.html

Or, if you wish with "We told you so" titles. I wrote so much about US "intel" and how it is not really an intel that I don't have time to list all those occasions. But numbers of VSU (Nazi) losses during SMO which begin to circulate now give an impression on the progress of Russian operation in 404. Of course, all this info has a massive geopolitical impact, especially on the United States which, as always, came up with absolute BS narrative which is collapsing really fast.

Well, NYT decided to start steering clear of this whole Russia "lost in Ukraine" BS it promoted together with neocon crazies, and begins this ever familiar tune of the "intel failure". Right.

Hm, how about I put it bluntly--the U.S. never had clear picture on anything, especially on Russia, or, as a private case, SMO and completely bought into Ukie propaganda, which shows a complete incompetence of the "intel" in the US.

Avril D. Haines, the director of national intelligence, testified at a Senate hearing last month that “it was very hard to tell” how much additional aid Ukraine could absorb. She added: “We have, in fact, more insight, probably, on the Russian side than we do on the Ukrainian side.” One key question is what measures Zelenskyy intends to call for in Donbas. Ukraine faces a strategic choice there: withdraw its forces or risk having them encircled by Russia.

Oh no, it is not "hard to tell", any person with a good professional military background and knowledge of Russia would have had no problems whatsoever on forecasting the outcome. But those persons in the US are excluded from media and decision making circles and the US has NO serious strategic intelligence, period. Most what numerous US "think-tanks" produce is shit.

“I’m not sure it’s in the interest of the American public or Ukrainian public to have Ukrainians be upfront about their losses if the result is it strengthens the Russian war effort,” Biddle said. “But that means we don’t really know both sides of the story.” The United States has better estimates of Russian casualties and equipment losses, a senior U.S. official said. The Defense Intelligence Agency, for example, estimates that the number of Ukraine’s soldiers killed in action is similar to Russia’s, but the agency has a far lower level of confidence in its estimate of Ukrainian losses.

No, Mr. Biddle, you don't. You never did, in regards to Russia that is. So this BS posturing about "strategy" is just that, a BS posturing of some "experts" who sense that their BS is about to be called, as usual, and they love their pseudo-academic and "intel" sinecures trying to promote themselves as professionals, which they are not whenever it comes down to real anything: geopolitics, war, economy, what have you. The issue is systemic, it is in the American education system which is completely broken across the board, from K-12 to Ivy League and military academies, and it is really funny listening to "intel" from people who provided "intel" on Saddam's WMD, Iraq and Afghanistan. The closing paragraph says it all.

“Everything is about Russia’s goals and Russia’s prospects for meeting their goals,” Sanner said. “We do not talk about whether Ukraine might be able to defeat them. And to me, I feel that we are setting ourselves up for another intel failure by not talking about that publicly.”

No shit, pardon my French, but there is a serious doubt now in the competence of the whole governing machine in the US, and the practical results of such a governing provide a massive body of evidence to support such an assertion. Especially so in military-intelligence field where the United States moves from one disaster to another. The narrative on SMO, in reality, is dead and the failure is not being set, it already happened. It is a fait accompli no matter how one wants to put a lipstick on the pig. As per US MSM, it is a human and professional sewer, but, evidently, it is the only thing modern US governing is--shitty PR and propaganda. It is also a distillation of a severe butt-hurt and sore-loserism when seeing how real war is conducted by professionals. The number of 51,000 KIA and around 60,000+ of MIA of VSU seem correct (plus-minus) and we are not even talking about sanitary ones which create a grim (for 404) picture of utter rout, as well as a real failure of Western "technology".

Europe could be forced to start rationing energy this winter, starting with industrial uses of natural gas, especially if the winter is cold and China’s economy rebounds, the Executive Director of the International Energy Agency (IEA), Fatih Birol, told the Financial Times in an interview.

What can I say, maybe the West will learn finally the meaning of cause and effect, as well as the meaning of truly good intel, which, when done properly, would have told them that the combined West doesn't even know what it is dealing with. But not in my life time, I guess, if ever.

How can they be "unclear on the Ukrainian war strategy" when they devised it? The Ukrainian army has been trained by NATO (i.e. the US) for the last 8 years and they have been doing what the US tells them.

What they mean is the "strategy" they came up with isn't working and won't work, but they can never admit that.

The great fail of US Intel in this SMO has been US Military and CIA falling for the Russian feint toward Kiev, while believing the fortified triple echelon defenses they engineered for eight years in Donbass would prolong and bleed the Russian forces.

The first actions of the SMO froze Ukie forces to mass in and around Kiev, Chenihiv, Sumy and Kharkiv thinking the Russians would assault one or all of the cities.

Meanwhile, the Russian General Staff went for the symbol of Banderites, Azov's major base, Mariupol. This city the Russians did assault.

All the while, the Ukies lost their mobility and means to maneuver and found themselves incapable of adapting to Russian tactical flexibility. Donbass Ukie forces were trapped within their defenses by Russia's standoff artillery and missiles. The Ukie northern forces in the cities first blocked by Russians stayed in defense of assaults that never came. Subsequently, in the outskirts of Kharkiv, the Ukies have been baited to form several loudly touted counter-attacks which the Russians swiftly trapped and destroyed.

On the western flank of Donbass, large Ukie forces barely join the war. They are held as rescuers-to-be for the Ukies encircled in various cauldrons in Donbass. More recently, some have been sent to 'free Kherson', but each effort has been catastrophically destroyed by Russians.

In all this flow and flux of men and machines, US Intel has been unable to tap into the daily hundreds of terabytes of data flowing from and to the battlefields in dozens of towns, villages and settlements to the General Staff in Moscow. There has been little to show except maybe some intercepts made to target Russian generals leading their forces on the front lines.

As for US Military Intel having any use for the Ukies, it appears the proxies are blind, deaf and dumbed down by US Intel. They have been led to the slaughter, most befittingly.

General Michael Flynn, three-star, complained about the inept CIA Intel fed to JSOC units in Afghanistan and Iraq, and attempted to clean up DIA and CIA failures while he was Defense Intel Agency chief. They later destroyed his career in retaliation when he was named NSC Director for Trump.

A chuckle for you. Do you think Chesty Puller's assessment of the Chinese PLA army back in the 50s was correct? LOL. 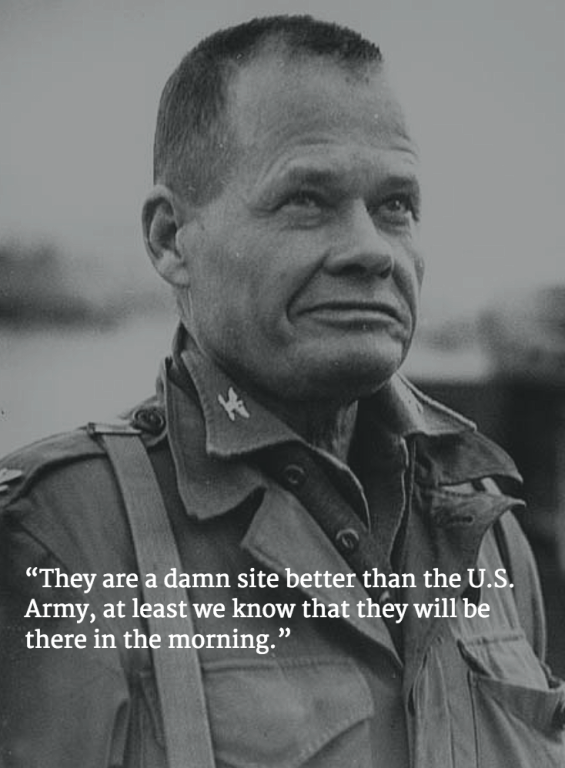 None of the incompetence in the US "intelligence community" surprises me.

Its modus operandi, especially at the higher levels, no longer involves the gathering and evaluation of raw, factual information and subsequent decision making based upon an objective evaluation of same; instead, it involves a Procrustean forcing of the facts into conformity with a policy based upon a preexisting narrative.

To paraphrase Samuel Johnson: "USG intelligence work is like a dog walking on its hind legs. It is not done well, but one is surprised to see it done at all."

Total bs. How can US "intel" not know when the war is between Russia and the full suite of NATO infrastructure, down to the granular level -- ISR, satellites, communications, targeting including counter battery, electronic warfare