Russia Isn’t Dividing Us — Our Leaders Are
A last-ditch effort to derail the Sanders campaign fails as voters finally reject the Russia con
by
Matt Taibbi
Rolling Stone (February 24, 2020)
https://www.rollingstone.com/politics/political-commentary/russia-sanders-campaign-taibbi-957377/ 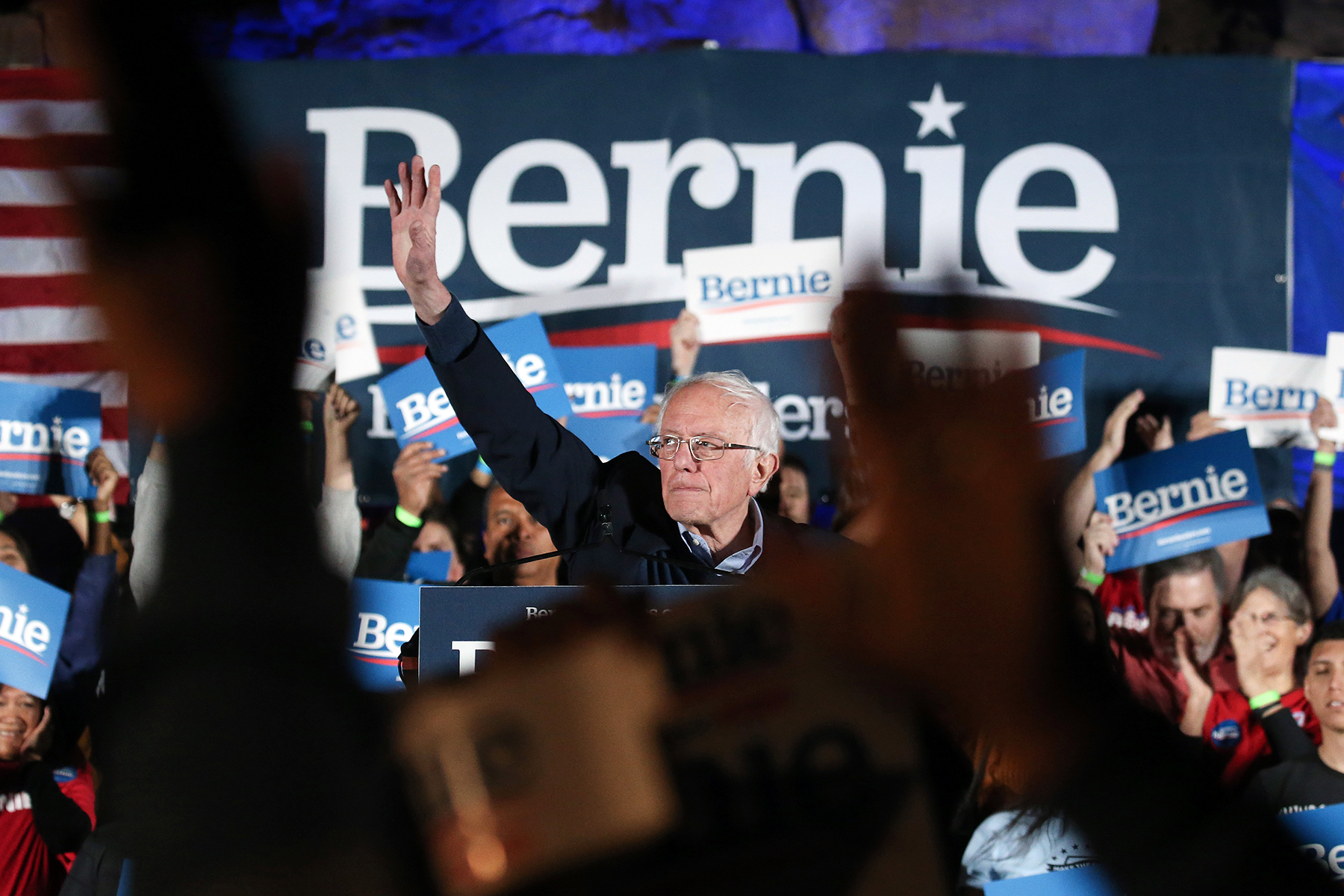 The latest act in the comedy began Friday, just before voting opened in the Nevada Democratic caucus. The Washington Post ran a story — sourced, I’m not joking, to “people familiar with the matter” — explaining that Bernie Sanders had been briefed that “Russia is attempting to help his presidential campaign as part of an effort to interfere with the Democratic contest.”

Sanders was quick to see through the gambit. [??]. “I’ll let you guess about one day before the Nevada caucus,” he said. “Why do you think it came out?” He pointed to a Post reporter: “It was The Washington Post? Good friends.” The Post, after all, has spent years dumping on Sanders, a fervent critic of the paper’s billionaire creep of an owner, Jeff Bezos.

Intelligence officials and pundits have been screeching for years that patriotism demands voters reject the foreign agent Donald Trump and the Russian asset Bernie Sanders, and support a conventional establishment politician. Voters responded by moving toward Trump in national approval surveys and speeding Sanders to the top of the Democratic Party ticket. A more thorough disavowal of official propaganda would be difficult to imagine.

Russiagate will soon be four years old. For the first three years, it pushed parallel themes: that Russia had “interfered” in the 2016 election, and Trump conspired in the fraud.

[note: Yet Bernie Sanders continues to spout the same Russiagate nonsense himself. See his opening response to Mike Bloomberg's red-baiting of him in the South Carolina primary debate.]

The latter theme at times garnered literal around-the-clock coverage. CNN and MSNBC especially (but also the The New York Times, The Washington Post, the Daily Beast, and other major outlets) preached to audiences that the fall of the Trump administration was imminent. Special counsel Robert Mueller, news audiences were told, would reveal the Trump-Russia conspiracy and save the world.

After this story died a violent death when Mueller’s probe ended with no new charges, conventional wisdom shifted to a new gospel: Russiagate was about foreign interference.

Russiagate from the start smelled funny, like bad food. Multiple developments worsened the odor. Stories kept coming up wrong. There were too many unnamed sources, too frequently contradicting one another and/or overstating facts. Every hoof print was a zebra’s. Outlets stopped worrying about relaying unconfirmed rumors, which is how terms like “blackmail,” “Trump,” “Russia” and even “Golden Showers” kept appearing in headlines, without proof there ever had been blackmail.

Moreover, while ordinary citizens like Reality Winner went straight to jail for leaking, senior government officials in the past four years repeatedly and with impunity leaked Russia-related tales. The leaks often pushed still more incorrect narratives, like for instance that that Trump aide Carter Page was a foreign agent.

But the biggest red flag of all was the way in which “Russia” over the past few years became shorthand to describe any brand of political deviance. I wrote this two years ago:

“Since Trump’s election, we’ve been told Putin was all or partly behind the lot of it: the Catalan independence movement, the Sanders campaign, Brexit, Jill Stein’s Green Party run, Black Lives Matter, the resignations of intraparty Trump critics Bob Corker and Jeff Flake . . . ”

Unnamed “officials” have since added the Corbyn movement in England, the gilets jaunes, protesters in Chile, Bolivia, Ecuador, and Colombia, militias in Africa, pro-government disinformation campaigns in Hong Kong, the presidential campaign of Tulsi Gabbard, and countless other undesirables to what has amounted to an ongoing, cumulative blacklist.

The extraordinary thing about this campaign to identify basically the entire universe of political thought outside of establishment Democrats in the U.S. as Russian assets has been the obvious projection involved. The plot running through all of these stories has been the idea that Russia is trying to “undermine our democracy” by “sowing division.” But these charges are coming from the same people who spent the past four years describing Republicans as deplorable fascists, and progressives on the other side as racist, sexist, Nazis, and “digital brownshirts.”

This has resulted in a four-year parade of official cranks muttering about Russian efforts to “divide” us, when their own relentless message has been that America is besieged by a pair of Hitlerian movements on the left and right that must be put down at all costs. The only vision of “unity” they promote is one of obedience to the crackpot anti-utopia of neoliberalism that populations around the world are currently rejecting at the ballot box.

The core of the argument about Russian interference rested upon two major news stories: the hack of the DNC in 2016, and a campaign by the “Internet Research Agency” to push “divisive” social media content.

The former is a leak of true information about the correspondence of senior Democratic Party officials (Jeremy Corbyn was similarly accused of abetting Russian disinformation efforts when damning-but-real materials about the British National Health Service were leaked). The latter? A story about a group of silly memes, amplified a billionfold by the American commercial news reports about these same efforts.

Did the Russians actually do these things? Maybe. It’s not confirmed either way. The sourcing even today remains tied to the same people who’ve lied about a thousand other things, both in the course of this story and before, from WMDs to the missile gap. As we saw this week, when officials quietly began admitting their ideas about “what Russia wants” rested upon perhaps “overstated” interpretations of intelligence, many of these narratives have been elaborate exercises in reading tea leaves. And they won’t let us see the tea leaves.

But if there is an official Russian agency behind, say, the Internet Research Agency, those efforts pale in comparison to the enormous institutional effort in the United States to use the narrative for other ends. The United States, whose spending on intelligence and the military alone nearly equals Russia’s GDP, could crush Russia for breakfast and take the rest of the day off for beer and volleyball. But officials have spent the past few years furiously constructing a popular vision of the Russian enemy far bigger than the actual country, which the likes of Rachel Maddow and Barack Obama not long ago were correctly calling a “gnat on the butt of an elephant.”

Last week was a perfect example. Intelligence officials briefed Sanders about a belief on their part that Russia wanted to “help” his campaign, although the nature of this assistance was not specific enough to be disclosed. The Post noted “U.S. prosecutors found a Russian effort in 2016 to use social media to boost Sanders’ campaign against Hillary Clinton,” a typically deceptive construction.

Prosecutors asserted a Russian effort to boost Sanders rather than finding it as true. Nobody has seen the “proof” of this story, not even the Russians charged by Robert Mueller with the conspiracy to help Sanders. In fact, that evidence was deemed so sensitive that Mueller sought to prevent the Russian defendants from seeing it in discovery. The proof was somehow so dangerous, we had to overturn centuries of legal tradition to keep it hidden. No matter, the press had no problem repeating the story, because why not? The notion that Russians want to help Sanders always fit nicely into establishment propaganda.

As a result, we get situations like last week, where there was an assertion about an unknown level of Russian support — presumably, social media boosting — that could not possibly equal the impact of a single news story leaked to the Post on the eve of the Nevada primary. Every news consumer in America heard that story last week. Russians could only dream of such saturation.

The logic of Russiagate is now beyond absurd. Vladimir Putin, somehow in perfect sync with American voting trends, seeks to elevate both Donald Trump and Bernie Sanders, apparently to compete against himself in the general election, in a desperate effort to suppress the terrifying political might of, say, Joe Biden. I doubt even Neera Tanden in the depths of a wine coma could believe this plot now.

That this is a dumb story is characteristic. The people pushing it don’t have any smart arguments left for remaining in power. Through decades of corporate giveaways, trickle-up economics, pointless wars, and authoritarianism, they’ve failed the entire population. They are the ones directly threatened by any hint that the population is awakening to its decades-long disenfranchisement.

They are also the ones who benefit most from “disinformation.” Who’s trying to divide us? Our own leaders, and as results like the Nevada primary show, the public now knows it.