"More Ukrainian Squirrels for the Desperate West to Chase"
Larry Johnson
A Son of the New American Revolution (May 17, 2022)
https://sonar21.com/more-ukrainian-squirrels-for-the-desperate-west-to-chase/

The surrender of the remaining Ukrainian forces hiding in the bowels of the Avostal steel plant in Mariupol is just another brick in the wall of the sepulcher Russia is constructing for the Ukraine military and the Ukrainian Nazis (don’t forget Putin’s objectives–de-militarize and de-nazify). And what is Ukraine’s response? Pretend this is not happening. Nope, they are pushing the nonsense that this is an orderly withdrawal and a great victory. Looks like Ukraine has taken Baghdad Bob’s course on how to polish a turd (note–you cannot polish feces). In addition, Ukraine embarked on repackaged propaganda memes to try to distract the world’s attention from the havoc Russia is raining down on the Ukrainian army and its weapons depots.

First fake squirrel, an updated “news” report from Task and Purpose recycles an old lie with this headline–Ukraine is now using Russia’s own tanks against them.

As the war in Ukraine enters its fourth month and drags on, Ukrainian forces are getting new equipment in the form of Russian tanks. Mechanics in the city of Kharkiv have been repairing battle-damaged T-72 and T-80 tanks for redeployment. The New York Times first reported on the half dozen mechanics on Friday.

So they are trying to repair old tanks? Boy, there is a game changer. Just one problem–where are the tank crews for these old hulks? Fuel to run them is becoming a problem as well.

Then there is the challenge of deploying these tanks out in the open. The Ukrainians learned a hard lesson in the last few days when they attempted to launch a tank column at Russian positions in the western Donbass. Andrei Martyanov reports:

On May 14 VSU tried to counter-attack in Zaporozhskaya Oblast (in Russian). The result was totally expected: 24 tanks, 12 BMPs and around 100 VSU KIAs.

You can watch the video evidence at Andrei’s site. Just because Ukraine can repair and old tank and try to send it to battle, the tanks are not invisible and Russia’s control of the air and its electronic warfare capability makes a surprise attack very unlikely. Looks like Ukraine has another batch of 24 tanks to repair (that’s assuming there is anything left to fix). The next faux squirrel unleashed on the media world is the claim that a coup is underway to oust Putin, according to American Military News: The head of Ukraine’s military intelligence service said a coup to oust Russian President Vladimir Putin is already underway.

In an interview with Sky News which aired Saturday, Ukrainian Gen. Kyrylo Budanov touted the success of Ukrainian defenses against Russian invasion forces and predicted the war would reach a major turning point by August and be over by the end of the year. Budanov also said Putin is seriously ill with cancer and a coup to oust him from power is already moving forward.

Ukraine cannot endure anymore “successful” defensive stands like Mariupol or Popasnaya. I do not think Ukraine will be in a position to maintain defenses by August. The Ukrainian psyop keeps tossing jello at the media wall hoping something will stick. Is it cancer or Parkinson? Perhaps early Alzheimers. Ukrainian General Budanov is whistling past the flaming crematorium. Indulging a desperate fantasy that does not change the reality on the ground and in the air–Russian troops are methodically eliminating Ukrainian defensive positions in the Donbass and poised to encircle as many as 15,000 Ukrainian fighters in the vicinity of Severodonetsk.

Squirrel number three–Ukraine has seized territory on the Russian border:

Planting a blue and yellow post in the middle of an isolated forest as proof of conquering the Russian border is laughable. If Ukraine hit an actual Russian border crossing defended by Russian border guards I would readily concede that is a bold, credible claim. That has not happened. It is akin to me walking into the nature preserve behind my house (a heavily wooded area that is inconsequential to the safety and security of my community) and declaring it Larryville.

All of these media squirrels are meaningless gestures ginned up by the Ukrainians psyop warriors to divert attention from the disaster at Avostal and the bad news flowing from the Donbass.

One final data point. Russia hit a Ukrainian military base–Desna–46 miles northeast of Kiev with a missile that hit a barrack and left at least 250 Ukrainian soldiers dead: 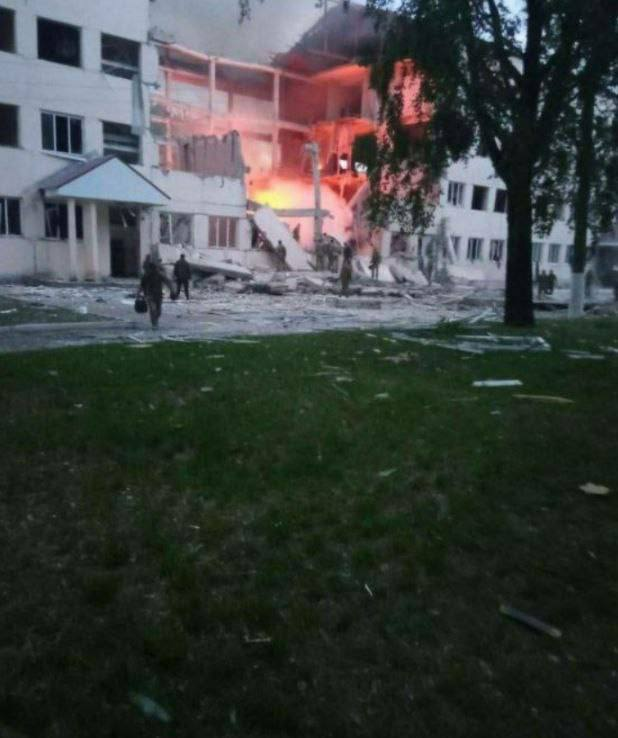 Russia is communicating with explosives, not squirrels.