"Ideological unity was the US Republicans’ only strength. But with Liz Cheney out, even that’s falling apart "
Bradley Blankenship, RT.com (May 13, 2021)
https://www.rt.com/op-ed/523744-us-republicans-liz-cheney/ 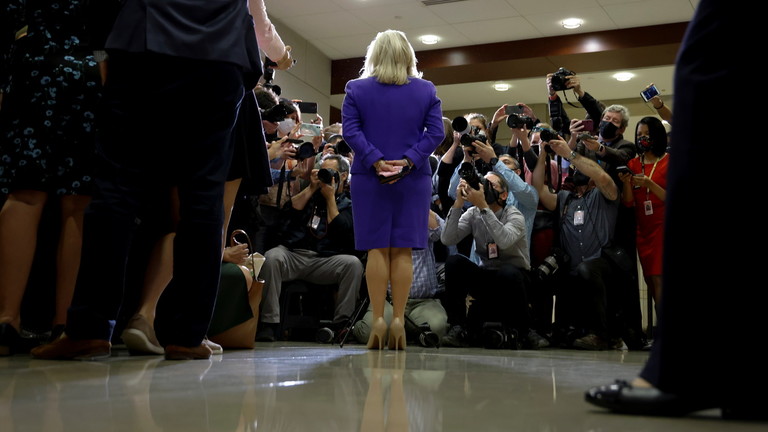 FILE PHOTO: US Representative Liz Cheney (R-WY) speaks to reporters after her removal as chair of the House Republican Conference on Capitol Hill in Washington, US, May 12, 2021 © REUTERS/Jonathan Ernst

The ouster of Republican congresswoman Liz Cheney from party leadership lays bare the GOP’s problem: they lack workable policies, and their only strength – unity – has now been shattered, too.

Cheney, an up-and-coming GOP superstar and daughter of former vice president Dick Cheney, was purged from her leadership role in the Republican Party on Wednesday. Her crime? Refusing to walk in lockstep with her Donald Trump-supporting House colleagues over the Capitol riot on January 6.

The move had been anticipated ever since she and a few other Republican members of Congress voted to impeach the former president, which would have effectively barred him from running for office again. State parties across the country were booting out members who sided against Trump – who, most other members, particularly in the House of Representatives, still fully support.

Yet this is an important moment for US politics. Cheney’s ouster, coupled with news this week that former Republican officials plan to create a third party if theirs doesn’t break from Trump, shows that the American conservative movement is facing an existential crisis. That’s because the GOP’s strength has always come squarely from its ideological unity.

Though it might appear to be a blob of loosely connected single-issue voters who care about guns, abortion, or some other hotspot culture issue, a fiscal conservative message has always been its underlying current. Even if voters feel strongly about just a single issue, fiscal conservatism – which they loosely define as being a derivative of “liberty” and “freedom” – is seen as the baseline position. It has been impossible to question it.

Cultural issues have long been a Trojan horse for economic policies that favor wealth and privilege. This is why the GOP’s answer to any policy question is to cut taxes for the rich, defund welfare programs, shrink government and blame the individual for some perceived moral failing. It plays right into the country’s Protestant ethic, which is that hard work, if framed properly, is a sign of grace and salvation.

Though it has widespread appeal, thanks in no small part to the droves of corporate cash that funds the GOP ideological complex, it’s been a disaster, in practice, for the majority of Americans. Not only that, but it’s an ideology fundamentally rooted in nothing. And it’s so reactionary that, when it actually achieves the power it strives for, it can’t do anything. Trump’s government was a case in point.

Yes, until this year, the previous paradigm was dominated by the politics of former GOP president Ronald Reagan. Yes, Republicans succeeded in elections all over the country. Yes, they have been masterful at political organization. And, yes, they have enacted their policy exactly as they wanted. But people’s lives got worse and, behind the scenes, culture slipped away from the conservative movement.

Music, film, literature, comedy, and even newer domains such as social media are dominated by liberals and progressives. And religiosity in America is waning, especially among younger people, due to its association with the political right. Why? Because conservatism in America is brain dead. I do admit some bias in saying this, but there is legitimately no serious debate, no advancement of novel ideas or any leadership capability of any kind coming from that quarter.

For example, on Tuesday, while Amy Klobuchar was calling out Senator Ted Cruz, for his role in perpetuating the lies that led to the Capitol riot on January 6, he was not only ignoring her, but scrolling through his Twitter feed. Which he bragged about. On Twitter.

And then there are the more extreme examples, such as small-town GOP Texas Mayor Tim Boyd, who said on Facebook during the Texas cold snap, “No one owes you or your family anything, nor is it the local government’s responsibility to support you during trying times like this! Sink or swim, it’s your choice!”

Cruz, whose home state is also Texas, jetted off to Cancun at about the time some of his constituents were literally freezing to death and then blamed his two pre-teen daughters – even though texts were leaked showing a different story – when the public became aware of the trip. And then he even joked about it at the Conservative Political Action Conference.

These are politicians who run for office to do nothing and blame individuals for what are ostensibly societal issues. In the case of better-known lawmakers such as Cruz, they’ve essentially become professional trolls who have remarkable ambition, coupled with extremely unremarkable attitude.

Although the GOP can’t govern, it has continued to dominate elections – that is, until now. Trump became a one-term president and the Republicans lost both the House and the Senate. With the continued fracturing of the Republican Party, I think it’s clear this will become an even broader trend, but it’s the 2022 midterm elections that will prove to be the ultimate test.