"By failing to withdraw ALL forces from Afghanistan,
Trump has killed the Afghan peace plan"
by Scott Ritter
RT.com (November 18, 2020)
https://www.rt.com/op-ed/507122-afghanistan-withdraw-troops-peace-taliban/ 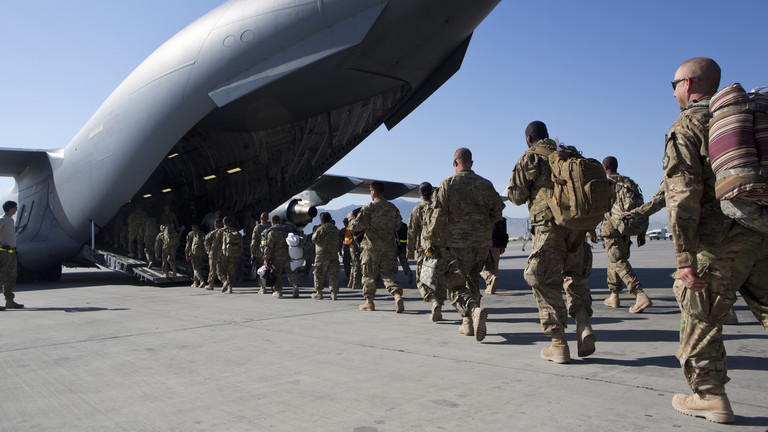 The US-Taliban peace plan has always been just a political cover for Trump to withdraw troops from Afghanistan. By failing to do so before he leaves office, he’s guaranteed that the US will remain in Afghanistan for years to come.

In a statement made to reporters, acting Secretary of Defense Christopher Miller announced that President Donald Trump has ordered that the number of US forces in Afghanistan be sharply reduced from 4,500 to 2,500 by January 15, 2021. Miller also noted that US forces in Iraq would be reduced from the current level of 3,000 to 2,500 during the same timeframe.

Miller made no mention of US troop levels in Syria, which are officially said to number some 200 soldiers.

Recent revelations from James Jeffrey, the US Special Representative for Syria Engagement, indicate that the US military has misled the President about the actual US force level inside Syria, which is said to number around 900. The additional 700 troops are most likely drawn from US forces in Iraq. The extent to which the withdrawal of 500 troops from Iraq would impact the Syrian numbers game is not known at this time.

The announced troop reductions stopped short of a threatened full withdrawal from Afghanistan made by Trump in October. “We should have the small remaining number of our BRAVE Men and Women serving in Afghanistan home by Christmas!” he tweeted, a reflection of President Trump’s desire to fulfill a long-standing pledge to bring all the troops home from what has become the longest war in American history. His failure to do so stems not from a lack of personal will on the part of the President, but rather the reality behind the logistical and political complexities involved in disentangling the US from a region it has been engaged in for nearly 20 years.

We should have the small remaining number of our BRAVE Men and Women serving in Afghanistan home by Christmas!
— Donald J. Trump (@realDonaldTrump) October 7, 2020

Under the terms of the peace agreement between the US and the Taliban, the complete withdrawal of US forces from Afghanistan was scheduled to be completed by May 2021. This timeline has long been controversial, contingent as it was upon conditions such as commitments on the part of the Taliban to sever relations with Al Qaeda and actively fight Islamic State (IS, formerly ISIS/ISIL), as well as for meaningful progress in intra-Afghan talks regarding the formation of a new governing coalition. Critics of the peace plan believe that the Taliban have not fulfilled these commitments, and that a precipitous withdrawal of US forces conducted void of these conditions would undermine the ongoing peace talks and threaten the security of Afghan government forces.

Senate Majority Leader Mitch McConnell condemned the announced troop drawdown as something which “would hurt our allies and delight the people who wish us harm,” including Russia and Iran. The Kentucky Republican warned that a “humiliating” pullout from Afghanistan would be worse than President Barack Obama’s 2011 withdrawal from Iraq and more akin to the American departure from Saigon in 1975, immediately prior to that city falling to advancing North Vietnamese forces.

When Trump first ordered US force levels reduced from around 8,600 to their current level, General Frank McKenzie, the head of US Central Command, noted that “At 4,500 we’re still going to be able to accomplish the core tasks that we want to accomplish.” Dropping the level of troops down to 2,500 means that the “core tasks” McKenzie spoke of, focused on containing and eliminating a residual Al Qaeda and burgeoning Islamic State presence in Afghanistan, cannot be accomplished.

Therein lies the rub. Joe Biden, who has declared victory in the presidential election, has made it clear that, while ideally “these ‘forever wars’ have to end,” he would not support a total withdrawal of US forces from Afghanistan under any circumstances, instead supporting a presence of up to 2,000 special-operations forces throughout the region to continue combat operations against Al Qaeda, Islamic State and other terror threats. Biden has bi-partisan support for this position, with Representative Michael McCaul, the Republican leader on the House Foreign Affairs Committee, declaring that the US needs “to ensure a residual force is maintained for the foreseeable future to protect US national and homeland security interests and to help secure peace for Afghanistan.”

While the Trump drawdown to 2,500 approaches the force level Biden said he would be comfortable with, that number is predicated on two conditions which are, for the moment, unmet.

First is the fact that a 2,000-strong special operations force structure is predicated on the US and its Afghan partners having largely eliminated the Al Qaeda and Islamic State presence in Afghanistan; this benchmark remains a work in progress. This force structure is also conditioned on the Taliban demonstrating a willingness to actively confront both Al Qaeda and Islamic State, a posture many critics believe the Taliban is incapable of, despite their assurances otherwise.

Even if the forces of Islamic extremism could be defeated by the US and contained by the Taliban, the reality is that the Taliban will not agree to any final peace settlement which allows for a continued military presence on Afghan soil. The Trump peace plan had all US forces leaving Afghanistan by May 2021, a timetable which appeared to be written in stone regardless of the reality on the ground inside Afghanistan. But Trump was not re-elected; Joe Biden will be the US President come May 2021, and there is virtually no chance that the timeline agreed to between Trump and the Taliban will be adhered to. [emphasis added]

Indeed, the incoming Biden administration will, almost immediately after assuming power on January 20, 2021, be pressured by the Pentagon to reinforce US forces in Afghanistan (i.e., halt the drawdown and actually dispatch thousands of new troops to the region), a move that would put the ongoing peace process at risk. This act of self-sabotage would play well with the many critics of the US-Taliban peace agreement, who believe that the deal was little more than political cover for Trump’s desire to get out of Afghanistan, and not reflective of “genuine” US and regional security concerns. Joe Biden may claim that he is desirous of an end to the “forever war” in Afghanistan, but unless he adheres to the Trump plan of complete withdrawal by May 2021, the US will be fighting not only an angered Taliban, but also a resurgent Al Qaeda and Islamic State, for years to come.