Biden’s bailout will not alter the structural inequities and other fundamental underpinnings of America’s death spiral.

The established ruling elites know there is a crisis. They agreed, at least temporarily, to throw money at it [emphasis added] with the $1.9 trillion Covid-19 bill known as American Rescue Plan (ARP).

But the ARP will not alter the structural inequities, either by raising the minimum wage to $15 an hour or imposing taxes and regulations on corporations or the billionaire class that saw its wealth increase by a staggering $1.1 trillion since the start of the pandemic [emphasis added].

The health system will remain privatized, meaning the insurance and pharmaceutical corporations will reap a windfall of tens of billions of dollars with the ARP, and this when they are already making record profits. The endless wars in the Middle East, and the bloated military budget that funds them, will remain sacrosanct. Wall Street and the predatory global speculators that profit from the massive levels of debt peonage imposed on an underpaid working class and loot the U.S. Treasury in our casino capitalism will continue to funnel money upwards into the hands of a tiny, oligarchic cabal.

There will be no campaign finance reform to end our system of legalized bribery [emphasis added]. The giant tech monopolies will remain intact. The fossil fuel companies will continue to ravage the ecosystem. The militarized police, censorship imposed by digital media platforms, vast prison system, harsher and harsher laws aimed at curbing domestic terrorism and dissent and wholesale government surveillance will be, as they were before, the primary instruments of state control.

This act will, at best, provide a momentary respite from the country’s death spiral [emphasis added], sending out one-time checks of $1,400 to 280 million Americans, extending $300 weekly unemployment benefits until the end of August and distributing $3,600 through a tax credit for children under the age of 6 and $3,000 per child ages 6 to 17 starting on July 1.

Much of this money will be instantly gobbled up by landlords, lenders, medical providers and credit card companies. The act does, to its credit, bail out some 1 million unionized workers poised to lose their pensions and hands $31.2 billion in aid to Native communities, some of the poorest in the nation.

But what happens to the majority of Americans who get government support for only a few months? What are they supposed to do when the checks stop arriving at the end of the year? Will the federal government orchestrate another massive relief package? I doubt it. We will be back where we started. 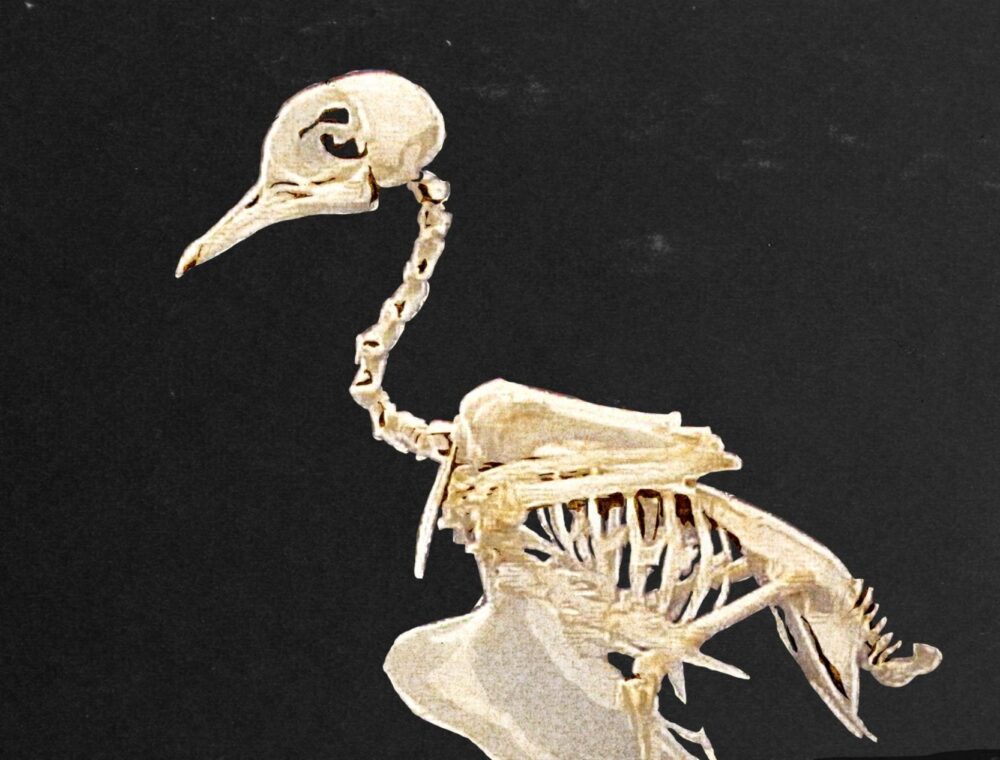 By refusing to address the root causes of America’s rot, by failing to pump life back into the democratic institutions that once gave the citizen a voice, however limited, and make incremental and piecemeal reform possible, by not addressing the severe economic and social inequality and dislocation that afflicts at least half the country, the anomie and ruptured social bonds that gave rise to a demagogue like Donald Trump will expand. The American empire will not staunch its disintegration. The political deformities will metastasize [emphasis added].

When the next demagogue appears, and the Republican Party has banked its future on Trump or his doppelgänger, he or she will probably be competent. The Republican Party in 43 states has proposed 250 laws to limit mail, early in-person and Election Day voting and mandate stricter ID requirements, as well as reduce the hours at voting sites and the numbers of voting locations potentially disenfranchising tens of millions of voters. The party has no intention of playing by the rules. Once back in power, cloaked in the ideological garb of Christian fascism, the new or the old Trump will abolish what little is left of democratic space [emphasis added].

The established elites pretend that Trump was a freakish anomaly. They naively believe they can make Trump and his most vociferous supporters disappear by banishing them from social media. The ancien régime, will, they assert, return with the decorum of its imperial presidency, respect for procedural norms, elaborately choreographed elections and fealty to neoliberal and imperial policies.

But what the established ruling elites have yet to grasp, despite the narrow electoral victory Joe Biden had over Trump and the storming of the capital on Jan. 6 by an enraged mob, is that the credibility of the old order is dead. The Trump era, if not Trump himself, is the future. The ruling elites, embodied by Biden and the Democratic Party and the polite wing of the Republican Party represented by Jeb Bush and Mitt Romney, is headed for the dustbin of history [emphasis added].

The elites collectively sold out the American public to corporate power. They did this by lying to the public about the consequences of the North American Free Trade Agreement (NAFTA), trade deals, dismantling welfare, revoking Glass-Stegall, imposing austerity measures, deregulating Wall Street, passing draconian crime bills, launching endless wars in the Middle East and bailing out the big banks and financial firms rather than the victims of their fraud. These lies were far, far more damaging to the public than any of the lies told by Trump. These elites have been found out. They are hated. They deserve to be hated [emphasis added]. 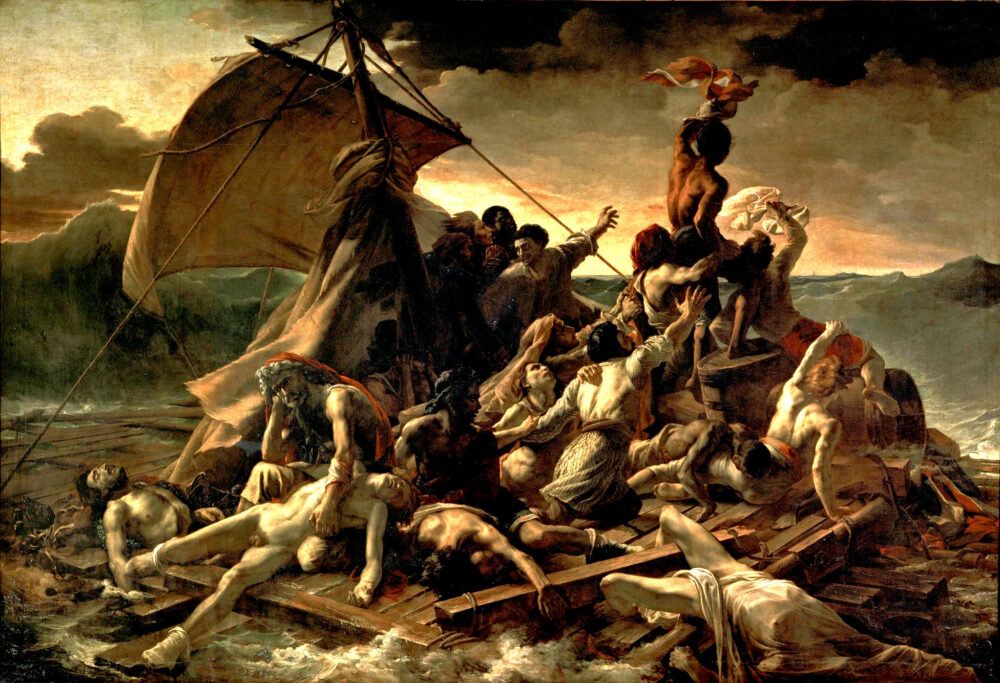 “The Rise of Medusa” by Théodore Géricault, 1818-1819, the Louvre. The work is set at a moment when “the ruin of the raft may be said to be complete.” (Wikimedia Commons)

The Biden administration — and Biden was one of the principal architects of the policies that fleeced the working class and made war on the poor — is nothing more than a brief coda in the decline and fall, set against which is China’s rising global economic and military clout [emphasis added].

The loss of credibility has left the media, which serves as courtiers to the elites, largely powerless to manipulate public perceptions and public opinion. Rather, the media has divided the public into competing demographics [emphasis added]. Media platforms target one demographic, feeding its opinions and proclivities back to it, while shrilly demonizing the demographic on the other side of the political divide. This has proved commercially successful. But it has also split the country into irreconcilable warring factions that can no longer communicate. Truth and verifiable fact have been sacrificed. Russiagate is as absurd as the belief that the presidential election was stolen from Trump. Pick your fantasy.

The loss of credibility among the ruling elites has transferred political influence to those outside established centers of power such as Alex Jones, celebrities and those, such as Joe Rogan, Glenn Greenwald and Matt Taibbi who were never groomed by the media conglomerates.

The Democratic Party, in an effort to curb the influence of the new centers of power, has allied itself with social media industry giants such as Twitter, YouTube, Facebook, Patreon, Substack and Spotify to curtail or censor its critics. The goal is to herd the public back to Democratic Party allied news organizations such as The New York Times, The Washington Post and CNN. But these media outlets, which in the service to corporate advertisers have rendered the lives of the working class and the poor invisible, are as reviled as the ruling elites themselves [emphasis added].

The loss of credibility has also given rise to new, often spontaneous groups, as well as the lunatic fringe that embraces conspiracy theories such as QAnon. None of these groups or individuals, whether they are on the left or the right, however, has the organizational structure, coherence and ideological cohesiveness of radical movements of the past, including the old Communist Party or militant labor unions [emphasis added]. 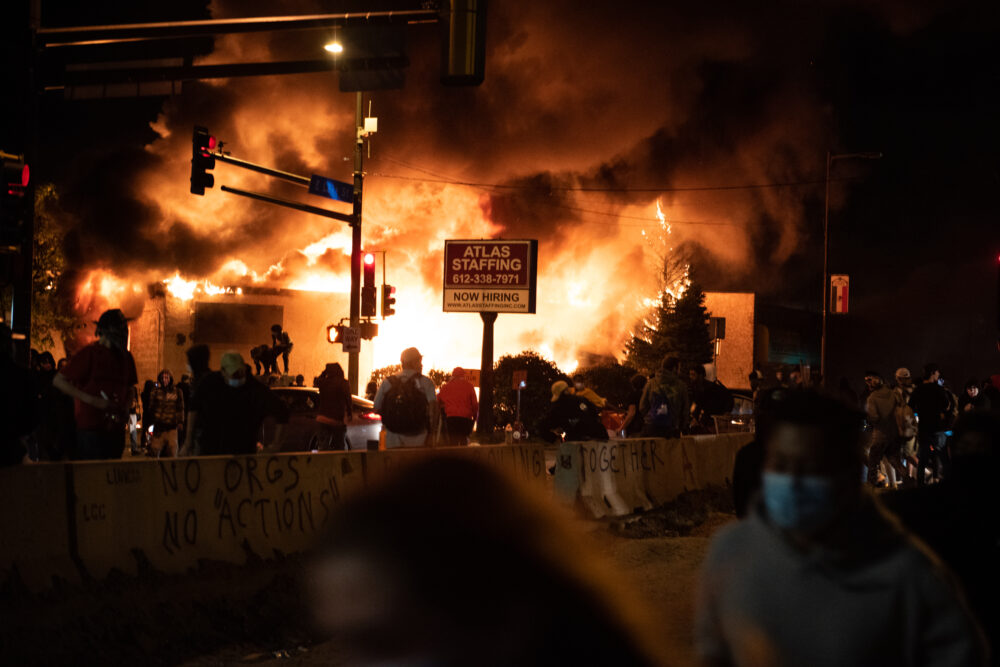 They traffic in emotional outrage, often replacing one outrage with another. They provide new forms of identity to replace the identities lost by tens of millions of Americans who have been cast aside. This energy can be harnessed for laudable causes, such as ending police abuse, but it is too often ephemeral. It has a tendency to transform political debate into grievance protests, at best, and more often televised spectacle.

These flash mobs pose no threat to the elites unless they build disciplined organization structures, which takes years, and articulate a vision of what can come next [emphasis added]. (This is why I support Extinction Rebellion, which has a large grassroots network, especially in Europe, carries out effective sustained acts of civil disobedience and has a clearly stated goal of overthrowing the ruling elites and building a new governing system through people’s committees and sortition.)

This amorphous, emotionally driven anti-politics is fertile ground for demagogues, who have no political consistency but cater exclusively to the zeitgeist of the moment [emphasis added]. Many of those who support demagogues know, on some level, they are con artists and liars. But demagogues are revered because, like all cult leaders, they flout conventions, are outrageous and crude, claim omnipotence and disdain traditional decorum. Demagogues are weaponized against bankrupt well-heeled elites who have stripped the public of opportunities and identities, extinguishing hopes for the future. A cornered population has little left but hate and the emotional catharsis expressing it brings.

The engine of our emerging dystopia is income inequality, which is growing. This bill does nothing to address this cancer. The bottom 50 percent of households in 2019 accounted for only 1 percent of the nation’s total wealth. The top 10 percent accounted for 76 percent. And this was before the pandemic accelerated income disparity.

Only deep structural reforms accompanied by New Deal-type legislation can save us, but such changes are an anathema to the corporate state and the Biden administration. History has amply demonstrated what happens when income disparities of this magnitude afflict a country. We will be no exception. Lacking a strong left, the United States will in desperation embrace authoritarianism, if not proto-fascism. This will, I fear, be Biden and the Democratic Party’s real legacy. [emphasis added]