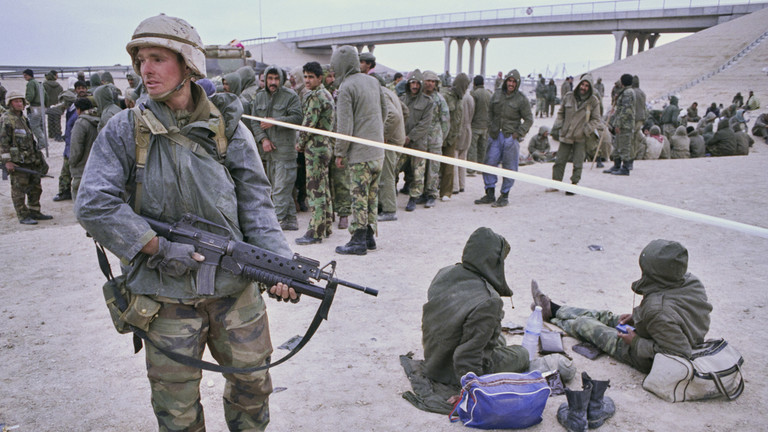 The Pentagon is in the process of preparing options for President Joe Biden regarding the deployment of US forces into NATO’s eastern flank to seek to deter Russia from acting against Ukraine, or threatening NATO’s easternmost members of Poland, Latvia, Estonia, and Lithuania.

Some 8,500 US troops have been put on standby to be prepared to deploy to Europe on short notice. These are the US contingent of the NATO Response Force, a multinational, 40,000-troop unit tasked with responding to aggression against member countries.

If the US wanted to do more, it could deploy a few squadrons of US Air Force fighters, along with another heavy armored brigade, whose equipment is prepositioned in Poland, and some support troops. It could also send 3,000 troops from the 82nd Airborne Division, which is tasked to “respond to crisis contingencies anywhere in the world within 18 hours.”

All these troops, however, even if assembled in aggregate, could not stand up to a potential Russian adversary, for the simple fact that none of these forces have trained to fight a modern combined arms conflict against a peer-level opponent. Putting troops and equipment on a battlefield is the easy part; having them perform to standard is harder, and having them execute doctrine that is no longer in vogue is impossible.

Joe Biden might think he’s flexing hard with this talk of military power projection. All he is doing, however, is further underscoring the absolute dismal state of combat readiness that the US military finds itself in after 20 years of low-intensity conflict in a losing cause.

The time to have deployed 50,000 troops to Europe was in 2008, after the Russian-Georgian War, or 2014, after the Crimea crisis. Having 50,000 well-armed US troops refocused on the difficult task of fighting a sustained ground conflict in Europe might have forced Russia to reconsider its options. By considering this option now, all Biden is doing is proving the point that the US is a failing superpower, and NATO is lacking both purpose and drive.

A shadow of its former self

What a difference three decades makes. In 1990, the US Army in Europe (USAREUR) consisted of some 213,000 combat-ready forces organized into two Corps – V and VII – a Berlin Brigade, and the 3d Brigade of the 2d Armored Division, deployed in northern Germany to protect the port of Hamburg. Each corps consisted of one infantry division, one armored division, and an armored cavalry regiment.

Through a program known as Return of Forces to Germany (REFORGER), USAREUR could be reinforced within 10 days by another three mechanized infantry divisions (one of them Canadien) and two armored brigades which would fill out V and VII Corps to full strength, as well as a third corps (III Corps) consisting of two armored divisions, a mechanized infantry division, a cavalry regiment, and other corps-level troops.

These forces would fall in on prepositioned military stores warehoused and maintained to a level of constant readiness. Between the forces in Europe and those earmarked for deployment, USAREUR boasted a total combat capacity of over 550,000 troops which helped maintain the peace during America’s long Cold War with the Soviet Union, which had around 600,000 troops stationed in eastern Europe, including 338,000 in East Germany alone.

The potency of US forces back then went on display in the war to liberate Kuwait from Saddam Hussein’s soldiers in 1991. USAREUR deployed a Corps Headquarters (the VII) along with 75,000 personnel, 1,200 tanks, 1,700 armored combat vehicles, more than 650 pieces of artillery, and more than 325 aircraft to the Persian Gulf to support Operation Desert Shield/Desert Storm. A decade of intense combined arms warfare training in support of a new Air-Land Battle doctrine made the USAREUR forces the most combat capable units in the operation, helping crush the world’s fourth largest army in a 100-hour ground combat operation that is unmatched in modern times.

After preserving the peace in Europe and winning a war in the Middle East, USAREUR was rewarded by being unceremoniously tossed into the trash bin of history. In 1992, after the collapse of the Soviet Union, some 70,000 soldiers redeployed to the continental United States, part of a withdrawal that saw USAREUR shrink to some 122,000 troops by the end of that year; 12 months later, it was down to some 62,000 soldiers. The Cold War, we were told, was over, and there was no longer a need to shoulder the expense of maintaining a standing force in readiness because, with the dissolution of the Warsaw Pact and the Soviet Union, there would never again be a large-scale ground war in Europe.

By 2008, the last remaining Corps-sized headquarters in USAREUR, V Corps, was rated as the least valuable military asset in the entire US military in terms of power projection capabilities.

The US wasn’t the only NATO power looking to cut costs in the post-Cold War era. In 1988 – a year before the fall of the Berlin Wall – the West German Army was looking at a reorganization scheme that would retain its structure of 12 divisions with 48 brigades, but reduce the manning levels from 95% to a ‘cadre structure’ of only 50%-70% that could be brought to full strength only through the mobilization of reserves.

By 2020, the German Army, by now representing a unified country, had been reduced to little more than 60,000 troops organized into two armored divisions of six brigades, and one rapid deployment division of two brigades. But even this reduced figure is misleading – to deploy a combat-capable battalion-sized armored force to the Baltics as part of NATO’s ‘battlegroup’ concept, Germany has to cannibalize its existing armor force. Germany today is incapable of rapidly deploying a single armored brigade from its barracks.

In 1988 the British Army of the Rhine (BAOR, representing the United Kingdom’s NATO contingent in Europe) consisted of some 55,000 troops organized into a single armored corps consisting of three armored divisions with eight brigades and supporting units. By 2021, this had dropped to just 72,500 troops in the entire British military, with no troops in mainland Europe. Moreover, the British are only capable of fielding two armored brigades, only one of which is capable of projecting power in any meaningful capacity onto European soil in short notice.

Every other military in NATO has undergone similar reductions. Along with the drawdown in size came a similar reduction in training, both in terms of scale and scope. Whereas REFORGER used to prepare soldiers to fight multi-division sized engagements using doctrine geared toward the employment of combined arms operations, today NATO carries out battalion- and brigade-sized training which focuses on low-intensity conflict and “operations other than war” (i.e., peacekeeping, disaster response, etc.).

NATO today cannot fight a corps-sized engagement, even if it had a functioning corps-sized unit fit for training. The fact of the matter is that NATO is a mere shadow of its former self, militarily neutered, and incapable of projecting power in any meaningful capacity.

Of course, NATO wasn’t the only European military organization to undergo reduction and restructuring. With the dissolution of the Soviet Union in 1991, the Russian military was in total disarray. In 1988, the Soviet military comprised some 5.5 million personnel; by 1998, this number had dropped to around 1.5 million. Once configured to defeat NATO and occupy western Europe, by 1998 the Russian army was not able to conduct medium- or large-scale military exercises. It had performed poorly in combat in Chechnya and had fumbled its internal reorganization so badly that its ability to project power was virtually nil.

By 2000, things started to turn around. President Vladimir Putin had brought a semblance of purpose and discipline to Russian military service. Putin was motivated in part by the eastward expansion of NATO, which, despite the promise made to former Soviet President Mikhail Gorbachev that NATO troops would not move “one inch” eastward in the case of German reunification, had assumed into its ranks not only former Warsaw Pact nations, but also former Soviet Republics.

The Russian Army defeated a Chechen insurgency in the Second Chechen War (something the US military and NATO were unable to accomplish in 20 years in Afghanistan) and performed well in both the Georgian-Russian War of 2008 and the Crimea operation in 2014. Moreover, largely in response to the eastward expansion of NATO, Russia reformed two Cold War-era military formations – the 1st Guards Tank Army and the 20th Combined Arms Army – which specialized in the very kind of mobile, large-scale combined arms operations the US military and NATO have forgotten how to fight.

Flexing its way out of a fight

Without projecting Russian intent, the reality is that the Russian military buildup in its western and southern military districts, when combined with the deployment of mobile forces in Belarus, represent a military power projection capability that is not only more than capable of defeating Ukraine, but also NATO forces currently deployed on its eastern flank. The chances of such an all-out conventional-style war may be extremely slim, but there is no doubting who holds the advantage here.

After years of behaving like a teenager shadow boxing in the basement of his mother’s house, playing out the fantasy of knocking out Ivan Drago in the 1985 movie Rocky IV, the US and NATO find themselves confronting the reality of the situation they themselves created. Having picked a fight with Russia in the belief that it was not strong enough to pick up the gauntlet, the trans-Atlantic alliance is now confronted with the reality that Ivan Drago is alive and well and standing in the ring, ready to do battle.

On screen, Rocky IV was an entertaining movie with (if you’re an American) a satisfying ending. In the modern-day remake being contemplated by Joe Biden and NATO, Rocky Balboa is little more than a figure in their collective imagination. Rather than step into the ring and meet the challenge, all the US and NATO can do is continue to flex, hoping that somehow Russia will be taken in by the bluff and a pretense of power that simply no longer exists.