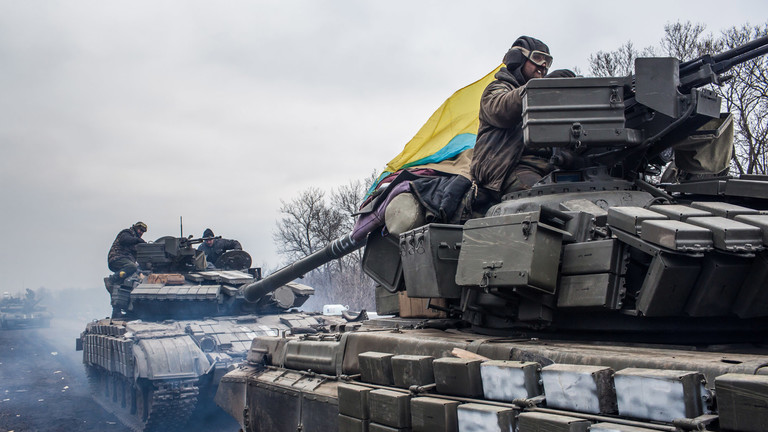 Russia and the West have sounded the alarm in past weeks over a standoff across the border with Ukraine. Both sides accuse each other of inflaming the situation, and it's increasingly clear they see the conflict very differently.

A recent poll by Moscow’s Levada Center, registered as a ‘foreign agent’ by Moscow’s Ministry of Justice over ties to overseas funding, reveals who Russians blame for the escalation of the situation. A colossal 50% believe NATO is responsible, while only 16% blame Ukraine and 3% point the finger at the war-torn Donbass region. Another 4% believe that Russia is the culprit. Simply put, those inside the country consider the conflict over Ukraine to be a NATO war.

Ukraine not to blame?

Why do only one in six Russians blame Kiev, given how often the media paints this as a battle between the two nations? The position appears consistent with the fact Moscow has stated that negotiating with Ukraine makes little sense as its leadership is under Washington’s control.

One poll from Ukraine reveals that 65% of Ukrainians believe that their country is under foreign control, and in the more NATO-critical eastern and southern regions of Ukraine this number stands at 75% and 71%. These numbers should not surprise anyone following the facts:

NATO promised membership to Ukraine when only approximately 20% of Ukrainians said they wanted to join the bloc. After backing the toppling of Ukraine’s democratically elected president, Western countries then supported Kiev’s ‘anti-terrorist operations’ against its own population who contested the legitimacy of the coup. The US has since supported the draconian suppression of political opposition in the country, which included arresting the main opposition leader, shutting down opposition news media, disenfranchising millions of voters, arresting protests, and using anti-corruption agencies to purge opposition. The objective of making Ukraine a bastion against Russia is not compatible with supporting Ukrainian democracy.

President Volodymyr Zelensky won a landslide victory with 73% of the popular vote in 2019 on the platform that he would negotiate with Donbass and restore relations with Russia. Appeasing right-wing nationalists at home, as well as Washington, Zelensky reversed his election promises and his approval ratings have collapsed. By October 2021, a poll from the Kyiv International Institute of Sociology revealed that his approval had collapsed to a mere 24%. When Zelensky’s deputy chief of staff, Oleg Tatarov, complained about the foreign control over the government, he was immediately suspended and indicted.

The US has been reluctant to push its Ukrainian proxy to implement the UN-approved Minsk Agreement, and instead, the US pumps weapons into Ukraine and routinely threatens NATO expansion. Making Ukraine a front line against Russia compels Moscow to respond, which risks war and the survival of Ukraine as a state.

Subsequently, most Russians seem not to blame Ukraine, writing off the country as under external administration.

During the Cold War, NATO served the purpose of containing the Soviet Union with collective defence. The bloc aimed to preserve the status quo against Soviet revisionism. After the Warsaw Pact was dissolved and the Soviet Union collapsed, many expected NATO to be dismantled as well. It did the opposite by transforming from a status-quo to a revisionist military alliance. On March 12, 1999, NATO began to expand and less than two weeks later invaded Yugoslavia in violation of international law. As Henry Kissinger cautioned at the time, NATO could no longer claim to be a defensive alliance and Russia’s fears about Western revisionism in Europe had been confirmed.

The central principle of “indivisible security”, suggesting that one side should not enhance its security at the expense of the other side, has been the key principle of every pan-European security arrangement from the Helsinki Accords of 1975, to the Charter of Paris for a New Europe of 1990, to the establishment of the OSCE in 1994.

However, NATO expansionism and revisionism was clothed in ideology as the military alliance rebranded itself as a “community of democracies”. The argument was that Russia should not be concerned as NATO expansion is tantamount to expanding the zone of peace and stability, which would also benefit Russian security. With this ideological sleight of hand, all pan-European security agreements have been dismantled, and pan-European security predictably collapses.

NATO expansion implicitly entailed presenting Russia with an ultimatum. Moscow could either accept NATO expansion towards Russian borders as a “force for good”, or oppose expansionism and be castigated as an anti-democratic and counter-civilizational force that would have to be contained. Either way, NATO would expand and pan-European security agreements would be rendered insignificant.

The notion that NATO was no longer an anti-Russian alliance rested on a strange logic. Russia could accept that NATO had transformed itself into a peaceful community of values, otherwise, NATO would be compelled to return to its former mission of containing Russia. What was unavoidable has now happened. Russian efforts to contain NATO expansionism are depicted as Russian aggression, which requires NATO to expand membership and push its military infrastructure further towards Russian borders.

Russia has not demanded guarantees from Ukraine that it will not accept NATO membership, and instead has called on NATO not to offer membership in the first place. This may seem like a minor difference, but conflating the two is at the heart of NATO’s propaganda in the Ukraine crisis.

Suddenly, the narrative is no longer that Russia demands that NATO stops expanding an anti-Russian military alliance with a budget more than 10 times that of Russia – a demand compatible with the “indivisible security” principle of every pan-European security agreement. Instead, the conflict is about Russia dictating to its smaller neighbour what it should be allowed to do. With this sleight of hand, a NATO-Russia conflict becomes a Russia-Ukraine conflict, and Russia becomes the revisionist power instead of NATO.

This is obviously a favourable narrative as NATO goes from being the source of instability, to becoming an external security provider “supporting Ukraine”. NATO membership is suddenly not the source of the conflict, but is the solution.