Update on the Military Situation in Ukraine
by
Larry Johnson
A Son of the New American Evolution (March 24, 2022)
https://sonar21.com/update-on-the-military-situation-in-ukraine/

If you are listening to the U.S. media about the war in Ukraine, Russia is struggling and on the ropes. But the map and the following videos tell a different story:

Russia continues to advance on eight fronts in Ukraine. If you look at the purple circle on the far right side of the map (this is the western border of Donetsk), the Russian forces and their Ukrainian allies (the Luhansk People’s Republic and the Donetsk People’s Republic) are encircling the largest remnant of Ukraine’s Army.

Here is the map from two weeks ago: 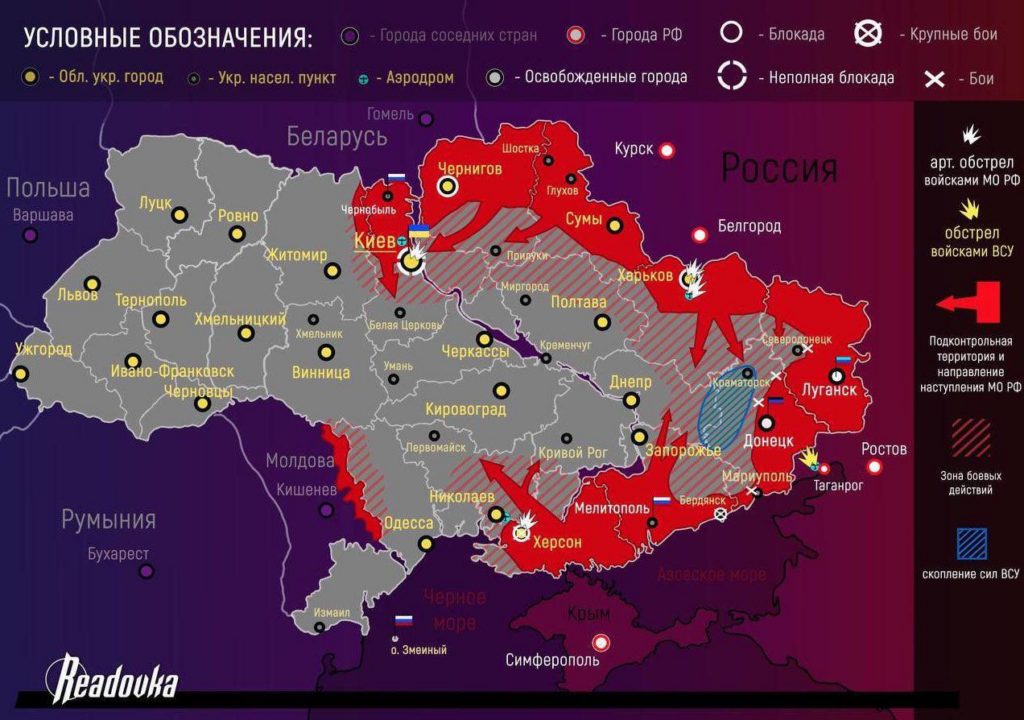 In carrying out its “special military operation” (i.e., invasion) on a broad front, Russia is avoiding leveling cities. The plan appears to be to encircle major cities, cut them off and then, like a boa constrictor, slowly choke their prey into submission.

The Russian, Donetsk and Luhansk forces moving west from the Donbas are cleaning up mine fields and destroying fortified positions. The West has tried unsuccessfully to claim that Putin expected to have this all in hand in a week or so. I have seen no such claim by Putin in public. Putin’s directive to the Russian military is clear and simple–demilitarize Ukraine and destroy the Nazi elements. [emphasis added]

Ukraine, with the help of the western media, has mounted a very effective media propaganda campaign. Unfortunately for Ukraine, it is only whipping up moral support for Ukraine in the West. NATO and the United States have made it clear they are not ready to put western military forces into the fray.

Here is a counter-propaganda video put on today by Russia. It begins with a piece produced by the Ukrainians touting all of their military equipment. The Russians then show what they have done on the ground to that equipment and the soldiers manning it (Warning–this is graphic and harsh):

Western media reports are wrong about Russia’s alleged failure to take Mariupol–Russia is making steady progress taking control of Mariupol. Here are a couple of videos.

The neo-Nazi AZOV battalion comprises the military resistance in Mariupol. Russia gave them till midnight to surrender (that was 6pm edt). We will know by 3pm edt whether the Russians could deliver on their warning.

Ukraine is fighting a defensive war in isolated pockets. I have seen no evidence that Kiev is providing resupply or reinforcements. There is no evidence of another Ukrainian Army mounting a counter-offensive to take the pressure off of what is left of the AZOV battalion. This is not complex analysis–if you are surrounded and forced to fight a defensive battle without resupply or reinforcements, your ability to continue as a combat effect unit rapdily deteriorates [emphasis added]. The following video is in Russian but the images tell the story. You will see the Russian unit discover and destroy a weapons cache of the Ukrainian fighters:

Here is a video showing Chechen troops hoisting a flag over the last building of the District Prosecutor’s Office of the Levoberezhny District:

For those who want to argue this is Russian propaganda I have a simple question–if Zelensky’s military is still viable and strong why are we not seeing any video from new reporters loyal to the government in Kiev reporting on the ground from Mariupol or Kharkiv? I have a simple answer–the Ukrainian military is shattered as an intact force and can no longer conduct multiple operations on multiple fronts. Reporters are not safe on the Ukrainian frontlines. [emphasis added]

Ask yourself another question–if the remaining Ukrainian forces engaging the Russians decided on a tactical withdrawal to a stronger defensive position, where would they go? And would they be able to move? Russia’s control of the air has increased not diminished in the last four weeks. The bulk of the fragmented Ukrainian Army is deployed east of the Dnieper River. In other words, any attempt to effect a tactical retreat will require them to cross a major river that only has a limited number of bridges. All of those roadways and bridges can be quickly eliminated by Russian cruise missiles. The Russians do not need to put pilots at risk and the Ukrainians no longer have any effective air defense capable of downing drones/missiles. [emphasis added]