Last Thursday the first destruction of bridges along Ukrainian railway routes in eastern Ukraine took place. These were important for Ukraine's war effort and especially for the resupplies flowing from west towards the eastern front:

The Ukrainian military, like Russia's, depends on railways for all long distance mass supplies as both have relatively few logistic trucks.

The U.S. and others have said they would give the Ukraine dozens of 155mm towed artillery guns plus tens of thousands of shells with them. The U.S. guns come with one truck each to tow the gun.

That is all manageable so far but now let's look at the logistics (especially without railways). ...

I have estimated that the Ukraine does not have enough trucks to replace railway logistics and those logistics are now falling apart: 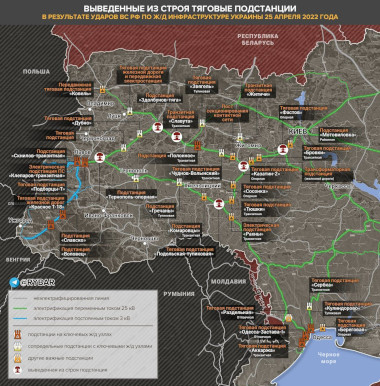 The attacks have been confirmed:

The 'substations' Russia destroyed are the electric ones which supply the electrified long range train routes.

Electrical substation in Krasne, near Lviv was hit by a Russian missile earlier today. Much damage was caused and a large fire was started.

The substations transform higher voltage to whatever the rail network needs. Without the substations, which are not easy to replace, most of Ukraine's locomotives will not run.

Some traffic will continue by using diesel locomotives. However, those are relatively rare as the Wikipedia entry for Ukrainian railways explains:

Diesel locomotives are slower than electrified ones. They also need a lot of diesel which has become rare in Ukraine and must be imported by rail(!) from Slovenia.

Supplying additional diesel locomotives from other countries in eastern Europe will not be possible. The Ukraine has, like Russia, wide gauge tracks of 1,524 mm (5 ft). Most other European countries use a normal gauge of 1,435 mm (4 ft 8+1⁄2 in).

Meanwhile the U.S. announced a vague new aim for its proxy war against Russia:

Austin was in Poland, answering questions from reporters after a brief trip Sunday with Secretary of State Antony Blinken to Kyiv, where the pair met with Ukrainian President Volodymyr Zelensky and other Ukrainian officials.

The defense secretary was asked how he defined “America’s goals for success” in Ukraine. He first said Washington wants to see “Ukraine remain a sovereign country, a democratic country, able to protect its sovereign territory.”

Then, he said, the United States hopes Russia will be “weakened” by the war. “It has already lost a lot of military capability and a lot of its troops, quite frankly, and we want to see them not have the capability to very quickly reproduce that capability,” Austin said.
...
Speaking in a hangar in Poland filled with crates of humanitarian aid, including diapers, destined for Ukraine, the top Biden administration officials announced more than $700 million in new military aid to Ukraine and other countries, and said the United States intends to resume diplomatic operations in Ukraine this week.

All the diapers, weapons and munitions the U.S. and other countries supply to Ukraine will now mostly be stuck in west Ukraine where they will rot until some clever Ukrainian oligarch manages to sell them off to some third country.

The fall out from the railway attacks will also hit civilian supplies in Ukraine. It will hinder civilian passenger traffic especially for people who have fled towards the west and now have less transport available to return home.

Since the war started Russia has intentionally avoided hitting civilian infrastructure in Ukraine. Electricity and communication networks as well as water supplies have all stayed intact. (In recent U.S. wars those were the first things it destroyed.) The attacks on the Ukrainian railway became only necessary after the U.S. and others provided more and more war materials to the Ukraine. Russia will not allow its troops to come under fire from those newly delivered weapons.

Despite warnings from Russia to Ukraine to not attack on Russian ground Ukrainian sabotage groups seem to have some success with destroying Russian infrastructure:

#Russia #Ukraine
Large fire in #Druzhba oil depot in Russia's #Bryansk. Russia said it would investigate the cause of a large fire that erupted in the early hours of the morning at an oil storage facility in the city of Bryansk 154 km northeast of the border with Ukraine.

This is the second large oil storage facility that in recent weeks suffered from such an accident or potential attack. However it is unlikely that this will hinder any Russian operation. Unlike Ukraine Russia has many refineries, very significant reserves and it can move large amounts of diesel by train throughout its country.

Next to its attacks on the Ukraine's traffic infrastructure to impede 'western' resupplies the Russian military continues to soften up the Ukrainian defense lines along the Donbas front. From this mornings 'clobber list' as published by the Russian Defense Ministry:

High-precision sea- and air-based long-range weapons on the northern outskirts of Kremenchuk destroyed fuel production facilities of an oil refinery, as well as storage facilities for oil products to supply military equipment of Ukrainian troops.

During the night, 6 enemy assets were hit by high-precision air-based missiles. Among them: 3 strong points and areas of concentration of manpower and military equipment, as well as 3 ammunition depots in Barvenkovo and Novaya Dmitrovka in Kharkov Region.

In addition, Pantsir-S anti-aircraft missile and cannon system shot down 1 Ukrainian Tochka-U missile and 18 rockets of a multiple-launch rocket system over Chernobaeka.

Since phase two of the war started last week there have been no larger battles. What we have seen so far from the Russian side does not amount to more than armored reconnaissance.

The nearly 1,000 artillery missions in the last 24 hours and on the days before speak of intense preparations for upcoming attacks by Russian mechanized forces. Over all artillery will do the most damage to the Ukrainian troops. In World War II and other modern mechanized wars some 65% of all casualties were caused by artillery strikes. The recent rate on the Ukrainian side will likely be higher.

I have said several weeks ago that the Ukraine has not chance to win in this war. It is losing more and more people and its economy has nearly ceased to exist.

But the U.S. wants to 'weaken' Russia by fighting it to the last Ukrainian. Ukraine's president Zelensky is obviously willing to go with that program. He should instead agree to Russia's reasonable peace conditions. He is destroying the Ukraine by not doing that.

A Politico piece about the situation in Ukraine confirms my above take:

Western countries are rushing heavy weaponry to Ukraine as the war enters what promises to be a deadly, and potentially protracted, new phase.

Those deliveries are coming amid increasingly desperate pleas from Ukrainian battlefield commanders as they endure withering Russian artillery and rocket fire that could last weeks or months.

Here is a realistic view of how the war feels on the ground:

“The situation is very bad, [Russian forces] are using scorched- earth tactics,” the 31-year-old married father of two said via text. “They simply destroy everything with artillery, shelling day and night,” he said via text.

He fears that if reinforcements in the form of manpower and heavy weaponry — particularly air support — don’t arrive in the next few days, his troops could find themselves in the same position as those in Mariupol.

“I don’t know how much strength we will have,” he said, adding that the troops under his command around the city of Avdiivka, near Donetsk, have gone without rest since the start of the war. At least 13 of them have been wounded in recent weeks, he said, and they are running dangerously low on ammunition, reduced to rationing bullets.

The day before, he told POLITICO his soldiers were being bombarded with Russian howitzers, mortars and multiple-launch rocket systems “at the same time.” Just hours earlier, he said, they had been attacked by two Su-25 warplanes, “and our day became hell.”

Skuratovsky had a message for the United States and other NATO countries: “I would like to tell them that grenade launchers are good, but against airstrikes and heavy artillery we will not be able to hold out for long. People can no longer endure daily bombardments. We need air support now. We need drones.”

I feel very sorry for these soldiers and curse their leaders who pushed them into this. Alastair Crooke warns that the 'west' might escalate when it finally recognizes that its proxy war against Russia is lost.

The conviction that the European liberal vision faces humiliation and disdain, were Putin to ‘win’, has taken hold. And in the Obama-Clinton-Deep State nexus, it is unimaginable that Putin and Russia still regarded as the author of Russiagate for many Americans, might prevail.

The logic to this conundrum is inexorable – Escalation.

For Biden, whose approval ratings continue to tank, disaster looms in the November mid-terms.
...
The only possible path out from this approaching cataclysm would be for Biden to pull a rabbit from the Ukraine ‘hat’ (one that, at the very least, would distract from soaring inflation). The Neo-cons and the Deep State (but not the Pentagon) are all for it.

I hope that Biden is still competent enough to recognize that any escalation will lead to a much larger war and, in the end, to a much bigger defeat of 'western' forces than the one that will come in Ukraine [emphasis added].