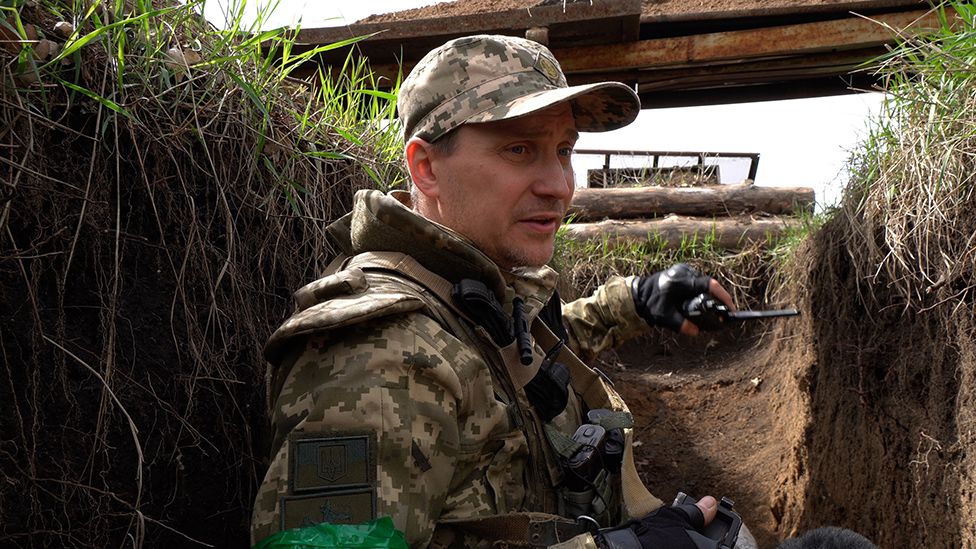 Ukrainian forces have been holding the line in Donbas since 2014, against Russian-backed separatists. They're still holding the line, but what was sporadic fighting has now turned into a full-blown war.

Lieutenant Denys Gordeev is used to war, but not like this. "It's become much harder," he says. "We have bomb attacks, rocket attacks every day, all the time, every hour." Though he has spent eight years battling Russian-backed separatists in the Donbas, now he and his men are facing the full might of the Russian army.

After its retreat from Kyiv three weeks ago, Russia has refocused its military efforts in Eastern Ukraine - with its goal of taking the whole of the Donbas region. It has redeployed many of its units to the east. Western officials estimate that Russia now has about 76 Battalion Tactical Groups in the region - each of which has about 800 men.

They also say there's some evidence Russia's been addressing some of its early mistakes, helped by the fact they're now fighting on fewer fronts, and under a unified command.

The result is that Ukrainian forces are struggling to hold a 300-mile front in the Donbas. They've already lost ground to the Russians and are likely to lose more in the days ahead. Russian forces have been conducting probing attacks to find weak points in Ukraine's defences. 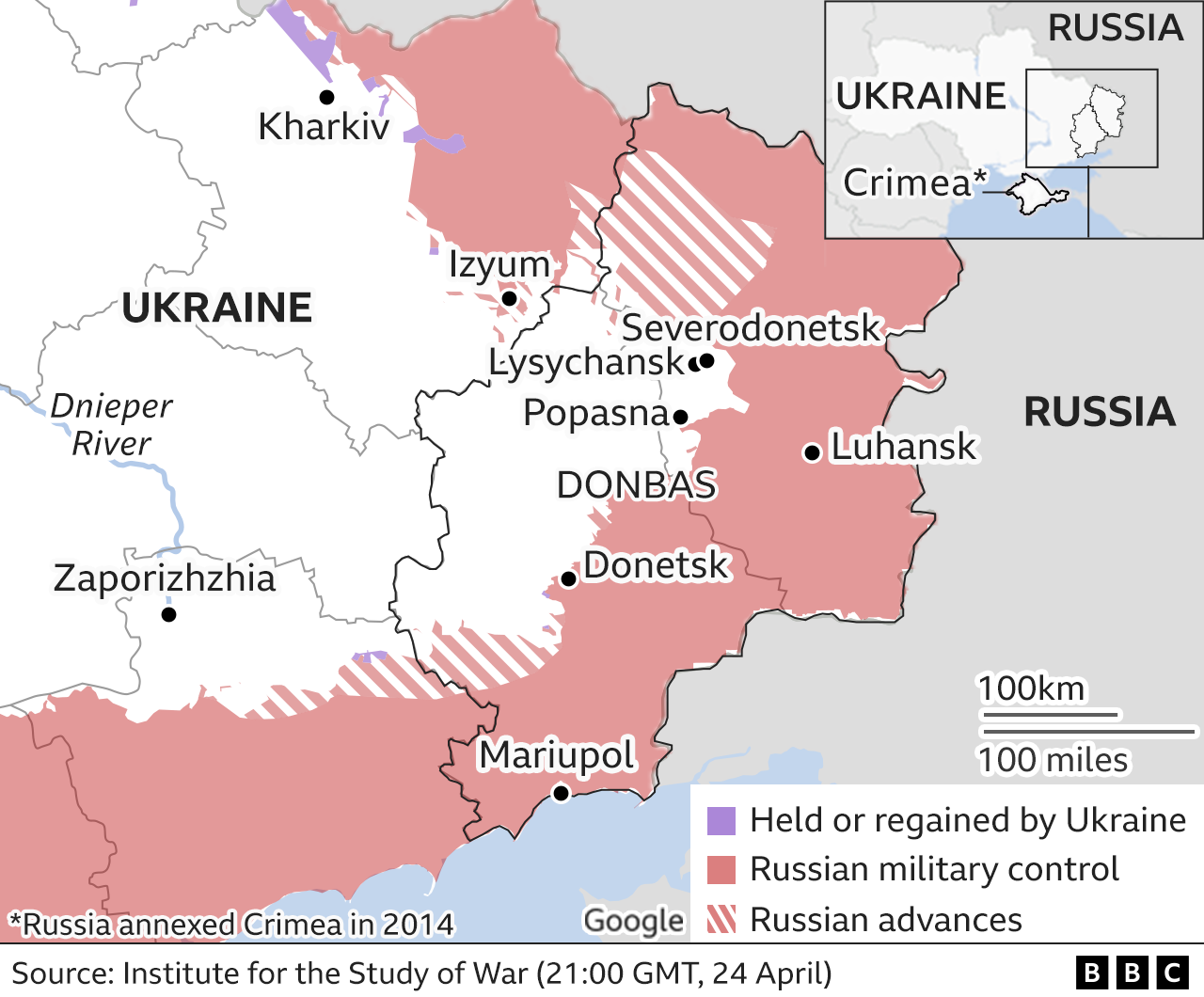 So far they've been gaining ground around the city of Izium in the north, and around Severedonetsk and Popasna to the east. The attacks are coming from multiple directions, though as yet there's been no major Russian breakthrough.

Lt Gordeev says he and his men are experiencing the effects.

The day before we visited, one of his men was killed and another five wounded. It's just a fraction of the casualties Ukrainian forces are now taking every day, though there are no official figures. We tried to visit a field hospital nearby but were told they were too busy.

So is this the big Russian surge that has been widely forecast? Or is this just a prelude to such an onslaught?

It's not clear. For now the invading army is mostly using its artillery and rockets to grind down Ukraine's defences. Some military analysts expect a major assault is still to come.

And Ukrainian forces, including Lt Gordeev and his unit, appear to be holding the line, although Western experts say they are already outnumbered three to one. They also concede that Ukraine will probably have to trade space and ground in open areas to defend key cities where the Russians will find it more difficult to fight.

I was allowed to visit Lt Gordeev's forward position during a brief lull in the fighting. They've built a religious shrine at a command post. They're praying for victory. But it's not the place for contemplation or peace. You could still hear the regular blast of artillery. 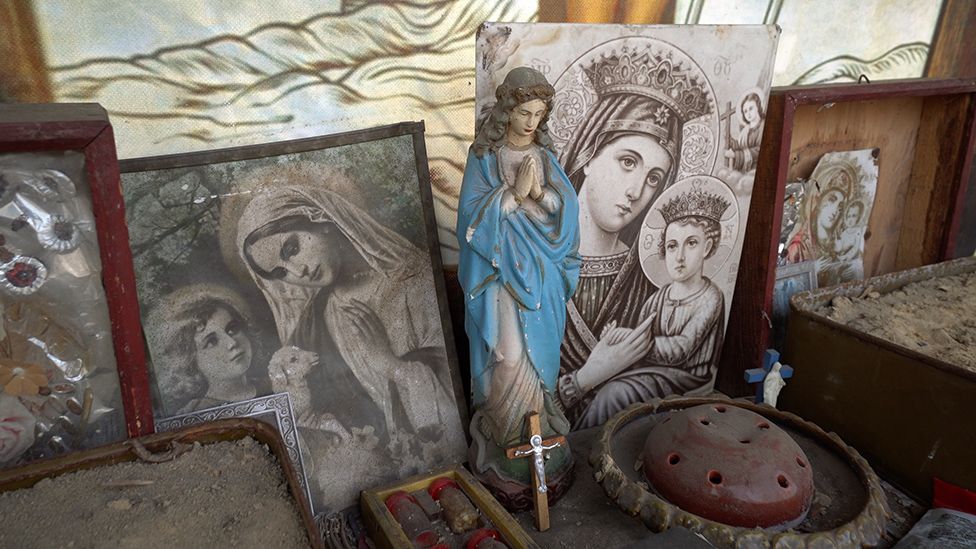 On the short walk to his trench line, he tells me mortar and sniper fire are constant threats. Their closest position is within 600m of Russian forces.

Down in the trenches, out of sight of the enemy, the mood is more relaxed, though the tired faces of soldiers clearly show the strains of recent fighting. They show us some of the weapons they've been using - a DschK Soviet heavy machine gun, still used in conflicts around the world, and a variety of rocket-propelled grenades. It's mostly older Soviet-era kit. but also they proudly show off their one British-made and supplied anti-tank missile - a NLAW (Next generation Light Anti-tank Weapon). 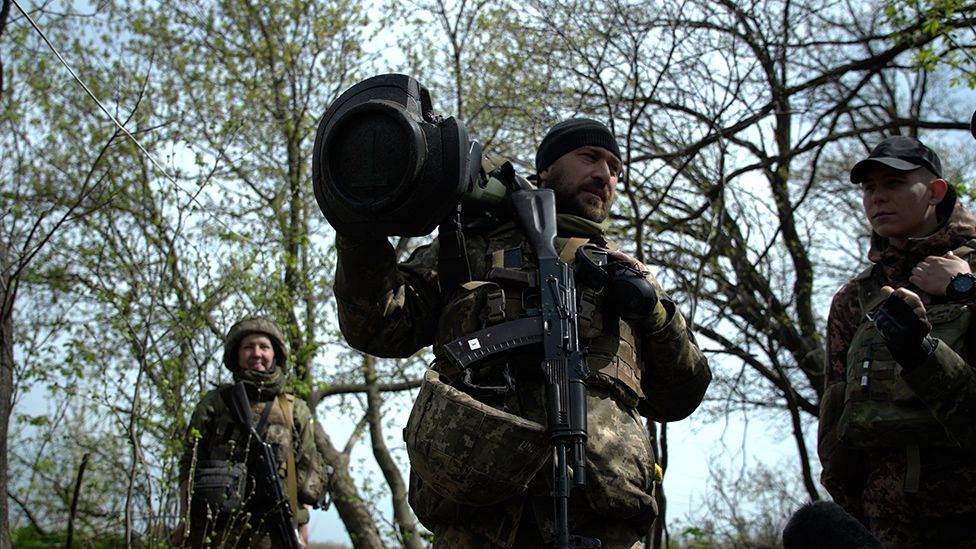 One of Lt Gordeev's men was trained in how to use it by British troops just before the war started. They've already employed it to destroy a Russian tank, they say.

"We need these weapons," says Lt Gordeev repeatedly. Russia, he says, is a "military state" - in contrast, Ukraine's ability to keep its own weapons flowing has been severely damaged. What the West supplies, or does not, will heavily influence the outcome of this war.

• What weapons has the US given Ukraine - and how much do they help?

And Lt Gordeev says the morale of his troops remains high. They're fighting for their homeland.

But President Putin wants and needs something he can call a win, and soon - possibly by 9 May for Russia's victory day parade. Ukraine may have time on its side - but only if the flow of Western weapons continues and if they can hold back the expected Russian onslaught.