"Ukraine - Congress Passes The Bucks, Realism Sneaks In,
Poland Plans For More War"
by b
Moon of Alabama (May 11, 2022)
https://www.moonofalabama.org/2022/05/ukraine-congress-passes-the-bucks-realism-sneaks-in-poland-plans-for-more-war.html

After a lot of talk about defeating Russia in the Ukraine and an alleged lack of Russian fighting abilities Congress passed another $40 billion fund for weapons and economic support. That brings the total to some $53 billion for Ukraine.

Most of the money will go to the U.S. weapon industry, the CIA and to various Ukrainian oligarchs. Hardly anything will be received by those in need.

With that packet now passed reality is allowed to sneak into U.S. media reporting on the issue.

Not one but two reports in the New York Times suddenly lament about the huge area of land the Russian troops have taken in east Ukraine:

• How much of Ukraine does Russia hold?
• Ukraine War’s Geographic Reality: Russia Has Seized Much of the East

Nonetheless, the Donbas seizure, combined with the Russian invasion’s early success in seizing parts of southern Ukraine adjoining the Crimean peninsula, which Russia illegally annexed in 2014, gives the Kremlin enormous leverage in any future negotiation to halt the conflict.

And the Russians enjoy the added advantage of naval dominance in the Black Sea, the only maritime route for Ukrainian trade, which they have paralyzed with an embargo that could eventually starve Ukraine economically and is already contributing to a global grain shortage.

I have often pointed out that the Ukrainian frontline will have a huge number of casualties from Russian artillery strikes. It is even worse than I had thought:

At the main hospital in Kramatorsk, a city in Donetsk, ambulances stream in day and night, carrying soldiers wounded at the front, who describe being pinned down by near constant shelling.

About 80 percent of the patients are wounded by explosives such as mines and artillery shells, said Capt. Eduard Antonovskyy, the deputy commander of the medical unit at the hospital. Because of this, he said, very few patients have serious injuries. Either you’re far enough from an explosion to survive or you aren’t, he said.

“We either get moderate injuries or deaths,” Captain Antonovskyy said.

Additional to those more realistic reports the NYT allowed one of it authors to write an opinion piece against the widening of the war:

• America and Its Allies Want to Bleed Russia. They Really Shouldn’t.

At first, the Western support for Ukraine was mainly designed to defend against the invasion. It is now set on a far grander ambition: to weaken Russia itself. Presented as a common-sense response to Russian aggression, the shift, in fact, amounts to a significant escalation.

By expanding support to Ukraine across the board and shelving any diplomatic effort to stop the fighting, the United States and its allies have greatly increased the danger of an even larger conflict. They are taking a risk far out of step with any realistic strategic gain.
...
When I was in Ukraine during the first weeks of the war, even staunch Ukrainian nationalists expressed views far more pragmatic than those that are routine in America now. Talk of neutral status for Ukraine and internationally monitored plebiscites in Donetsk and Luhansk has been jettisoned in favor of bombast and grandstanding.
...
What’s more, the invasion has led directly to greater military spending in second- and third-tier European powers. The number of NATO troops in Eastern Europe has grown tenfold, and a Nordic expansion of the organization is likely. A general rearmament of Europe is taking place, driven not by desire for autonomy from American power but in service to it. For the United States, this should be success enough. It is unclear what more there is to gain by weakening Russia, beyond fantasies of regime change.
...
Diplomatic efforts ought to be the centerpiece of a new Ukraine strategy. Instead, the war’s boundaries are being expanded and the war itself recast as a struggle between democracy and autocracy, in which the Donbas is the frontier of freedom. This is not just declamatory extravagance. It is reckless. The risks hardly need to be stated.

Indeed. The current U.S. strategy will end in a catastrophe for Ukraine because it is based on false narratives. Lt.Col. (ret) Daniel Davis has consistently provided a more realist view of the military situation in Ukraine. His latest piece fits that record:

Over the past few days, a flurry of senior leaders in both Ukraine and Washington have issued defiant claims of not merely resisting Russian aggression, but pushing towards outright victory. While such aspirations are entirely understandable, it is unwise to set policy seeking a preferred outcome if there does not exist a rational path by which Ukraine could accomplish that objective. At present, most indicators, fundamentals of war, and current battlefield trendlines support the prospect of a Ukrainian defeat.

Davis correctly describes the current military situation on the ground and concludes:

By continuing to seek a military victory in Ukraine, Ukraine’s troops will continue fighting, no negotiated settlement will be realistically sought, and most likely Russian troops continue making progress. As a result, more Ukrainian civilians and troops will continue to be killed and wounded, more cities destroyed, and the economic and food crises – for both Ukraine and the world – will worsen. The most likely outcome will not change (a negotiated settlement, not a Ukrainian military victory), but the cost to Kyiv will be much, much worse.

Another former military man who has a realist view of the war is Col. Douglas Macgregor (ret). During the first Gulf war he led a unit in the Battle of 73 Easting:

Macgregor was the "squadron operations officer who essentially directed the Battle of 73 Easting" during the Gulf War. Facing an Iraqi Republican Guard opponent, he led a contingent consisting of 19 tanks, 26 Bradley Fighting Vehicles and 4 M1064 mortar carriers through the sandstorm to the 73 Easting at roughly 16:18 hours on 26 February 1991 destroyed almost 70 Iraqi armored vehicles with no U.S. casualties in a 23-minute span of the battle.

The previously quoted Lt.Col. Davis was wounded in the same battle. As both men have seen real mechanized war it is not by chance that they have come to similar conclusions.

Macgregor warns of a widening of the war through a Polish intervention in west Ukraine which would eventually drag NATO into the war:

• The Threat of Polish Involvement in Ukraine
The war against Russia in Ukraine has evolved, but not in the way Western observers predicted.

Why would Poland, with the help of Lithuania, try to take western Ukraine? It is all about history:

The Polish–Lithuanian Commonwealth, formally known as the Kingdom of Poland and the Grand Duchy of Lithuania, and, after 1791, as the Commonwealth of Poland, was a country and bi-federation of Poland and Lithuania ruled by a common monarch in real union, who was both King of Poland and Grand Duke of Lithuania. It was one of the largest and most populous countries of 16th to 17th-century Europe. At its largest territorial extent, in the early 17th century, the Commonwealth covered almost 1,000,000 km2 (400,000 sq mi) and as of 1618 sustained a multi-ethnic population of almost 12 million.

Here is how that commonwealth looked on a map with current borders: 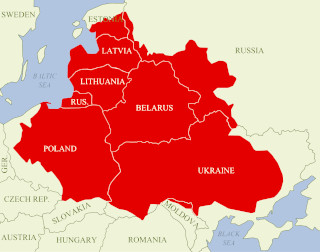 There have been talks for a while that Poland would send a 'peacekeeping' force to occupy Galicia in west-Ukraine. I for one predicted it on February 24, at the very onset of the war:

Thanks to Stalin's additions to the Ukraine three countries, Poland, Hungary and Romania, have claims to certain areas in the Ukraine's western regions. If they want to snatch those up again it is now probably the best time to do so. Despite being part of NATO, which likely would not support such moves, those three will have domestic policy difficulties to withstand the urge.

An official looking document now says that a Polish/Lithuanian operation will start on May 22-24.

Lord Of War @lord_of_war____ - 14:46 UTC · May 10, 2022
🇺🇦🇵🇱The document was sent to the President of the State Border Service of Ukraine, Serhiy Daynek, stating that it is 22-24. May joint "Lithuanian-Polish peacekeeping contingent" consisting of 4 battalions, 9,500 soldiers and 279 units of military equipment [planned to enter the territory of Ukraine. Another confirmation of the development of plans for the occupation and further division of the country. Even if this particular document turns out to be false (which is not excluded), it does not change the general course of the West in relation to Ukraine.] picture

9.500 soldiers are way more than fit into 4 battalions. A battalion has typically some 400-800 soldiers. These are more like three small brigades with 3-4 battalions each.

A Polish/Lithuanian move is exactly what Col. Macgregor is warning of:

Ten weeks after the conflict began, it is instructive to re-examine the strategic picture. The war against Russia in Ukraine has evolved, but not in the way Western observers predicted. Ukrainian forces look shattered and exhausted. The supplies reaching Ukrainian troops fighting in Eastern Ukraine are a fraction of what is needed. In most cases, replacements and new weapons are destroyed long before they reach the front.

Confronted with the unambiguous failure of U.S. assistance and the influx of new weapons to rescue Ukrainian forces from certain destruction, the Biden administration is desperate to reverse the situation and save face. Poland seems to offer a way out. More important, Polish President Andrzej Duda and Ukrainian President Volodymyr Zelensky have both expressed the desire to erase the borders between Poland and Ukraine.

Unconfirmed reports from Warsaw indicate that after Washington rejected the proposals for a no-fly zone over Ukraine, along with the transfer of Polish MIG-29 aircrafts to Ukrainian pilots, the Polish general staff was quietly instructed to formulate plans for intervention in the Ukrainian conflict by seizing the western part of Ukraine. Naturally, military action of this scale would require Kiev’s approval, but given Washington’s de facto control of the Zelensky government, approval for Polish military intervention should not be a problem.

Presumably, the Biden administration may hope that a collision involving Russians and Poles in any form—including air and missile strikes against Polish forces on the Ukrainian side of the border—would potentially call for the NATO council to meet and address Article V of the NATO treaty.

It would mean that NATO, or at least major parts of it, would actively join the Ukrainian proxy war against Russia. While I believe that Russia has withheld forces from the current war to eventually defend against NATO, any entry of it into the war would significantly extend the fighting and the danger of a nuclear exchange would become imminent.