"The end of strategic ambiguity? America has finally stopped pretending it would risk war with Russia over supposed ‘ally’ Ukraine"
by Glenn Diesen, RT.com (May 8, 2021)
https://www.rt.com/russia/523253-ukraine-usa-strategic-ambiguity/ 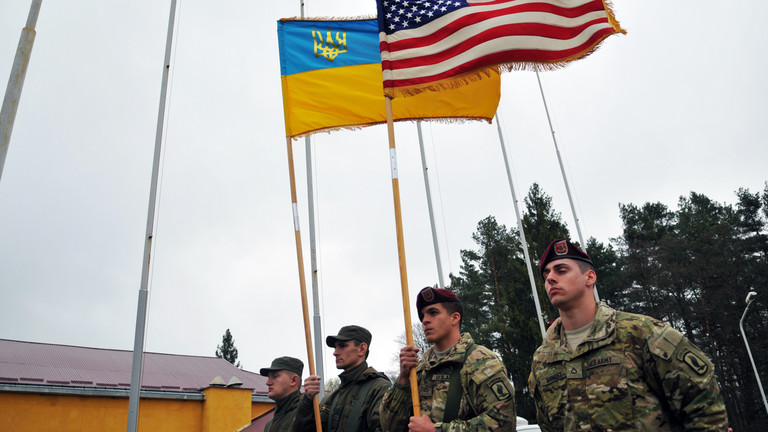 Would the US go to war with Russia over Ukraine? As tensions escalate between Moscow and Kiev, some have warned that the latter’s ‘alliance’ with Washington could spiral into a conflict between the two main nuclear superpowers.

Except, of course, there is no alliance between the US and Ukraine. This week, US Secretary of State Antony Blinken effectively ended the notion that Ukraine has Western backers ready to step in at a moment’s notice if it finds itself under attack.

Pressed on whether American forces could be sent into battle against Russian troops to support Kiev in the event of war in an interview with MSNBC, he answered only that Washington is committed to “helping Ukraine defend itself.”

In other words, no. Indeed, with these words, Blinken backed up suspicions in Moscow that Washington stands ready to fight Moscow down to the very last Ukrainian, but would never risk its own troops.

It is difficult to overstate the importance of the secretary of state’s response, which has effectively ended a calculated policy of strategic ambiguity over Ukraine. For years, the State Department has been reluctant to be drawn on just how far it would go for the Eastern European nation, and whether it would send its own soldiers into battle for its supposed ally.

The fact that mask has slipped now fundamentally changes the nature of the situation. It comes as the White House has also seemingly pivoted its foreign policy in the region by revising a section in an official transcript to play down the prospect of Ukraine joining the NATO military bloc. After turning to the West following the 2014 Maidan, Kiev has played up its credentials with the EU and US, emphasizing the importance of its ‘alliances’ and its role as a vanguard against supposed Russian aggression towards Central Europe. That argument is now based on less and less evidence.

The gamble of strategic ambiguity

Strategic ambiguity, neither confirming nor denying your red lines and potential responses, is often an ideal approach when it concerns the defense of an ally or partner such as Ukraine. Most notably, the US has applied a similar approach to Taiwan.

Suggesting that Washington may provide direct support intends to deter adversarial states like Russia and China, as the added uncertainty about the US response makes it hard to predict how a situation might escalate.

Strategic ambiguity is preferable to making firm commitments to defend its partners for two main reasons – first, the US would lose its credibility in the arena of global security if a war broke out and it decided at the last minute to not live up to its commitments. Second, offering firm promises of support could encourage states like Ukraine or Taiwan to pursue bolder and more aggressive strategies.

With the support of the Americans, for example, Ukraine may be emboldened to attempt to attack and take back the Donbass region by force. Likewise, Taiwan could be emboldened to officially declare independence from China if it believed Washington had its back. Thus, there is the risk that the tail begins wagging the dog, as minor powers like Ukraine and Taiwan would suddenly be capable of influencing their supposed protectors.

For this reason, the US has avoided firm security guarantees towards both Ukraine and Taiwan since neither Russia nor China can be deterred in the event of escalating war scenarios. If Kiev were to attack the Donbass, it would be politically impossible for Russia to stand by, and any sign of weakness would likely embolden NATO to expand into Ukraine, which Moscow deems to be an existential threat. Similarly, it would be impossible for China to accept Taiwan’s secession, seeing it instead as a repetition of the so-called Century of Humiliation, with the subsequent intolerable domestic and international consequences that entailed.

The failure of strategic ambiguity in Ukraine

Strategic ambiguity failed in Ukraine because it created unrealistic expectations. The policy was not intended to deter a Russian invasion, but to enable Kiev to negotiate a more favorable political settlement to fighting in the Donbass, between its forces and those loyal to the two self-declared People’s Republics.

That negotiated settlement came in the form of the Minsk Agreement, which Kiev also signed. The agreement explicitly demands that Kiev establish direct diplomatic ties with the leaders in the breakaway regions to negotiate constitutional changes, including decentralizing power in order to grant the east of the country a degree of autonomy in a reunited Ukraine. However, years have passed and Kiev has been reluctant to honor its obligations and establish that dialogue with local leaders.

Instead of fulfilling its role as required under the Minsk Agreement, Ukraine has aimed to renegotiate the entire agreement while changing the realities on the ground – rebuilding its military power, mobilizing support from Western powers, and intensifying sanctions against Russia.

Washington has continuously signaled that it supports Kiev’s efforts to repudiate the treaty, while Western Europe has been unwilling to put any pressure on Ukraine to seek to implement the terms of the deal. Washington’s continuous references to Ukraine as an “ally” and promises of NATO membership undoubtedly gave Kiev the expectation of US support in its bid to scrap the Minsk Agreement, and potentially even if it attempts to resolve the conflict by force.

The recent mobilization of Ukrainian troops towards the contact line with Donbass was intended to be the pinnacle of pressure on Russia to renegotiate the settlement along terms more favorable to Kiev. However, the Russian military build-up along the border destroyed Kiev’s entire strategy. Moscow signaled clearly that it will uphold its red lines irrespective of the cost, for the simple reason that NATO’s continued expansion is considered an existential threat.

Unwilling to go to war against Russia, the G7 countries have since instead affirmed that the Minsk Agreement is the sole solution to the conflict. Without the possibility of renegotiating the pact, Ukraine is at a crossroads. An attack on the Donbass would almost certainly result in defeat and even potentially lead to the destruction of Ukraine as a state, while honoring the Minsk Agreement would make the country’s president, Volodymyr Zelensky, vulnerable to the far-right nationalists that could topple him in another supposedly ‘democratic revolution’.

Zelensky is in a difficult spot as he is being forced to withdraw with no real gains, and desperate times often call for desperate measures. By making it clear that it will not defend Ukraine, the US is discouraging Kiev and the right-wing militias from engaging in reckless actions. Furthermore, it also signals to Moscow that Washington is committed to de-escalation and Russia does not need to take unilateral actions to resolve the conflict.

What will Russia do? Returning to the revisionism versus status quo debate

What will happen now as Washington withdraws its strategic ambiguity by making it clear the US will not defend Ukraine? Will Russia invade or de-escalate?

A revisionist power is defined as one that seeks to change current circumstances to obtain a more favorable balance of power, while a status-quo power aims to preserve its existing position against the challenges of revisionists who want to reopen old conflicts.

The narrative that Russia is a revisionist power, spun by the Western political and media classes, infers that without a security guarantee from the US, Russia is free to conquer Ukraine and “restore the Soviet Empire.” However, that will be challenged if the US’ signals that it is no longer providing security guarantees result in Russia de-escalating, because the threat of an offensive in the east of the country and NATO expansion are minimized.

The theory of an expansionist and revisionist Russia has repeatedly failed. It was argued that Russia would go on to invade Georgia when the country intervened in response to Tbilisi’s attack on South Ossetia in 2008. Instead, Moscow merely restored the status-quo by pushing the Georgian troops out of South Ossetia. In 2015, Russia intervened in Syria to prevent Western-backed regime change, and again to preserve the status quo. In Ukraine, Russia has similarly aimed to defend the local population in Donbass following the 2014 coup and prevent further NATO expansionism.

Are US security guarantees and NATO expansion instruments of revisionism in Europe or are they preserving the status quo? This question seems to have now been answered, as promises of military support and bloc membership are walked back, opening the door for a peaceful settlement in Ukraine.

Note: Glenn Diesen, Professor at the University of South-Eastern Norway and an editor at the Russia in Global Affairs journal. Follow him on Twitter @glenndiesen