The U.S. has sent thousands more troops to Europe, and spent billions on weapons for Ukraine. Meanwhile, the Pentagon’s budget continues to grow. Americans are paying the price for it. 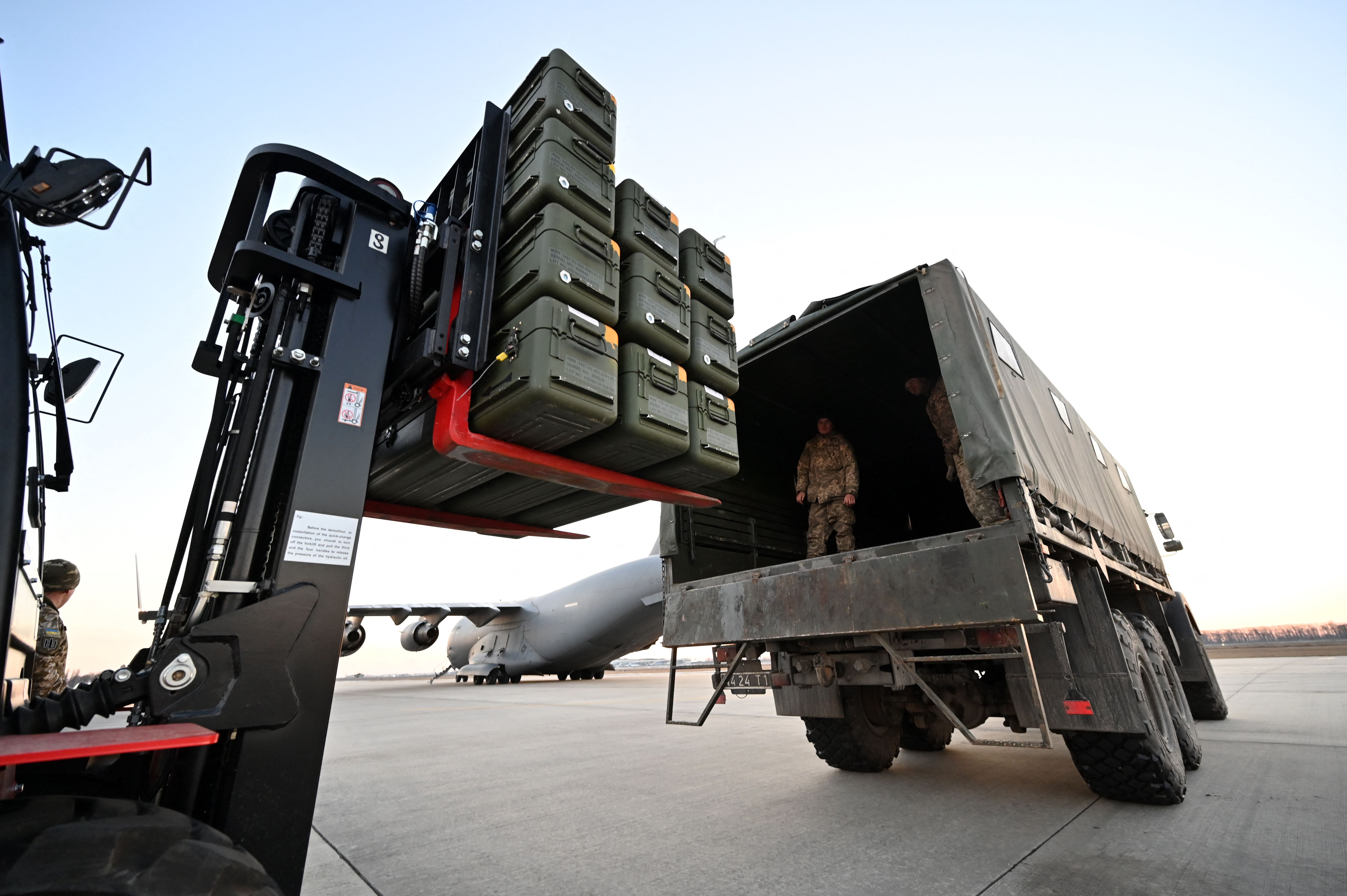 In Shakespeare’s Henry IV, Part II, the dying monarch famously counsels Prince Hal “to busy giddy minds with foreign quarrels,” a practice certain to “waste the memory of the former days.” For American politicians and pundits given to giddiness—and to distracting attention from recent failures—the proxy war in Ukraine is the perfect foreign quarrel. It is rejuvenating Cold War–style militarized globalism as the cornerstone of U.S. national security policy.

For those on the antiwar left or the anti-interventionist right, this comes as a worrisome development. Within establishment circles, however, it is encouraging good news. Writing in National Review, the reliably bellicose Elliot Abrams looked forward with evident anticipation to “a dangerous and lengthy struggle” with Russia “that may last for generations.” In the pages of The Week, the typically dovish Damon Linker threw in with the likes of Abrams. “The Ukraine invasion marks a return to a world primarily dominated by competition and hostility among states,” he wrote. “Such a world resembles the Cold War, but also the world that preceded the Cold War.” It was back to the darkest days of the twentieth century.

The hawks’ position is winning out. In March, the Pentagon ordered roughly 12,000 troops to the continent, bringing the total U.S. presence in Central and Eastern Europe from 60,000 personnel to more than 100,000. Earlier this month, Army Gen. Mark Milley, the chairman of the Joint Chiefs of Staff, advised that the U.S. deploy yet more troops and develop additional bases in the region. Meanwhile, Congress and President Biden have already allocated $13.6 billion in aid to Ukraine, nearly half of which is termed “lethal”: $6.5 billion to fund arms for Ukraine and the aforementioned troop deployment. On Thursday, Biden asked Congress for an additional $33 billion in aid, $20 billion of which would “provide weapons to Ukraine, replenish U.S. arms stockpiles, and help other countries shift away from a dependence on Russian weapons,” NPR reported.

The consequences of this war—undeniably our war, too, given the number of Russian soldiers killed by U.S.-supplied weaponry—will not become fully apparent for some time. Yet we can already glimpse its probable impact on American politics and on U.S. national security priorities. That impact is likely to be profound and almost certainly destructive. Put simply, the war will divert attention and resources from more urgent priorities. In fact, given where negotiations stand on a hollowed-out version of Biden’s Build Back Better, it already is doing so.

It’s a disappointing turn of events, but not entirely surprising to those who listened closely to the president’s message on the campaign trail and at the outset of his term. Biden has consistently argued that the contest between autocracy and democracy is the central crisis of our era. At a moment when the planet faces an unprecedented threat in the form of climate change, while America’s own democracy is mired in dysfunction, this perspective qualifies as a gross oversimplification.

Take at face value the depiction offered by the administration and echoed by most mainstream media outlets, however, and Ukraine fits nicely into Biden’s preferred framework. With good pitted against evil, the war replays—and seemingly revalidates—the canonical events of the American Century. In an instant, the disappointments of the post–Cold War decades are essentially forgotten.

Russian aggression and brutality thereby provide a rationale for discounting bothersome historical complexities dating from prior to, during, and after the existence of the Soviet Union, the reckless folly of NATO expansion not least among them. Ukrainian President Volodymyr Zelenskiy’s interpretation of events is deemed authoritative, even as U.S. war aims diverge from Ukraine’s. With weakening Russia now an explicit U.S. policy objective—“We want to see Russia weakened to the degree that it can’t do the kinds of things that it has done in invading Ukraine,” Defense Secretary Lloyd Austin said on Monday—it serves Washington’s purposes not to end the fighting, but to prolong it. Whether that prospect squares with the desires of the average Ukrainian qualifies at best as an afterthought.

Of even greater immediate significance, the terms of U.S. involvement—providing Ukraine with massive quantities of arms without (thus far) sustaining a single American casualty—go far toward erasing memories of other wars in our very recent past. Just last year, the embarrassing U.S. evacuation from Kabul seemed like a big deal. Today it counts for nothing, as do our military misadventures in Afghanistan and Iraq. The military-industrial-congressional complex has moved on, with Ukraine a “good war” behind which Americans of all political persuasions can—or ostensibly should—rally.

Classifying Ukraine as such has practical implications. It imparts new life to discredited or outdated habits dating from the Cold War. For example, it is renewing the national security state’s penchant for threat inflation as a device to boost U.S. military spending. Despite the Russian army’s abysmal battlefield performance, scaremongers in and out of government will warn of the grave danger posed by the Kremlin—or by a “Sino-Russian Axis”—for years to come.

So with broad bipartisan support, the Pentagon’s budget, easily the world’s largest, continues to grow. One consequence is to assure arms manufacturers of massive contracts, not only to replenish the weapons stocks drawn down in support of the Ukrainian war effort but also to equip U.S. forces with the “next generation” of advanced weaponry. Thanks to Vladimir Putin, in other words, generous increases in Pentagon spending are all but assured. So too, should anyone bother to notice, are more years of huge federal deficits.

But consider this less immediate concern: U.S. involvement in the Ukraine war undermines prospects for restoring even a modicum of equilibrium to American politics. Today, of course, there is no existing consensus as to what any such equilibrium might entail. Per Shakespeare, crises abroad provide a convenient excuse for allowing pressing domestic concerns to fester. And so, in America, some 12 million American children live in poverty, more than 100,000 people died of drug overdoses last year, and hundreds of thousands—we don’t even know how many—experience homelessness.

As the Biden administration supplies Ukraine with greater sums of money, provides its military with heavier weapons, and sends ever more senior U.S. officials to visit Kyiv, the drift of U.S. policy toward ever more direct American participation in the war becomes apparent. Indeed, as Biden’s political standing at home continues to plummet, the temptation to double down in Ukraine to salvage his presidency is likely to grow.

Let there be no doubt: Down that path lies the prospect of involving the U.S. military in direct combat, along with the concurrent risk of nuclear confrontation. On that score, to quote a famous American general, Ukraine may well prove to be “the wrong war at the wrong place, at the wrong time, and with the wrong enemy.” Should that occur, any hope of “building back better,” or even of preserving what we have, will evaporate.

Andrew Bacevich is president of the Quincy Institute for Responsible Statecraft. His most recent book is After the Apocalypse: America’s Role in a World Transformed.