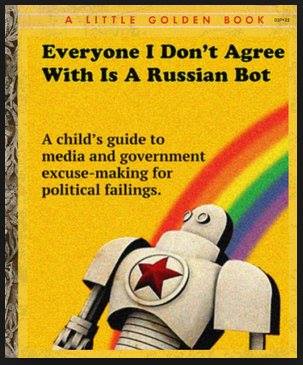 The Russians are back, paired alongside the American intelligence agencies playing deep inside our elections again. Who should we worry more about? Hint: Not the Russians.

On February 13 the election security czar in the Office of the Director of National Intelligence (ODNI) briefed the House Intelligence Committee that the Russians were meddling again, and that they favored Trump. A few weeks earlier, the ODNI briefed the Sanders campaign the Russians were also meddling in the primaries, this time in his favor. Both briefings remained secret until this past week, when the former was leaked to the NYT in time to make smear Trump for replacing his DNI, and the latter leaked to the WaPo ahead of the Nevada caucuses to try and damage Sanders.

You didn’t think after 2016 those bad boys of the intel “community” (which makes it sound like they all live together down in Florida somewhere) weren’t going to play again, and that they wouldn’t learn from their mistakes. Those mistakes were in retrospect amateurish. A salacious dossier built around a pee tape? Nefarious academics befriending minor Trump campaign staffers who would tell all to an Aussie ambassador trolling London’s pubs looking for young, fit Americans? Falsified FISA applications when it was all too obvious even Trumpkin greenhorns weren’t dumb enough to sleep with FBI honeypots? You’d think after influencing 85 elections across the globe since WWII the community would have be better at it, sure, but you also knew after failing to whomp a bumpkin like Trump once they would keep trying.

Like any good intel op, you start with a tickle, make it seem like the targets are figuring it out for themselves. Get it out there Trump offered Wikileaks’ Julian Assange a pardon if he would state publicly Russia wasn’t involved in the 2016 DNC leaks. The story was all garbage, not the least of which was because Assange has been clear for years it wasn’t the Russians. And there was actually no offer of a pardon from the White House. And conveniently Assange is locked in a foreign prison and can’t comment. Whatever, time the Assange story to hit the day after Trump pardoned numerous high-profile scum bag white-collar criminals, so even the casual reader had Trump = Russians = Bad on their minds. You could just almost imagine a baritone announcer’s voice intoning “Previously, on Russiagate I…” as they whole thing unfolded.

Then only a day after the Assange story (why be subtle?), let the sequel hit the theatres with the timed leaks to the NYT and WaPo. Then stand back and watch the MSM descend into free fall.

CNN concluded “America’s Russia nightmare is back.” Maddow was ecstatic, bleating out “Here we go again” realizing her failed conspiracy theories could be recycled whole. Everybody quoted Have Adam Schiff firing off Trump was “again jeopardizing our efforts to stop foreign meddling.” Tying it all to the failed impeachment efforts, another writer said “’Let the Voters Decide’ doesn’t work if Trump fires his national security staff so Russia can help him again.” The NYT fretted “Trump is intensifying his efforts to undermine the nation’s intelligence agencies.” Former CIA Director John Brennan (after leaking for a while, most boils dry up and go away) said “we are now in a full-blown national security crisis.” The undead Hillary Clinton tweeted “Putin’s Puppet is at it again, taking Russian help for himself.” It is reportedly clear we’ll be hearing breaking and developing reports about this from sources believed to be close to those in the know through November. Intel community 1, Trump 0.

Kind of a miss on Bernie. He did very well in Nevada despite the leaks. But the Great Game of Russiagate II has a long way to go. Bernie himself assured us of that. Instead of poo-pooing the idea the Russians would be working for him, he instead gave it cred, saying “Some of the ugly stuff on the internet attributed to our campaign may well not be coming from real supporters.” Sanders handed Russiagate II legs, signaling he’ll use it as cover for the Bernie Bros online shenanigans called out at the last debates. That’s playing with fire; it’ll be too easy later on to invoke all this around Comrade Bernie memes in the already wary purple states [emphasis added].

Summary to Date: Everyone is certain the Russians are working to influence the election… (adopts cartoon Russian accent which also sounds a bit like WWII movie Nazi) but who is the cat and who is the mouse?

Is Putin helping Trump get re-elected to remain his asset in place? Or is Putin helping Bernie “I Honeymooned in the Soviet Union” Sanders to make him look like an asset to help Trump? Or are the Russkies really all-in because Bernie is a True Socialist sleeper agent at heart, the Emma Goldman of his time (Bernie’s old enough to have taken Emma to his high school prom)? Or is it not the Russians but the American intel community helping Bernie to make it look like Putin is helping Bernie to help Trump? Or is it the Deep State saying the Reds are helping Bernie to hurt Bernie to help their man Bloomberg? Are the Russian spies tripping over the American spies in caucus hallways trying to get to the front of the room? Who can tell what is really afoot?

See, the devil is in the details, which is why we don’t have any.

The world’s greatest intelligence team can’t seem to come up with anything more specific than words like “interfering” and “meddling,” as if pesky Aunt Vladimir is gossiping at the general store again. CBS reported House members pressed the ODNI for evidence, such as phone intercepts or other SIGINT to back up claims Russia is trying to help Trump, but briefers had none to offer [emphasis added]. Even Jake Tapper, a Deep State loyalty card holder, raised some doubts. WaPo, who hosted one of the leaks, had to admit deep in its story “It is not clear what form that Russian assistance has taken.” Just take our word for it, it’s Russia.

Yes, yes, have to protect sources and methods, but of course the quickest way to stop Russian influence is to expose it. Instead, the ODNI dropped the turd in the punchbowl and walked away. Why not tell the public what media is being bought, which outlets are working, willingly or not, with Putin? [emphasis added] Will we be left hanging with the claim “it was something something social media” again? Did the Reds buy $100 of Facebook ads or implant a radio chip in Biden’s skull? If you’re going to scream Communist zombies with MAGA hats are inside the house you’re obligated to provide a little bit more information. Why is it when specifics are required the response is only something like “Well, the Russians are sowing distrust and turning Americans against themselves in a way that weakens national unity” as if we’re all not eating enough green vegetables. Why leave us exposed to Russian influence for even a second when it could all be shut down in an instant?

Because the intel community learned its lesson in Russiagate I. Details can eventually be investigated. That’s where the old story fell apart. The dossier wasn’t true. Michael Cohen never met the Russians in Prague. Oops. The a-ha discovery was that voters don’t read much anyway, so just make claims. You’ll never really prosecute or impeach anyone, so why bother with evidence. Just throw out accusations and let the media fill it all in for you. After all, they managed to convince a large number of Americans Trump’s primary purpose in running for president was to fill vacant hotel rooms at his properties. Let the nature of the source — the brave lads of the intelligence agencies — legitimize the accusations this time, not facts [emphasis added].

It will take a while to figure out who is playing who. Is the goal to help Trump, help Bernie, or defeat both of them to support Bloomberg? But don’t let the challenge of seeing the whole picture obscure the obvious: the American intelligence agencies are once again inside our election [emphasis added].

The good news from 2016 was the Deep State turned out to be less competent than we originally feared. But they have learned much from those mistakes, particularly how deft a tool a compliant MSM is. This election will be a historian’s marker for how a decent nation, fully warned in 2016, fooled itself in 2020 into self-harm. Forget about foreigners influencing our elections from outside; the zombies are already inside the house [emphasis added].