The more insurmountable the crisis becomes, the more we, like our prehistoric ancestors, will retreat into self-defeating responses, violence, magical thinking and denial. 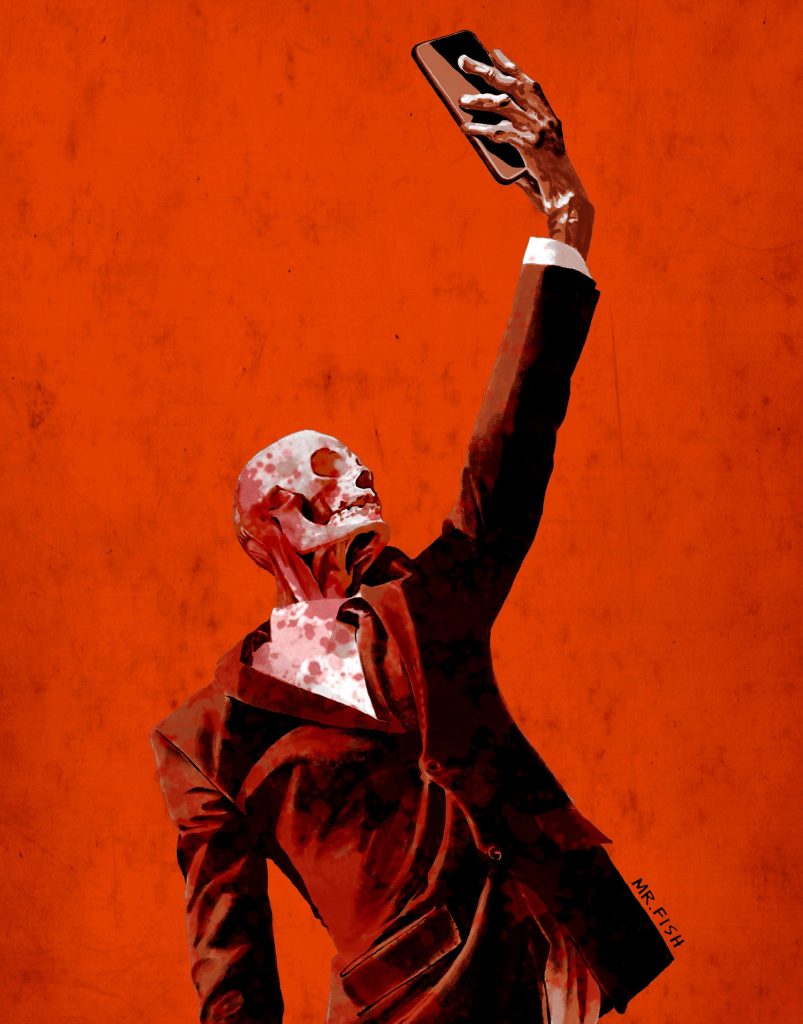 I am standing atop a 100-foot-high temple mound, the largest known earthwork in the Americas built by prehistoric peoples. The temperatures, in the high 80s, along with the oppressive humidity, have emptied the park of all but a handful of visitors. My shirt is matted with sweat.

I look out from the structure — known as Monks Mound — at the flatlands below, with smaller mounds dotting the distance. These earthen mounds, built at a confluence of the Illinois, Mississippi and Missouri rivers, are all that remain of one of the largest pre-Columbian settlements north of Mexico, occupied from around 800 to 1,400 AD by perhaps as many as 20,000 people.

This great city, perhaps the greatest in North America at the time, rose, flourished, fell into decline and was ultimately abandoned. Civilizations die in familiar patterns. They exhaust natural resources. They spawn parasitic elites who plunder and loot the institutions and systems that make a complex society possible. They engage in futile and self-defeating wars. And then the rot sets in.

The great urban centers die first, falling into irreversible decay. Central authority unravels. Artistic expression and intellectual inquiry are replaced by a new dark age, the triumph of tawdry spectacle and the celebration of crowd-pleasing imbecility.

“Collapse occurs, and can only occur, in a power vacuum,” anthropologist Joseph Tainter writes in The Collapse of Complex Societies. “Collapse is possible only where there is no competitor strong enough to fill the political vacuum of disintegration.”

Several centuries ago, the rulers of this vast city complex, which covered some 4,000 acres, including a 40-acre central plaza, stood where I stood. They no doubt saw below in the teeming settlements an unassailable power, with at least 120 temple mounds used as residences, sacred ceremonial sites, tombs, meeting centers and ball courts.

Cahokia warriors dominated a vast territory from which they exacted tribute to enrich the ruling class of this highly stratified society. Reading the heavens, these mound builders constructed several circular astronomical observatories — wooden versions of Stonehenge. 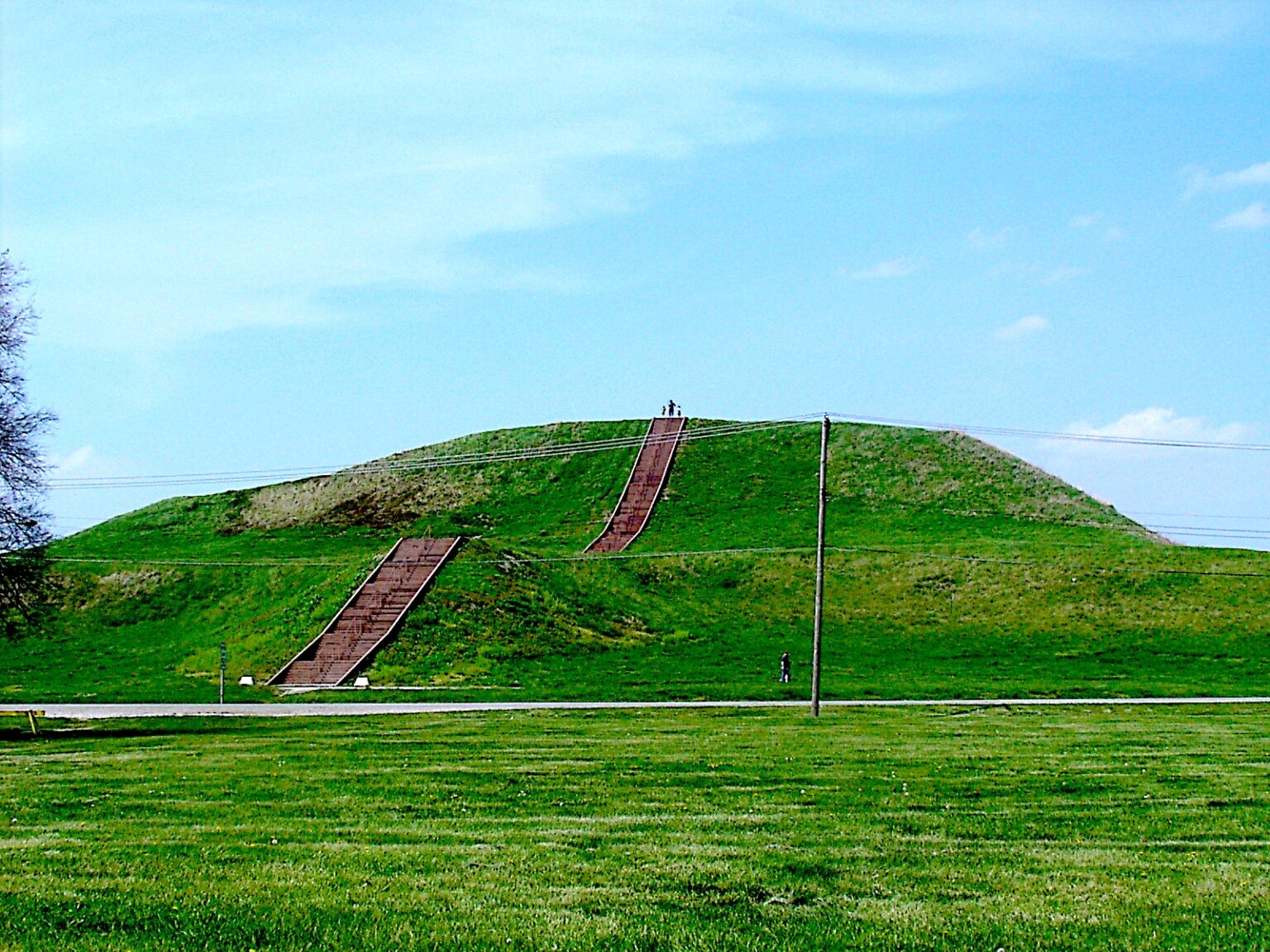 The city’s hereditary rulers were venerated in life and death. A half mile from Monks Mound is the seven-foot-high Mound 72, in which archeologists found the remains of a man on a platform covered with 20,000 conch-shell disc beads from the Gulf of Mexico.

The beads were arranged in the shape of a falcon, with the falcon’s head beneath and beside the man’s head. Its wings and tail were placed underneath the man’s arms and legs. Below this layer of shells was the body of another man, buried face downward. Around these two men were six more human remains, possibly retainers, who may have been put to death to accompany the entombed man in the afterlife.

Nearby were buried the remains of 53 girls and women ranging in age from 15 to 30, laid out in rows in two layers separated by matting. They appeared to have been strangled to death.

The poet Paul Valéry noted, “a civilization has the same fragility as a life.”

Across the Mississippi River from Monks Mound, the city skyline of St. Louis is visible. It is hard not to see our own collapse in that of Cahokia. In 1950, St. Louis was the eighth-largest city in the United States, with a population of 856,796. Today, that number has fallen to below 300,000, a drop of some 65 percent. Major employers — Anheuser-Busch, McDonnell-Douglas, TWA, Southwestern Bell and Ralston Purina — have dramatically reduced their presence or left altogether. St. Louis is consistently ranked one of the most dangerous cities in the country. One in five people live in poverty. 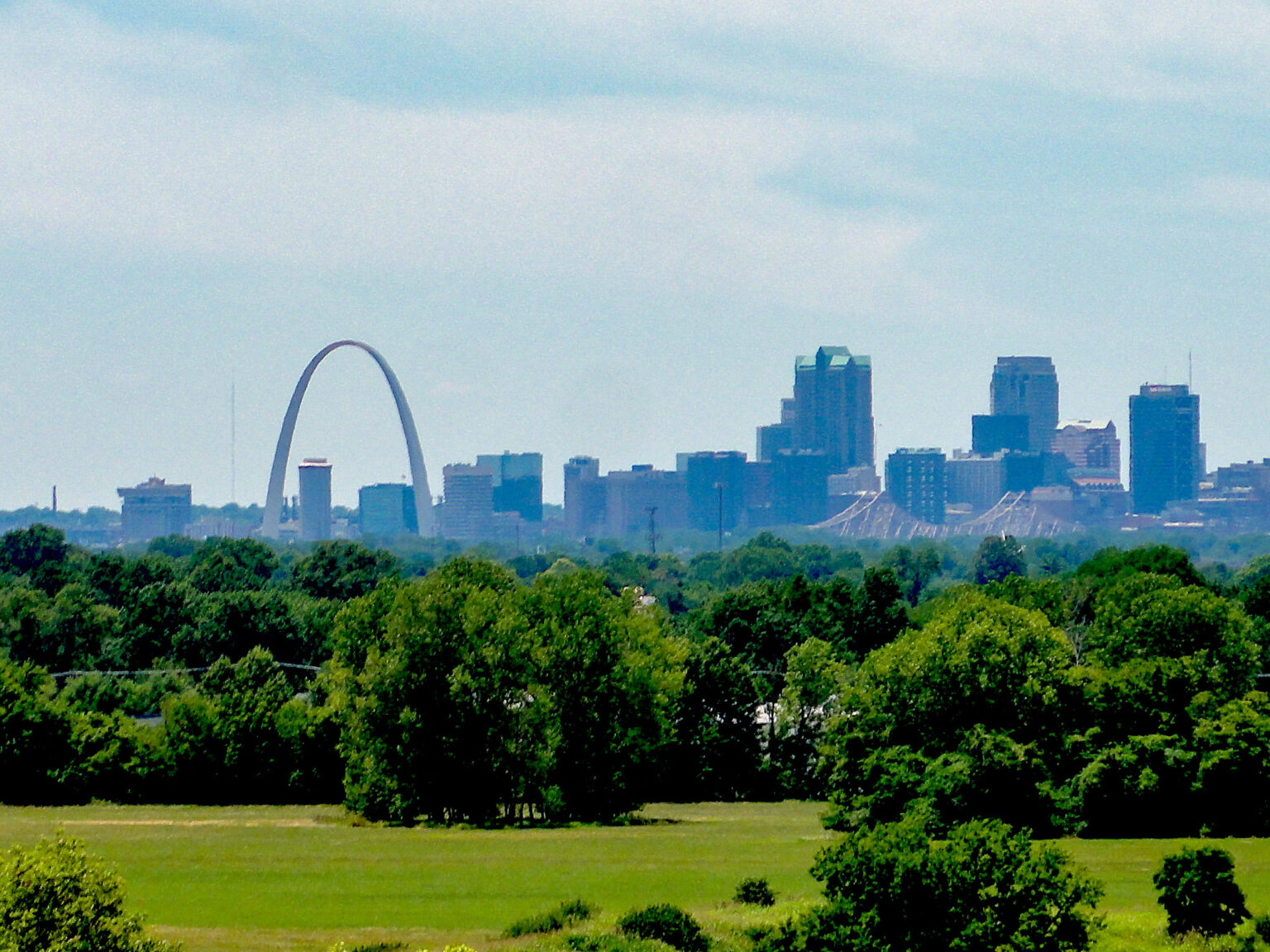 The St. Louis Metropolitan Police Department has the highest rate of police killings per capita, of the 100 largest police departments in the nation, according to a 2021 report. Prisoners in the city’s squalid jails, where 47 people died in custody between 2009 and 2019, complain of water being shut off from their cells for hours and guards routinely pepper spraying inmates, including those on suicide watch.

The city’s crumbling infrastructure, hundreds of gutted and abandoned buildings, empty factories, vacant warehouses and impoverished neighborhoods replicate the ruins of other post-industrial American cities, the classic signposts of a civilization in terminal decline.

“Just as in the past, countries that are environmentally stressed, overpopulated, or both, become at risk of getting politically stressed, and of their governments collapsing,” Jared Diamond argues in Collapse: How Societies Choose to Fail or Succeed.

“When people are desperate, undernourished and without hope, they blame their governments, which they see as responsible for or unable to solve their problems. They try to emigrate at any cost. They fight each other over land. They kill each other. They start civil wars. They figure that they have nothing to lose, so they become terrorists, or they support or tolerate terrorism.”

Pre-industrial civilizations were dependent on the limits of solar energy and constrained by roads and waterways, impediments that were obliterated when fossil fuel became an energy source. As industrial empires became global, their increase in size meant an increase in complexity. Ironically, this complexity makes us more vulnerable to catastrophic collapse, not less.

Soaring temperatures (Iraq is enduring 120 degree heat that has fried the country’s electrical grid), the depletion of natural resources, flooding, droughts, (the worst drought in 500 years is devastating Western, Central and Southern Europe and is expected to see a decline in crop yields of 8 or 9 percent), power outages, wars, pandemics, a rise in zoonotic diseases and breakdowns in supply chains combine to shake the foundations of industrial society.

The Arctic has been heating up four times faster than the global average, resulting in an accelerated melting of the Greenland ice sheet and freakish weather patterns. The Barents Sea north of Norway and Russia are warming up to seven times faster. Climate scientists did not expect this extreme weather until 2050.

“Each time history repeats itself, the price goes up,” the anthropologist Ronald Wright warns, calling industrial society “a suicide machine.”

In A Short History of Progress, he writes:

“Civilization is an experiment, a very recent way of life in the human career, and it has a habit of walking into what I am calling progress traps. A small village on good land beside a river is a good idea; but when the village grows into a city and paves over the good land, it becomes a bad idea. While prevention might have been easy, a cure may be impossible: a city isn’t easily moved. This human inability to foresee — or to watch out for — long-range consequences may be inherent to our kind, shaped by the millions of years when we lived from hand to mouth by hunting and gathering. It may also be little more than a mix of inertia, greed, and foolishness encouraged by the shape of the social pyramid. The concentration of power at the top of large-scale societies gives the elite a vested interest in the status quo; they continue to prosper in darkening times long after the environment and general populace begin to suffer.”

Wright also reflects upon what will be left behind:

“The archaeologists who dig us up will need to wear hazmat suits. Humankind will leave a telltale layer in the fossil record composed of everything we produce, from mounds of chicken bones, wet-wipes, tires, mattresses and other household waste to metals, concrete, plastics, industrial chemicals, and the nuclear residue of power plants and weaponry. We are cheating our children, handing them tawdry luxuries and addictive gadgets while we take away what’s left of the wealth, wonder and possibility of the pristine Earth.

Calculations of humanity’s footprint suggest we have been in ‘ecological deficit,’ taking more than Earth’s biological systems can withstand, for at least 30 years. Topsoil is being lost far faster than nature can replenish it; 30 percent of arable land has been exhausted since the mid-20th century.

We have financed this monstrous debt by colonizing both past and future, drawing energy, chemical fertilizer and pesticides from the planet’s fossil carbon, and throwing the consequences onto coming generations of our species and all others. Some of those species have already been bankrupted: they are extinct. Others will follow.”

As Cahokia declined, violence dramatically increased. Surrounding towns were burned to the ground. Groups, numbering in the hundreds, were slaughtered and buried in mass graves. At the end, “the enemy killed all people indiscriminately. The intent was not merely prestige, but an early form of ethnic cleansing” writes anthropologist Timothy R. Pauketat, in Ancient Cahokia and the Mississippians.

He notes that, in one 15th-century cemetery in central Illinois, one-third of all adults had been killed by blows to the head, arrow wounds or scalping. Many showed evidence of fractures on their arms from vain attempts to fight off their attackers. 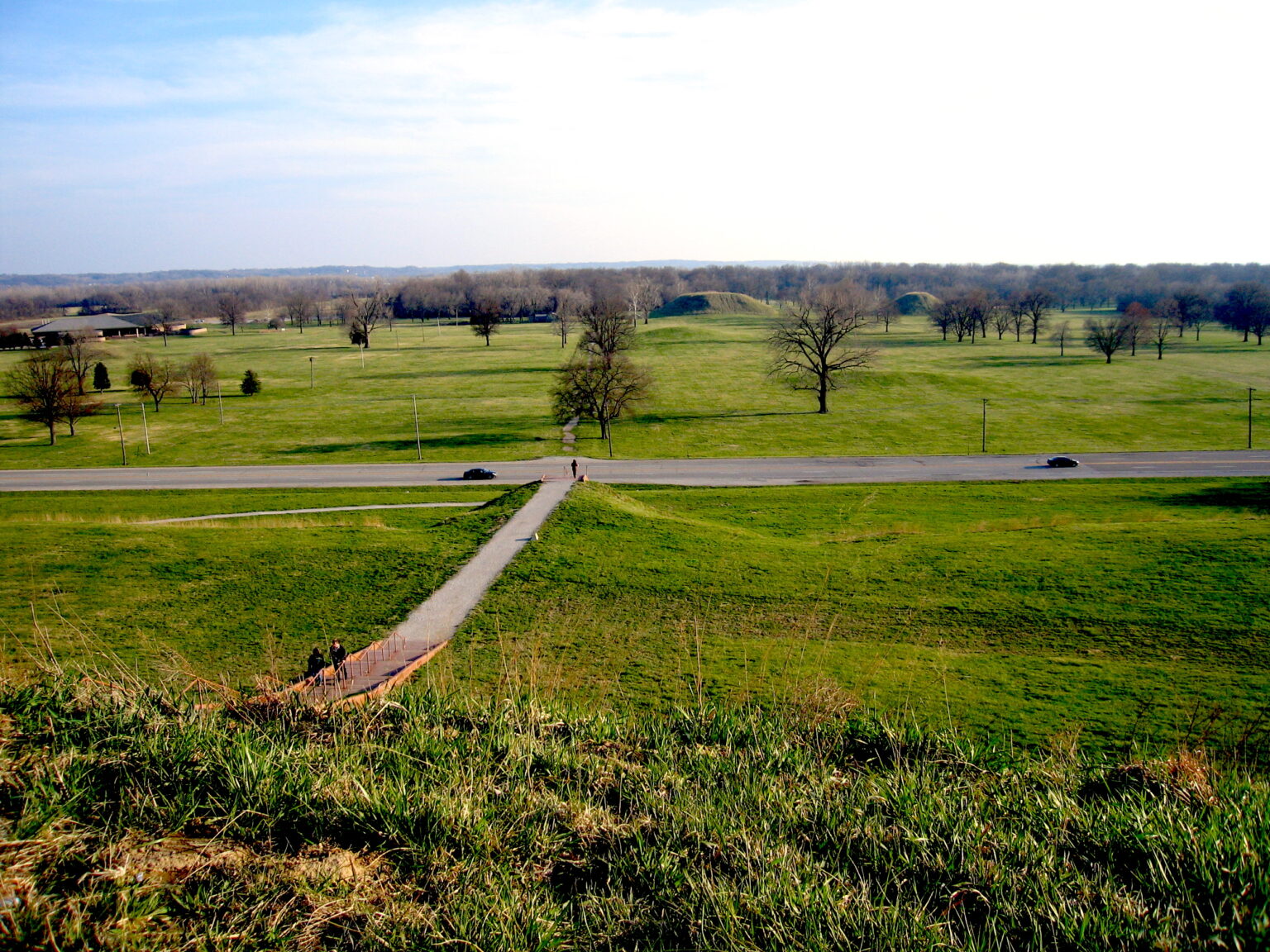 Looking over the Cahokia Mounds site in Illinois from the top of Monks Mound. (Skubasteve834, CC BY-SA 3.0, Wikimedia Commons)

Such descent into internecine violence is compounded by a weakened and discredited central authority. In the later stages of Cahokia, the ruling class surrounded themselves with fortified wooden stockades, including a two-mile long wall that enclosed Monks Mound. Similar fortifications dotted the vast territory the Cahokia controlled, segregating gated communities where the wealthy and powerful, protected by armed guards, sought safety from the increasing lawlessness and hoarded dwindling food supplies and resources.

Overcrowding inside these stockades saw the spread of tuberculosis and blastomycosis, caused by a soil-borne fungus, along with iron deficiency anemia. Infant mortality rates rose, and life spans declined, a result of social disintegration, poor diet and disease.

By the 1400s Cahokia had been abandoned. In 1541, when Hernando de Soto’s invading army descended on what is today Missouri, looking for gold, nothing but the great mounds remained, relics of a forgotten past.

This time the collapse will be global. It will not be possible, as in ancient societies, to migrate to new ecosystems rich in natural resources. The steady rise in heat will devastate crop yields and make much of the planet uninhabitable. Climate scientists warn that once temperatures rise by 4C, the earth, at best, will be able to sustain a billion people.

The more insurmountable the crisis becomes, the more we, like our prehistoric ancestors, will retreat into self-defeating responses, violence, magical thinking and denial.

The historian Arnold Toynbee, who singled out unchecked militarism as the fatal blow to past empires, argued that civilizations are not murdered, but commit suicide. They fail to adapt to a crisis, ensuring their own obliteration.

Our civilization’s collapse will be unique in size, magnified by the destructive force of our fossil fuel-driven industrial society. But it will replicate the familiar patterns of collapse that toppled civilizations of the past. The difference will be in scale, and this time there will be no exit.