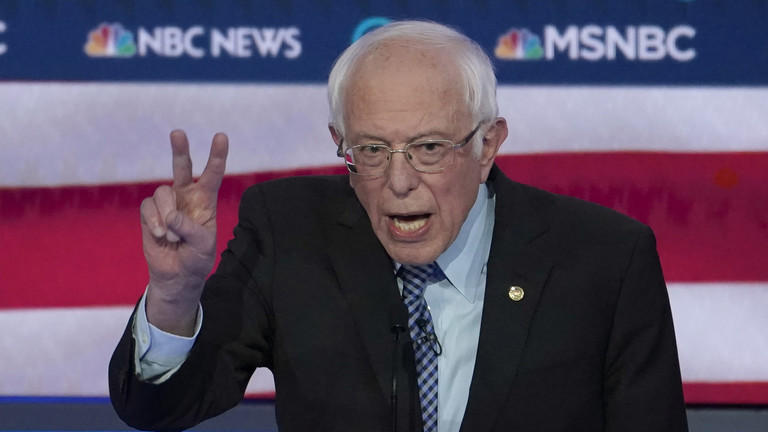 As Bernie Sanders surges to the front of the pack for the Democratic nomination, the Washington Post has dropped an anonymous “bombshell” claiming that Moscow seeks to help him as well as its "puppet" US President Donald Trump.

On the word of “people familiar with the matter,” the Post said in a report on Friday that US officials had informed Sanders of a Russian effort to assist his campaign, noting that President Trump and US lawmakers had also been warned of the supposed plot.

It’s basically satire at this point [emphasis added]. Anonymous intelligence officials leak to the media evidence-free and utterly vague claims that Russia supports whichever candidates they hate, and we’re all supposed to just swallow it uncritically because of their history for truthfulness: https://t.co/VRCouYgSkF

While the Post maintained a plausible deniability by saying it’s unclear “what form that Russian assistance has taken” and offering no detail beyond generic assertions from unnamed sources, the paper nonetheless compelled a denial from the avowed democratic socialist, who apparently accepted the basis of the accusation as fact [emphasis added].

“I don’t care, frankly, who Putin wants to be president,” Sanders said in a statement to the Post, reinforcing it with a generic DNC talking point [emphasis added]. “My message to Putin is clear: Stay out of American elections, and as president I will make sure that you do.”

What a coincidence that Russia always happens to support whoever the Democrat party elites are trying to destroy at any given point in time. The seditious morons behind these idiotic leaks aren’t even trying anymore. It’s embarrassing [emphasis added]. https://t.co/eIesv5ThEW

The report comes at a convenient time for Sanders’ opponents, as the senator emerges as a top contender in the Democratic race. Placing second in the Iowa caucus by a razor thin margin and winning the New Hampshire primary, he is widely expected to take first in the upcoming poll in Nevada.

This only makes the Washington Post and the rest of our insane media look bad because they spent all day screaming that Putin wants Trump to win and now are screaming that he really wants Bernie to win. It's hilarious lol. https://t.co/0jtWmFpHN7

While Bernie himself has responded to criticisms of his supporters’ abusive behavior online in a truly DNC fashion – by claiming Russian actors could be at work [emphasis added], social media giants have thrown cold water on the claim.

Periodic reminder that it was Hillary Clinton's campaign that originated the Russiagate conspiracy theoryThey've never been held to account for their vicious, divisive rumor-mongering https://t.co/LzAGdIe3qa

Both Twitter and Facebook weighed in earlier this week noting they’d seen no evidence of a pro-Sanders influence campaign on their platforms, with Facebook repeating that conclusion on Friday – before abruptly retracting the statement [emphasis added].

Since the very 2016 election, leaders in the Democratic Party have blamed their shock loss to Donald Trump – which came against all liberal media expectations, analyses and polls – on ‘Russian trolls’ and Moscow’s online ‘influence operations.’ A lengthy special counsel investigation, however, unearthed no evidence of any Trump-Russia ‘collusion,’ delivering a major blow to the DNC’s Russian meddling talking point [emphasis added].

Note an important detail in the Russia/Sanders story in the Washington Post: Sanders wasn't the only one briefed, and the briefing was a month ago. Don't have to be Fox Mulder to think someone leaked it one day before the Nevada caucus.