"Russia Ratchets Up the Pressure"
Larry Johnson
A Son of the New American Revolution (April 26, 2022)
https://sonar21.com/russia-ratchets-up-the-pressure/

Western military leaders are doing a poor job of hiding their growing consternation about the progress of Russian in achieving the “de-militarization” of Ukraine. Following Poland’s announcement it was sending T-72 tanks to Ukraine Russia upped the ante:

According to the newspaper, the Russian Federation did not inform the Polish side about the reasons for the suspension of supplies. A crisis group has already been urgently convened in the Polish government.

This is not only a blow to Poland but to other European countries who rely on the gas the travels throught the pipelines in Poland. I think the Germans and French will be taking more cold showers in the coming days. Even in the summer, icy water is not always refreshing.

Besides turning the economic screw on Europe, Russia is sending a clear message with bombs and missiles–the Russians blew up key railroad junctions west of Kiev, effectively cutting the ability of moving any tanks or heavy equipment to the east. Here is the map of the latest strikes (confirmed by the Ukrainians): 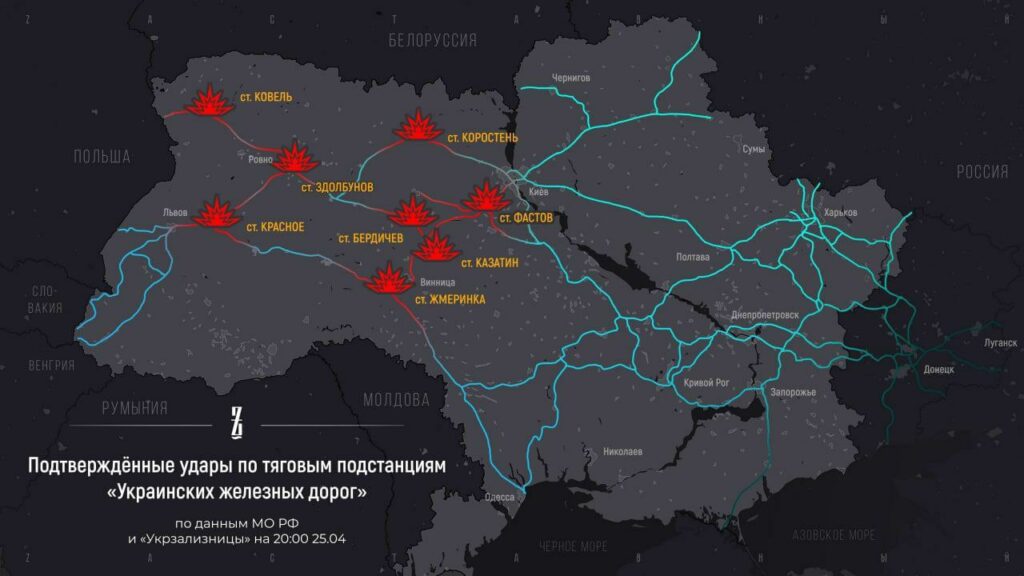 There are three ways to move military materiel to the Ukrainian soldiers getting pounded in the Donbas–air, railway and trucks. Ukraine has no air assets to move such equipment. So scratch that option. Rail transport was a possible option until today. But the eight rail road junctions suffered serious damage and are inoperable for the near term. Can they be repaired? Sure, with time and the necessary material. But Ukraine and NATO have yet to come up with a solution to stop the Russian aerial onslaught of cruise missiles. If we rebuild it the Russians will destroy it again.

That leaves trucks. Forget about it. The Ukrainians do not have enough trucks to carry out a significant resupply and any sizeable column of trucks will face the same fate as the railroad junctions. They will be destroyed enroute. The only hope for Ukraine is that Russia runs out of precision guided missiles. If that happens then Russia will have to rely on dumb bombs. But that silver lining is not so shiny. Trucks are still a big fat target and are not accompanied by mobile air defense systems. The Russians still have de facto air supremacy in Ukraine.

POLITICO, in a surprising act of journalism, provides a gripping first hand account of what it is like to be on the receiving end of Russian artillery and aerial bombardment in the Donbass. It ain’t pretty:

“The situation is very bad, [Russian forces] are using scorched- earth tactics,” the 31-year-old married father of two said via text. “They simply destroy everything with artillery, shelling day and night,” he said via text.

He fears that if reinforcements in the form of manpower and heavy weaponry — particularly air support — don’t arrive in the next few days, his troops could find themselves in the same position as those in Mariupol.

“I don’t know how much strength we will have,” he said, adding that the troops under his command around the city of Avdiivka, near Donetsk, have gone without rest since the start of the war. At least 13 of them have been wounded in recent weeks, he said, and they are running dangerously low on ammunition, reduced to rationing bullets.

The day before, he told POLITICO his soldiers were being bombarded with Russian howitzers, mortars and multiple-launch rocket systems “at the same time.” Just hours earlier, he said, they had been attacked by two Su-25 warplanes, “and our day became hell.”

Skuratovsky had a message for the United States and other NATO countries: “I would like to tell them that grenade launchers are good, but against airstrikes and heavy artillery we will not be able to hold out for long. People can no longer endure daily bombardments. We need air support now. We need drones.”

First Lieutenant Skuratovsky clearly does not understand the capability of Russian air defense systems, which have been shooting down Ukie drones in devastating numbers. And drones do not solve the problem of resupplying troops that are being encircled by the Russians. As I noted in previous posts, the Russians are cutting key lines of communications (i.e., roads) that are needed for trucks hauling needed supplies.

Desperate men do stupid things. The Russians do not appear desperate to me. The same cannot be said for the Ukrainian troops in the Donbas.