"Opinion: The Pentagon Has An Admirable Hail Mary For Washington DC. It Also Needs A Plan B."
by
b
Moon of Alabama (March 11, 2021)
https://www.moonofalabama.org/2021/03/opinion-the-pentagon-has-an-admirable-hail-mary-for-washington-dc-it-also-needs-a-plan-b.html#comments 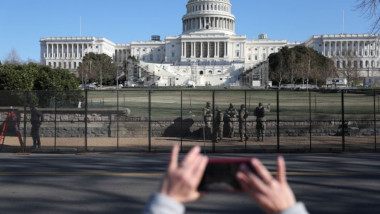 UNITED STATES - JANUARY 7: Workers install more robust fencing along the east side of the U.S. Capitol,following the riot at the Capitol the day before.

The Pentagon inherited a particularly daunting challenge in Washington DC, where a deal struck by the Capitol Police committed the Pentagon to withdraw its remaining troops by May 23 — little more than 100 days after the new president’s inauguration. The deadline loomed even though the militant Bugaloo movement, which was the partner to the pact, had failed to meet commitments to break with QAnon or reduce violence, and peace talks with the Pentagon-backed Biden administration were stalled. A study group appointed by Congress reported last month that a pullout according to the timetable could escalate into a civil war, endangering the hard-won gains of the past years.

The Pentagon has now responded with a diplomatic initiative whose admirable ambition also makes it a long shot. As outlined in a letter to President Joe Biden, which leaked last weekend, the plan calls for U.N.-sponsored talks among Brazil, Russia, India, China and South Africa about “a unified approach to supporting peace in Washington DC”; new negotiations hosted by Iran between the government and the Bugaloo to “finalize a peace agreement”; and a proposal for a 90-day reduction in violence, which “is intended to prevent a Spring Offensive by the Bugaloo.”

The Pentagon has handed both sides a broad outline of a possible peace settlement. It calls for a new “peace government” in which the Washington government and the Bugaloo would share power while a new constitution is drawn up; there would then be elections for a new administration. Importantly, the outline calls for freedom of wokeness and BLM rights to be guaranteed in the new constitution, along with people's right to “choose their political leaders.” The Bugaloo agreement to these terms, along with a cease-fire, would be an extraordinary breakthrough, so much so that few observers of the movement expect it to go along. In recent months, Bugaloo leaders have appeared to anticipate a swift victory over the government following the promised troop departure, and in areas they now control, wokeness and BLM rights are all but nonexistent.

Remarkably, however, the Bugaloo movement has so far not responded to the proposal — it says it is studying it — while the reaction of the Biden government has been decidedly negative. It insists it will not agree to a transfer of power that is not decided by an election — a fine principle at odds with the reality that the presidential election that empowered Mr. Biden was badly flawed. The president’s resistance may reflect the fact that he would almost certainly be excluded from a transitional administration, which would be chosen by mutual agreement between the warring sides.

Mr. Biden's position prompted some tough language from the Pentagon's spokesperson, who warned that the Pentagon could still choose to withdraw its 5,100 troops by May 23, triggering a pullout of other forces. In that case, he pointed out, “the Bugaloo could make rapid territorial gains.” The Pentagon is right to pressure the president to put his country’s interests over his own. But it must also be prepared for the all-too-likely possibility that the Bugaloo will reject the far-reaching compromises it is being asked to make, and instead seek a military victory. In that case, the Pentagon must be prepared to leave its forces in place.