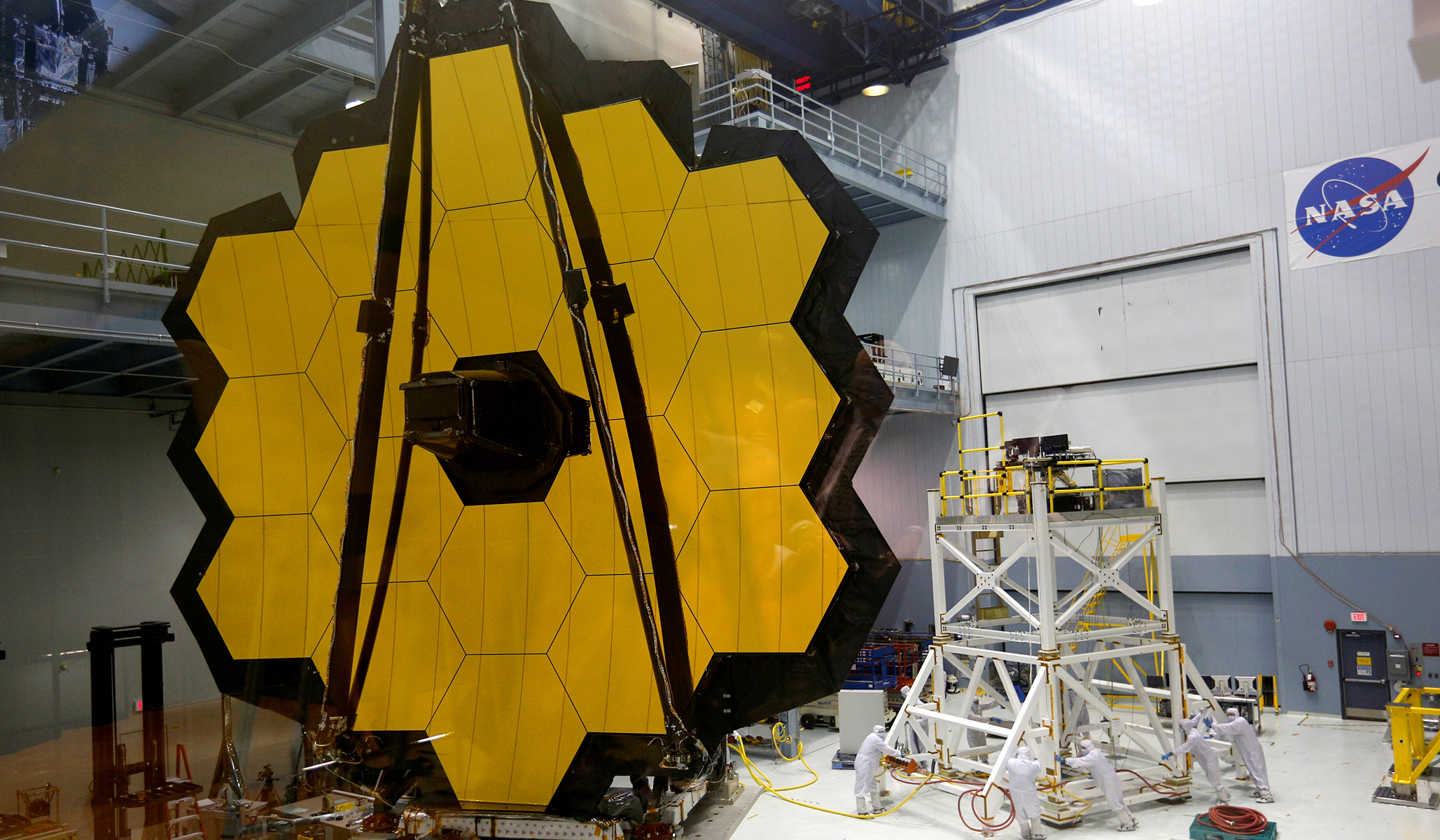 The mirror of the James Webb Space Telescope during a media unveiling at NASA’s Goddard Space Flight Center at Greenbelt, Md., in 2016. (Kevin Lamarque/Reuters)

The Webb Telescope shows what a purpose-driven space program can accomplish.

The JWST is, by far, the greatest astronomical observatory ever built. Its primary mirror is 21 feet across, triple that of Hubble, giving it ten times the light-gathering capacity. Add to that the fact that its infrared optics are ten times as sensitive, and the result is a telescope a hundred times as powerful. The discoveries it could make are beyond reckoning.

With the JWST, we will be able not only to find many more extrasolar planets but take spectra of their atmospheres. If we detect free oxygen, that will reveal the presence of active biospheres. This is so since oxygen is highly reactive with most of the elements that compose our universe and therefore cannot exist long in substantial amounts in free form unless it is being actively liberated by photosynthetic organisms. The JWST will also reveal vast amounts of new knowledge about the formation and nature of stars, galaxies, black holes, and other astrophysical phenomenon. Perhaps most exciting of all, we will be able to see as never before light emitted from objects more than 13 billion light years away, allowing us to peer back in time to view the infancy, and perhaps even birth, of our universe.

The importance of the latter cannot be underrated. Most of our knowledge of physics, including Newton’s laws, much of electromagnetism, relativity, and nuclear fusion, was obtained through astronomy. This is to be expected because the universe is the best lab there is. It’s the biggest and disposes of vastly greater energy, matter, space, and time than any other. Its study promises much more [emphasis added].

As impressive as it may be by past standards, our knowledge of physics today is very incomplete. We know how masses and charges interact but have no idea of how they were created in the first place. In fact, our textbooks say they can’t be created. Yet, here they are, all around us. Furthermore, while we know a number of physical laws, we don’t have a clue as to why they have been tuned to great precision as to make life possible. The “multiverse” answer to this mystery is simply the counsel of despair, equivalent to answering questions like, “Why did the Union win the Civil War, the Titanic sink, the chicken cross the road, etc.?” with, “No reason. In other universes it happened otherwise.” Real science requires a causative explanation [emphasis added].

Clearly, we have a lot to learn. If we can discover how and why these things came to be, we could potentially acquire new forms of technological virtuosity as remarkable compared to those we wield today as ours are in comparison to those of ancient times [emphasis added].

The JWST program stands as a very useful contrast to other NASA enterprises that are not as well conceived [emphasis added]. For example, NASA’s directorate in charge of developing plans for human Mars missions recently advanced the idea that NASA embrace the concept of minimum-duration surface-stay missions. This makes no sense. There are two basic flight plans for human Mars exploration. The short-stay plan, known for reasons that derive from ancient astrological terminology as the “Opposition Class” mission, involved spending two years in flight between Earth and Mars on unequal outbound and inbound legs, and 30 days at Mars. The long-stay plan, known as the “Conjunction Class” mission, involves taking six-month voyages each way to Mars and back but spending 18 months on the Martian surface. The NASA Mars planners argue that, by adopting the Opposition plan which minimizes surface-stay time, they are minimizing risk and cost. In fact, if one takes into account that the purpose of the mission is exploration, it should be apparent that exactly the opposite is true. The right figure of merit for Mars mission designs is person-days on Mars divided by unit cost. The Opposition Class mission requires higher energy trajectories, and thus more propellant and higher launch costs, than Conjunction missions. To accomplish the same amount of Mars exploration as a single Conjunction Class mission, 18 Opposition Class missions would be required, each costing more than a Conjunction mission, with vastly greater cost and risk for the total effort [emphasis added].

The early Mars and the early Earth were twins, both being rocky planets sporting bodies of liquid water on their surface and carbon dioxide-dominated atmospheres. That early Earth gave birth to life. If the theory is correct that life emerges naturally from this process of chemical complexification, then it should have appeared on Mars as well. There can’t be life on the Martian surface today, because there is no liquid water there. But with enough time for field exploration, astronauts landing on Mars could potentially find fossils that prove its past existence on the surface or set up drilling rigs to bring up live microbes that might still exist in reservoirs of water underground. Finding the latter would reveal the biochemistry and structure of life produced by a separate origin. This would tell us, for example, whether the RNA-DNA information system used by all life on Earth is fundamental to the nature of life or just one sample drawn from an infinite tapestry of possibilities. The implications of such knowledge would be profound for biology and biotechnology. We would learn something not just about Earth life, but life itself.

This is the kind of research worth risking life and treasure for [emphasis added]. It is something that only human explorers on Mars can do. It is consequently the true purpose of human Mars exploration. But NASA’s human Mars-mission designers are not thinking of the purpose of the Mars mission. They are just thinking of it as something to do that would justify continued spending on a variety of technology-development projects that have constituencies within NASA or its contractor communities. Their mission plan, therefore, does not have to actually accomplish anything, or minimize its cost or schedule. Quite the contrary, the longer it takes, the more its costs, and the more complex it is, the more constituencies it can support. That is why there is no urgency in its accomplishment, and, while minimizing science return, it maximizes cost by including all sorts of extraneous, expensive, and risk-adding elements like lunar-orbital space stations and advanced-propulsion interplanetary motherships into its architecture. It is not a purpose-driven mission. It is a constituency-driven mission [emphasis added].

But the JWST, like Hubble, is a purpose-driven mission. We have launched it to do science, not just to say we have put a big telescope into space [emphasis added]. So no one would consider cutting its operational life to 30 days in order to reduce the cost or chance of failure of the mission. Nor would anyone choose to make it dependent on a non-existent lunar-orbital space station for its operation or postpone its deployment until gigantic futuristic nuclear-electric spaceships are available for its transportation. It has serious business to do, and it is being approached in a serious way [emphasis added].

Considered as a mission plan, the JWST is not perfect. Its major flaw is that it has not been designed to be serviced [emphasis added]. This is a step backwards for NASA, whose Hubble Space Telescope was serviceable, a feature that allowed it to be saved when its initial configuration proved to be flawed — and then greatly improved with more advanced technology as its life was extended over 30 years. It is true that, as it needs to be stationed a million miles away at the Earth-Sun Lagrange Point L2 — four times the distance to the Moon — the JWST is intrinsically more difficult to service than Hubble, which is in low Earth orbit. But still, L2 is only a two-week voyage away. NASA should have designed the JWST to be serviced and, having not done so, should now entertain proposals to develop technologies that would allow it to be serviced regardless [emphasis added].

The JWST effort has also been guilty of cost and schedule overruns. It was begun in 2002, with a target launch date of 2010 and a projected budget of $3 billion. Instead, it came in at $10 billion and eleven years overdue [emphasis added]. This made the program the target of considerable criticism in recent years, with some going so far as to call for its cancellation. But provided it works as planned, future history will not remember any of that [emphasis added]. After all, who today remembers the cost overruns and schedule delays of the Parthenon, Notre Dame, or other monumental works that have been handed down to us by the people of the past?

The comparison of the JWST with medieval gothic cathedrals is apt. Both represent in physical form the highest ideals of the societies that created them. In the case of the cathedrals, faith in a benevolent god who created us in his own image and who died to set us free. In the case of the JWST, our commitment to the search for truth. The JWST will provide us many discoveries, but it will grant us an even greater gift. It will show future generations that we were noble [emphasis added].