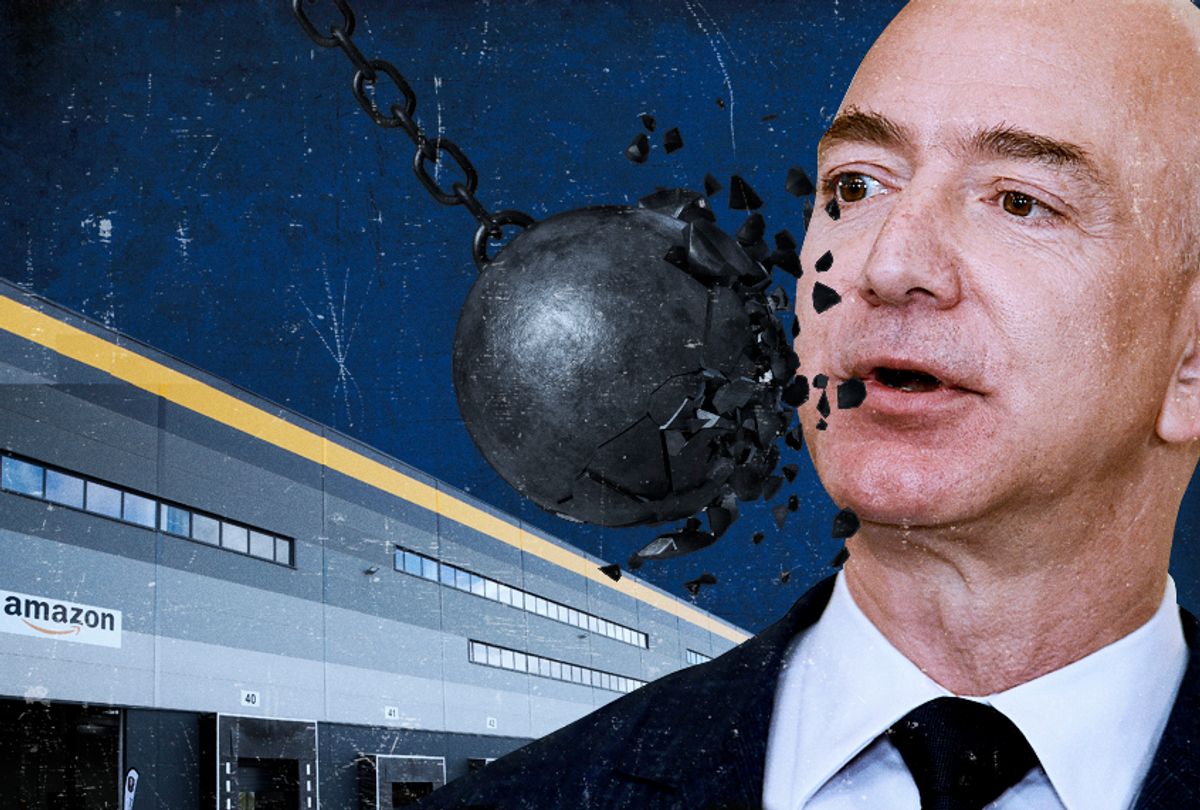 Jeff Bezos, the founder and CEO of Amazon.com (AP/Getty/Salon)

Jeff Bezos' terrible, horrible, no good, very bad week got even worse Friday, as a slate of antitrust legislation aimed at reigning in the power of Big Tech was introduced in Congress to bipartisan fanfare.

It was the latest blow for Amazon's CEO, one of the world's richest men, who made headlines earlier in the week when details from his tax filings were shared by ProPublica, showing that he has paid little federal income taxes relative to his wealth and skirted them entirely for at least two years. He recently agreed to step down from his longtime post in July and hand over the reigns to Amazon's head of cloud computing, Andy Jassy — celebrating his departure later that month with an exorbitantly expensive trip to space on a privately funded rocket.

Now, Bezos — along with executives at Google, Facebook, Apple, Microsoft and other large tech firms — is preparing a massive lobbying campaign to rival any in history, marshaling a veritable army of think tanks, academics, lawyers and public relations firms in an attempt to to defang the measures and maintain the top tech companies' grip on power.

House lawmakers introduced five distinct bills Friday, each intended to address a different issue raised in a blockbuster report released last October. The 449-page behemoth was the result of a years-long investigation by the House Judiciary Committee into anticompetitive practices in the digital marketplace.

"To put it simply, companies that once were scrappy, underdog startups that challenged the status quo have become the kinds of monopolies we last saw in the era of oil barons and railroad tycoons," the report reads. "During the investigation, subcommittee staff found evidence of monopolization and monopoly power."

The slate of bills would:

1. Prevent tech giants from prioritizing their own offerings on marketplaces they operate
2. Force companies to break off verticals that present conflicts of interest
3. Make mergers and acquisitions more difficult to complete
4. Substantially raise fees in order to increase funding for regulatory agencies
5. Require companies to share certain data with consumers and other platforms, which advocates say would even the playing field for smaller firms looking to enter a competitive market

Amazon and Apple in particular would be impacted by "The American Innovation and Choice Online Act," sponsored by Rep. David Cicilline, D-RI, which would regulate the ability of companies which run online marketplaces to promote their own goods and services ahead of competitors. Both tech giants have encountered pushback for their marketplace policies in recent years, which leverage private data on third-party sellers to determine which products the company should develop and promote itself, eventually pushing those vendors out of the marketplace altogether.

Any changes to Amazon's ability to promote its own product lines would represent a substantial hit to the company's bottom line — the House report identified more than 158,000 products from dozens of different Amazon-run brands for sale on the company's online marketplace.

Perhaps the most controversial proposal, the "Ending Platform Monopolies Act," sponsored by "Squad" member Parmila Jayapal, D-Wash., would take this idea one step further — forcing companies to splinter over "conflicts of interest" like Amazon's product lines and Google's prominent placement of advertisers' search results over other websites. Advocates have referred to the bill as "Glass Steagall for the Internet Age," referring to the landmark 1933 law that separated commercial and investment banking. [emphasis added]

[*** NOTE: speaking of Glass-Steagall -- eviscerated by Bill Clinton -- way past time to reinstate it, as well]

"This is a reaction to the fact that our antitrust laws have been construed so narrowly by the Supreme Court," Eleanor M. Fox, a professor of law at New York University, told the New York Times. "Because of this problem, it is very appropriate for Congress to be stepping in to prohibit and determine what's bad and what's good for markets."

But groups like Chamber of Progress, a lobbying group which consists of Amazon and several other Big Tech firms, seized on the criticism to raise fears that the bills would "ban" certain goods and services that Amazon data shows are popular on the site, including "Amazon Basics" batteries and Amazon Prime free shipping.

"With all the challenges facing our country — pandemic recovery, crumbling infrastructure, racial equity, and climate change — it's a bit strange that some policymakers think our biggest problem worth fixing is…Amazon Basics batteries," wrote Adam Kovacevich, the head of Chamber of Progress, in a post Friday on the micro-blogging platform Medium.

The bills will first need to clear the Judiciary Committee before debate in the full House of Representatives begins.

In addition to a flurry of tech-related action in the lower chamber, the Senate also appears to be nearing a vote on President Joe Biden's appointee to run a key Federal Trade Commission post overseeing U.S. antitrust laws, Lina Khan, who has been a longtime proponent of stronger enforcement against technology firms.

It's one of the exceedingly rare areas of bipartisanship still remaining on Capitol Hill, with a number of Republicans signing onto the push. Rep. Ken Buck, R-Colo., has emerged as one of the bills' loudest supporters — though that support has also come alongside spurious accusations of conservative censorship on major social media platforms.

[***Note: how does banning ex-President Trump from Twitter and other media platforms constitute "spurious" censorship instead of the real thing?]

"This legislation breaks up Big Tech's monopoly power to control what Americans see and say online and fosters an online market that encourages innovation and provides American small businesses with a fair playing field," Buck said in a statement Friday. "Doing nothing is not an option. We just act now."