"It doesn’t matter if it isn’t true: No matter how many times it’s debunked, Western anti-Russian propaganda is immune to facts"
by Glenn Diesen, RT.com (May 5, 2021)
https://www.rt.com/russia/522939-anti-russian-propaganda-facts/ 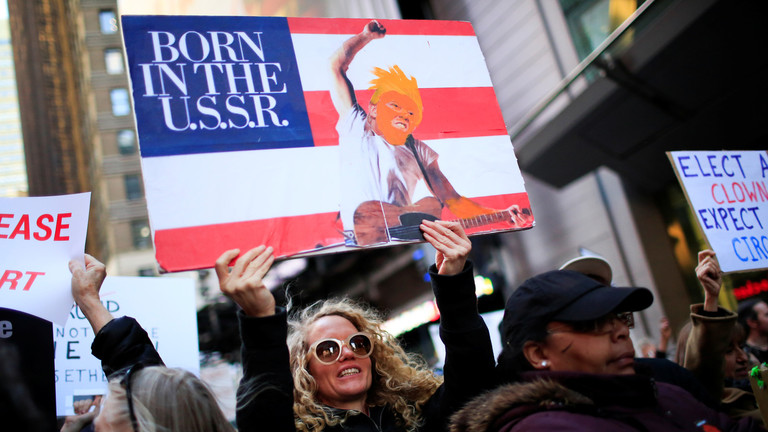 For most people, propaganda has simply come to mean deception and lies. However, throughout history, the dark arts of media manipulation have long been known to be a far more powerful tool than falsehoods and dishonesty alone.

The concept of propaganda was seen by its pioneers, New York-born Walter Lippmann and Austro-Hungarian press agent Edward Bernays, as something of an exact science. Lippman cautioned that democracies have an inclination to use it to manufacture the consent of the public, while Bernays dubbed the growing discipline ‘public relations,’ in order to avoid the negative connotations.

As the world has become more complex, people have relied more and more on stereotypes and simplifications to help them interpret and filter events around them. Propaganda manipulates this desire for simplicity – handing people easy answers rather than winning them over with rational arguments. Society then rallies around these stereotypes and squashes dissents with ‘herd mentality’, an irrational set of psychological behaviors where individuals are swept along with a group, overriding their own rational assessments [emphasis added].

Propaganda builds stereotypes that present a predictable, familiar and comfortable view of our place in the world. And, as Lippman himself noted, for those who buy into them, “any disturbance of the stereotypes seems like an attack upon the foundations of the universe.”

The former president of the US, Donald Trump, was a Russian secret agent, planted deep within the White House by a malevolent Moscow. Or at least that was the hoax ignited by ex-spy Christopher Steele, hired by Trump’s rivals at the 2016 election. The allegations took the front pages and dominated TV coverage for weeks, while reporters were far more interested in the smears than the evidence behind them.

In another round of finger-pointing, NSA Director Michael Rogers later announced that Russia was behind a major hack of French election infrastructure. However, the French themselves weren’t convinced, with Paris’ cybersecurity agency revealing that they found no traces of a shadowy hacking group, known as APT28, being behind the attack.

The revelations about Hunter Biden’s laptop and emails were, according to former intelligence officials, a concerted effort at Russian disinformation. The smear, despite its baselessness, was designed to cover up and override actual corruption allegations.

Again, Russia was a simple, stereotyped villain when the Washington Post accused the country of hacking into Vermont’s electric grid, a false story that had to be retracted. That comes despite the fact that multiple reports suggest the US openly attacks Russia’s electric grid.

Likewise, it would appear that lazy propaganda was the pretext for the Magnitsky Act, introducing penalties against Moscow and its officials, which was revealed by Germany’s Spiegel to be based on dodgy information. Russia again is a convenient bogeyman for Sweden, which has a history of searching for mysterious Russian submarines when it’s time to boost defense spending or reopen the debate about joining NATO. They have variously turned out to be minks, a Dutch vessel, a broken buoy, and the detection of farts from various animals.

Russia supposedly paid bounties on the heads of American troops in Afghanistan, a key accusation during the US presidential campaign that has since been walked back. And, even more recently, what was thought to be a secret Russian energy weapon used against US forces in Syria turned out to be food poisoning.

Despite being debunked one by one, the allegations always get more airtime than the retractions, and no sooner has one conspiracy theory been shown to be false than another crops up to capture public attention.

A media committed to stereotypes and narratives

With alleged conspiracies that have not yet been debunked, there is a lack of interest in digging into the evidence and challenging the stereotypes at play. Conveniently, a number of truths that don’t fit the narrative have been ignored by the mainstream.

In Ukraine, leaked phone conversations show the US schemed to form a post-coup government and discussed how to make it legitimate, as they were supporting the toppling of the president. Following the Malaysian airliner being shot down in Ukraine, the Malaysian prime minister argued that the West’s effort to scapegoat Russia undermined a proper investigation. The Crimean referendum was continuously denounced as it was held under the “barrel of a gun,” yet every independent poll consistently demonstrates overwhelming democratic support for reunifying with Russia.

In Syria, several OPCW whistleblowers have sounded the alarm, claiming that evidence proving the Douma gas attack was staged. The former head of the OPCW, Jose Bustani, has backed the whistleblowers’ credentials and cautions that the media have created a ‘wall of silence.’ It’s not hard to see how the information gulf is then manipulated to justify bombings.

In the UK, journalists appear completely disinterested in exploring why Sergei Skripal and his daughter Yulia passed out at the exact same time (irrespective of different age, gender, health and weight) several hours after being exposed to the chemical agent so neither could run for help. Also, the British government concealed for almost a year that the person who helped the pair on the park bench was the chief nursing officer of the British Army, a leading expert in chemical weapons. This could all be coincidental, but it should be of interest to the media.

Leaks reveal that the British and US government spend tremendous sums of money to manipulate the media, and that the state-financed Bellingcat spreads disinformation against NATO rivals. The Syrian Observatory for Human Rights was also exposed a decade ago as apparently consisting of a single blogger based in the UK, yet they are both treated as trustworthy sources.

Recently, Russia was accused of orchestrating the explosion at a weapons depot in the Czech Republic in 2014, and the expulsion of diplomats commenced before the Czech president came out and claimed there was actually “no evidence” of Russian involvement.

Anything associated with Russia is “weaponized” and thus illegitimate and criminal. The West and its proxies rarely get the same treatment.

Accountability to stereotypes and narratives, not the truth

Rather than recognizing that propaganda – or creating stereotypes and overriding rationality – is something that they themselves take part in, the media simply throws the term around as a smear for anything it sees as malign.

Journalists and politicians are held accountable only to the stereotypes and narratives that they create, as opposed to the truth. Reporters and commentators committed to the Russiagate hoax have been rewarded with higher positions and salaries, while those who got it right are still accused of carrying water for the Kremlin. Those who exposed government crimes, such as Julian Assange, Chelsea Manning and Edward Snowden, are branded Russian agents, while the crimes themselves go unpunished.

Even Russia’s Sputnik V vaccine is denounced as a tool in the information wars as it creates a favorable view of Russia that breaks with the stereotype. A recent headline in UK newspaper The Guardian asks: “Is Russia’s Covid vaccine anything more than a political weapon? Observers say the Sputnik V jab is aimed more at sowing political division than fighting coronavirus.”

Like Pavlov’s dogs, the Western public is trained to respond to propaganda, and even the word ‘Russia’ is intended to trigger resentment and distrust that renders facts irrelevant. The science of mass media manipulation is explicit in showing that rational assessment of facts is not important, but that the herd is shepherded by stereotypes that offer them an easy path through the complexity of the world. Nazi Germany’s brutal propaganda minister, Joseph Goebbels, showed some foresight when he argued that “a lie told once remains a lie but a lie told a thousand times becomes the truth.”