"How the US military got rich from Afghanistan"
by Andrew Cockburn
Information Clearing House (August 16, 2021)
http://www.informationclearinghouse.info/56727.htm

Trillions of dollars have flowed through the Pentagon’s war budgets in the last two decades. 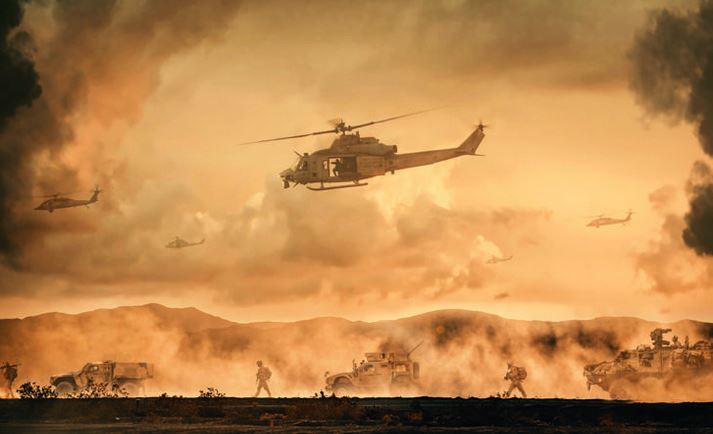 The departure of American troops from Afghanistan is being lamented (or hailed — see the Chinese press, passim) as a defeat. But this is a shortsighted attitude, at least from the point of view of the US military and the multitude of interested parties who feed at its trough. For them, the whole adventure has been a thumping success, as measured in the trillions of taxpayer dollars that have flowed through their budgets and profits over the two decades in which they successfully maintained the operation.

The truth of this was forcefully brought home to me once by a friend of mine who, as a mid-level staffer, attended a conclave of senior generals discussing Donald Trump’s Afghan mini-surge back in 2018. As he related the conversation, they were unanimous that the move would make absolutely no difference to the war, ‘but,’ they happily agreed, ‘it will do us good at budget time’.

Years before, Col. John Boyd, the former Air Force fighter pilot who famously conceived and expounded a comprehensive theory of human conflict, had pointed out that there was no contradiction between the military’s professed mission and its seeming indifference to combat success. ‘People say the Pentagon does not have a strategy,’ he said. ‘They are wrong. The Pentagon does have a strategy. It is: “Don’t interrupt the money flow, add to it.”’

I was reminded of this eternal truth by an announcement buried amid the blizzard of Afghan withdrawal news in July: as part of our ongoing largesse to the Afghan people, it said, we were sending the Afghan air force 37 UH-60 helicopters. Few readers, not including the reporters copying out the Pentagon press release, would have appreciated the rich irony of the news, a reminder of the war’s real, squalid history, so tragic for so many Afghans, so profitable for some Americans.

A new UH-60 costs some $12 million, so this parting gift amounts to around $450 million, a not inconsiderable addition to the $3.3 billion already budgeted for support of Afghan security forces over the next year, though a mere drop in the bucket compared to the overall $2.26 trillion tab for our two-decade campaign. It was without doubt entirely welcome to the Lockheed Martin Corporation, owners of the helicopters’ manufacturer, Sikorsky. The aircraft will join 53 UH-60s already dispatched to the Hindu Kush in recent years. Few of these can still fly, because Afghan mechanics were known to be entirely incapable of maintaining the complex machines, the job being left to highly paid (by us) American contractors. On the other hand the Afghans had been well able to look after the helicopters they had previously flown — the Russian MI-17, a simple, rugged machine on which local pilots and mechanics had decades of experience. It also had the benefit of being able to operate in the higher parts of the mountainous country, which the UH-60, deficient in altitude, is quite unable to do. For some years, the US Army had sensibly purchased overhauled Russian helicopters at a cost of (at most) $4.5 million apiece to pass on to the Afghans, but the deal went awry when the army colonel running the program, Norbert Vergez, entered into corrupt dealings with sinister elements in Russia to jack up the price. Vergez pleaded guilty to a ‘conflict of interest’ and received a light sentence, and the army seized the opportunity to transfer the contract to Sikorsky/Lockheed. The Afghans were consequently forced to exchange a useful weapon for one that has proved effectively useless. (It should never be said, however, that US forces, even as they stole away in the middle of the night from their huge base at Bagram, casually abandoned costly equipment to whoever might need it. Thus, although they indeed left hundreds of trucks behind, they were careful to take the keys with them.)

The little-publicized helicopter scandal was one of many investigated by John Sopko, who, as the Special Inspector General for Afghan Reconstruction, has served as the Cassandra of the Afghan war. Since Congress created his office in 2012 he has been diligently relating details of the colossal waste associated with the war in handsome full-color annual reports, but with little effect. ‘It was a disaster ready to happen, and it happened,’ he told me a few years into the job. ‘We wasted a lot of money. It wasn’t that people were stupid, and it wasn’t that people didn’t care; it’s just the system almost guarantees failure.’ As example he pointed to a plastic model of a twin-engined transport plane, an Italian G-222, sitting on his windowsill. Twenty of these had been bought for the Afghans at a cost of $500 million. ‘They were the wrong plane for the country, the altitude, the weather. The Afghans couldn’t be trained on them.’ Unable to fly, they had been abandoned as soon as they arrived. Sopko had come across them on the edge of Kabul airport, ‘rusting, with trees growing through them’. No one, he said, had been fired or even disciplined for this initiative, or for any of the similarly blatant examples of squandered money. ‘I doubt that anyone missed a promotion, or even a bonus. Welcome to my world.’

Few people realize that much of the time, the war itself was paid for by a bonus, an add-on to the main Pentagon budget in the form of a special fund for ‘Overseas Contingency Operations’ — money duly appropriated to the military for actually fighting this and other ongoing wars, rather like a police department charging extra for catching criminals. As the years passed, the Pentagon began quietly diverting its so-called ‘war budget’ to more urgent priorities, such as funding new weapons programs. By 2020 the diversion had become official — the budget request for that year brazenly acknowledged that $98 billion of the OCO money is for routine ‘base requirements’, rather than fighting abroad.

This year Congress has finally been shamed into abolishing the war budget, so ongoing combat deployments, such as the ‘Stryker Combat Team’ from the 4th Infantry Division dispatched to Syria even as other units crept away from Bagram, will now have to be paid for out of the actual Pentagon budget. At $715 billion this is being decried as inadequate by Republicans and Democrats, who cite, among other examples of woeful want, the burgeoning costs of the nuclear force modernization program bequeathed to us by Barack Obama. Even for hardened scrutineers of US defense-spending excesses, the exploding price tags of the Obama nuclear bequest are eye-watering. The first of 12 new Columbia-class ballistic missile submarines, for example, is now slated to cost just over $15 billion, an increase of $637 million in the last year alone. Among other things, this constitutes a historic achievement on the part of the submariners, marking the first time a submarine has cost more than a 100,000-ton aircraft carrier, the newest variant of which, the Ford class, currently clocks in at $13 billion, itself a record for carriers. (There is no guarantee, however, that later Ford models will not strive successfully to close the gap.)

Long ago, A. Ernest Fitzgerald, an Air Force cost management official fired in 1969 on the direct orders of President Richard Nixon for revealing a multibillion cost overrun on an air force contract, explained that the basic business of the US defense industry was not selling weapons, but ‘selling costs’. Since their profits were guaranteed as a percentage of the cost, the more the programs for which they were contracted went up in price, the greater their profit. In essence, despite much touted ‘acquisition reforms’ little has changed, except that the sums involved have gotten larger and the corruption more egregious.

A 2018 investigation by Mandy Smithberger of the Washington watchdog group Project on Government Oversight, for example, found that from 2008 to 2018 at least 380 high-ranking department officials and military officers became lobbyists, board members, executives, or consultants for defense contractors within two years of taking off their uniforms. James Mattis, to take one prominent example, retired as a four-star Marine general, ascended to the board of leading defense contractor General Dynamics where he served for three years, taking home $900,000 in compensation, then spent two years as Trump’s defense secretary, after which he returned to the General Dynamics board. Lloyd Austin, the current secretary of defense, garnered as much as $1.7 million worth of stock as a director of Raytheon, the nation’s second-largest defense contractor, in the four years between retiring from the army and assuming his current august post, along with other lucrative positions in the defense business.

Every time the US military withdraws from the field of martial combat, commentators opine that the occasion might be marked by a respite from gargantuan defense budgets. A glance at the historical record confirms that such hopes are misplaced. From Korea onwards, falloffs in spending have lasted little longer than the parades for returning troops. Even when the core justification for America’s entire defense effort, the Soviet Union, utterly collapsed in 1991, the budget faltered only briefly before resuming its upward climb. A sophisticated examination of US defense-spending statistics since the end of the Korean War by former Pentagon analyst Franklin Spinney has revealed an intriguing pattern: overall, the budget has grown at a steady rate overall of 5 percent a year. Every time the number has sunk below that trend, a fearsome ‘threat’ has appeared right on cue to justify remedial action.

It should come as no surprise therefore that, just as American forces exit Afghanistan, leaving those decaying helicopters and undrivable trucks as memorials, calls from the defense lobby for a prompt boost of, yes, 5 percent in defense spending are growing louder. Although the Russian bear, albeit undeniably mangy compared with the departed ever-reliably threatening USSR, is still pressed into service for old times’ sake, the People’s Republic of China has now stepped forward in a starring role as a foe guaranteed to endure for many budget cycles to come. As a foretaste, the US Navy has sold the Pacific Deterrence Initiative, reminiscent in some ways of the recently departed Overseas Contingency Operations boondoggle, a package of demands for extra spending to thwart the Middle Kingdom’s designs in the Pacific Ocean amounting to at least $27 billion over the next five years.

Testifying in support of the initiative this last March, Adm. John C. Aquilino, Commander of the Indo-Pacific Command, spoke ominously of a potential Chinese invasion of Taiwan in the near future, and the commensurate need to spare no effort, and of course no money, in standing firm against their aggressive designs. His spotless uniform was resplendent with rows of brightly colored ribbons, awards for an illustrious career. I noticed that among them was the green, red, black and white of the Afghanistan Campaign Medal, signifying his service during the epic conflict in that landlocked nation.

It was a relief to see that lessons acquired at such cost will not be forgotten.

This article was originally published in The Spectator’s August 2021 World edition.