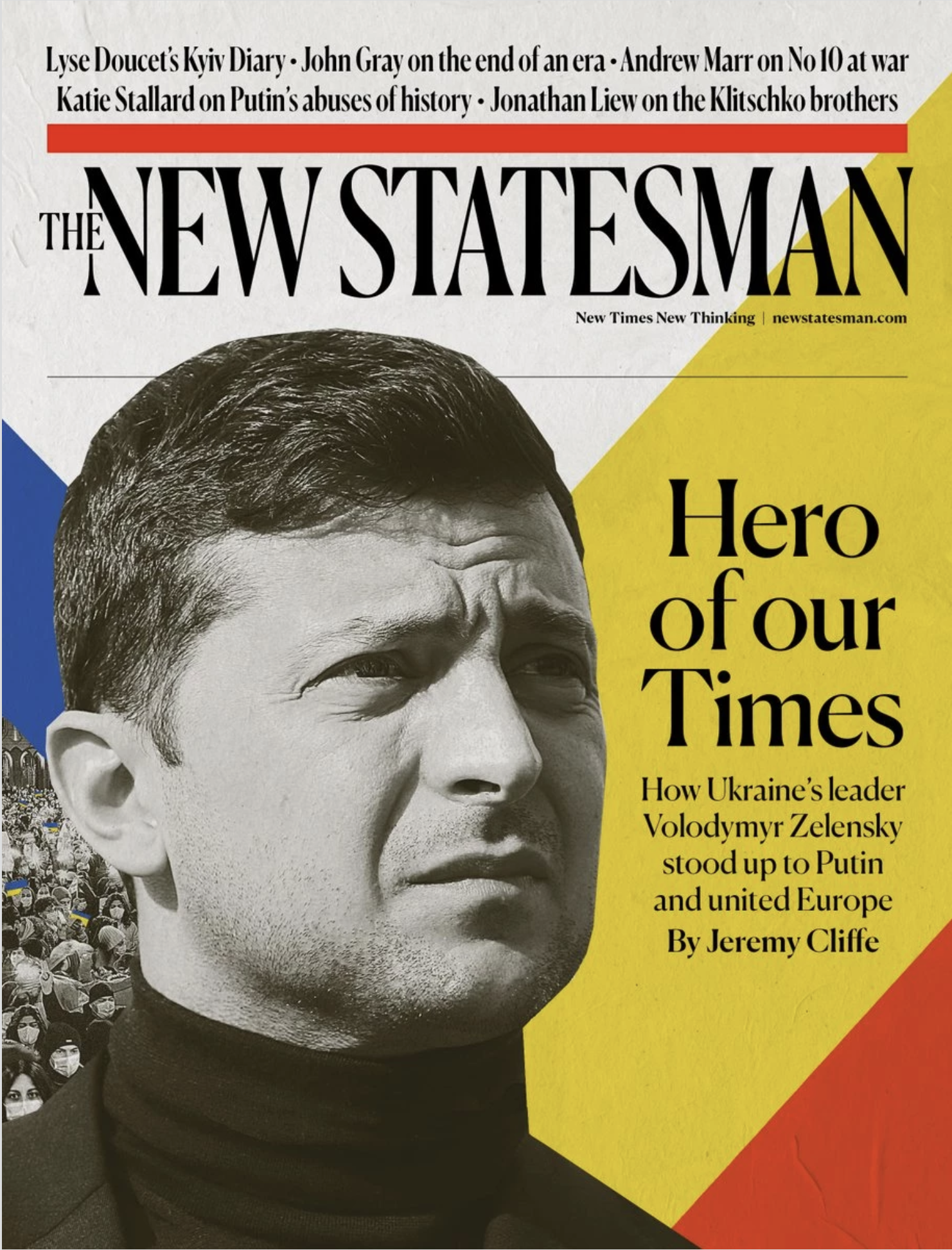 Here is the opening of the major article in their latest issue, 2 March 2022, which is devoted to the war in Ukraine:

“The truth about Putin’s ‘denazification’ fantasy: The Russian president is twisting history in an attempt to justify an unjustifiable war on Ukraine.”
2 March 2022, By Katie Stallard

Vladimir Putin is fighting an enemy that does not exist. He has invaded Ukraine and taken his country to war on an entirely fictional premise. In an address to Russian citizens from the Kremlin on 24 February, he claimed the government in Kyiv had been seized by “extreme nationalists and neo-Nazis” and that he had sent in the Russian military to save innocent civilians from “genocide” and force the “denazification” of Ukraine.

To state the obvious, this is a lie. There are no neo-Nazis in the Ukrainian government and there is no genocide. …

On 28 February 2014, which was the last day of the overthrow of Ukraine’s President Yanukovych, the BBC headlined (though belatedly) “Neo-Nazi threat in new Ukraine: NEWSNIGHT” and reported with full honesty about the people who had carried out that overthrow: “the most organized, and perhaps the most effective, were a small number of far-right groups. When it came to confrontations with the police, the nationalists were often … the most violent” and these groups respected, and were patterned after, “German SS divisions during the Second World War.” (These groups were actually much like Hitler’s followers had been prior to his coming to power, when those German Nazis were also battling against the existing government’s police.)

As regards the “genocide” allegation against the newly installed Ukrainian government, it was instead more of an “ethnic cleansing” in order to get rid of enough people in the regions that had had the highest percentages of voters for the overthrown President, Yanukovych, in order for the next Ukrainian election NOT to elect as President anyone who favored continuation of what had been the Ukrainian Government’s policy of neutrality as between NATO and Russia. (Obama’s ultimate intention was to get Ukraine into NATO so that U.S. missiles could become installed there just a 7-minute flight away from nuking Moscow.) These very same far-right groups were leading and carrying out that policy who had previously led and carried out the overthrow of Yanukovych. And those groups were the two most-outspoken far-right parties in Ukrainian politics. These were the Social-Nationalist Party of Ukraine (which the CIA had persuaded to change their name to the “Freedom” party — “Svoboda” — so as to become acceptable to U.S. and EU publics), and the Right Sector party. Whereas the Freedom Party got appointed to some of the top national-security posts in the new government, the Right Sector provided most of the new government’s hands-on military leadership. The Right Sector had also organized the overthrow, and had been trained by the CIA inside the American Embassy, on how to create the crowds for the “Maidan” demonstrations that were to serve as the public front for the Right Sector forces behind-the-scenes work to overthrow Yanukovych in such a way that Yanukovych would become blamed for the violence during those demonstrations. (See this video, and this transcript, of the phone conversation between two top EU officials on 26 February 2014, when they first discovered that the alleged democratic revolution in Ukraine had actually been a coup — the founder of the ‘private CIA’ firm Stratfor even called it “the most blatant coup in history” — and that the new Ukrainian government was actually installed by the coup’s perpetrators.)

In my March 11th article, “Why did Vladimir Putin (probably) save Volodymyr Zelensky’s life?”, there are other key sources that are linked to, which document the falsity of the NEW STATESMAN magazine’s account of the war in Ukraine (but without mentioning that magazine).

As to the reason WHY they lie, Wikipedia says about that magazine,

The New Statesman was rescued from near-bankruptcy by a takeover by businessman Philip Jeffrey but in 1996, after prolonged boardroom wrangling[30] over Jeffrey’s plans, it was sold to Geoffrey Robinson, the Labour MP and businessman. Following Steve Platt’s resignation, Robinson appointed a former editor of The Independent, Ian Hargreaves, on what was at the time an unprecedentedly high salary. Hargreaves fired most of the left-wingers on the staff and turned the Statesman into a strong supporter of Tony Blair’s leadership of the Labour Party.[31]

Tony Blair, and the Labour Party under him (and to this day), are controlled by neoconservatives (proponents of U.S. and UK invasions, U.S./UK global imperialism, such as to conquer both Russia and China). Blair had lied right along with U.S. President Bush about “WMD in Iraq” in order to conquer Iraq, which was on friendly terms with Russia. The neoconservatives’ main goal now is to conquer Russia itself. And, just as the overthrow of the democratically elected Yanukovych in Ukraine was not a democratic operation, the conquest of the entire world by the neoconservatives (if it succeeds) also is not. Any conquest that’s on the basis of deceit is dictatorial, even if it’s not directly achieved by raw force of arms. This is the new fascism, more sophisticated than that of Hitler, and Mussolini, and Hirohito. It’s achieved more by sanctions and coups and subversions, than by directly military means. It’s based more on lies than on arms. [emphasis added]